MP Arvind Sawant says, 'Political turbulence is going on in Maharashtra, many MLAs defected and have gone to Assam. We have initiated legal action against them and notice has been served to 16 MLAs till now' 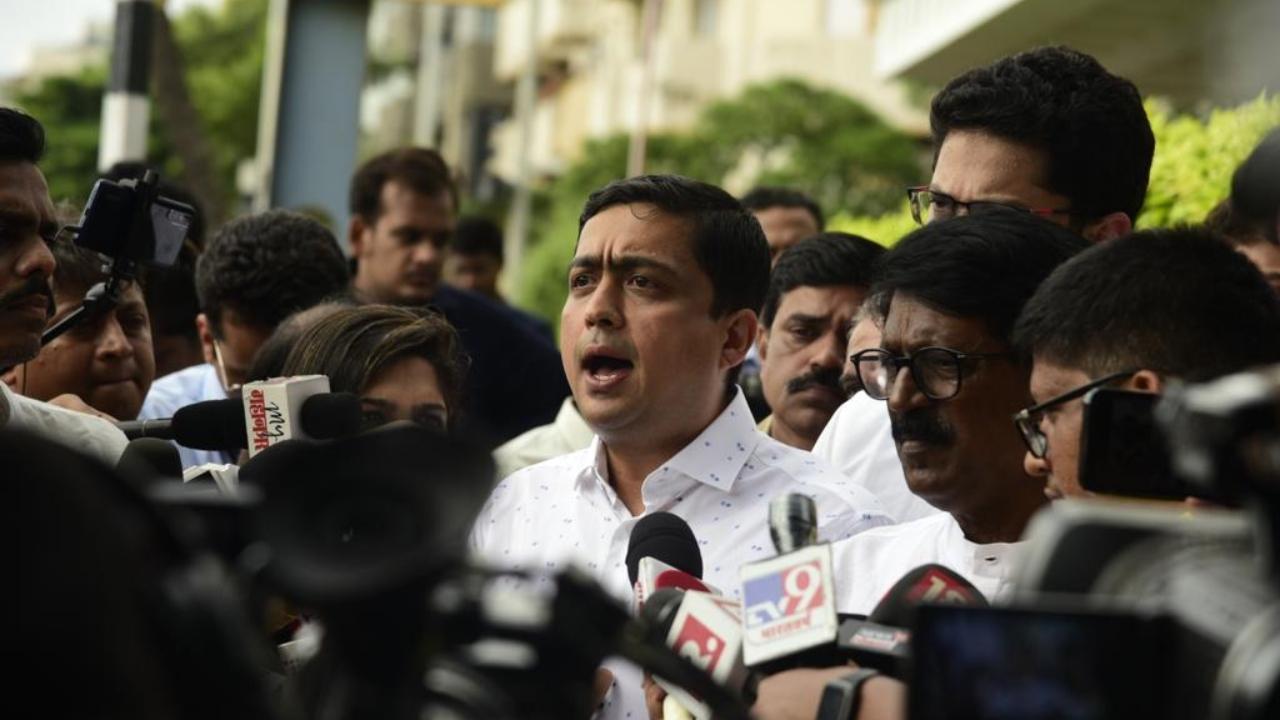 Devdutta Kamath and Arvind Sawant briefing media about legal action to be taken against rebel MLAs in Mumbai. Pic/Atul Kamble


Amid the political crisis in Maharashtra, Shiv Sena MP Arvind Sawant informed that the party has initiated legal action and served notices to concerned MLAs.

Sawant said, "Political turbulence is going on in Maharashtra, many MLAs defected and have gone to Assam. We have initiated legal action against them and notice has been served to 16 MLAs till now."

Advocate Devdutta Kamat, Shiv Sena's Senior Counsel said, "Proceedings have been initiated by Shiv Sena against 16 MLAs, under the provision in the Constitution which says that if a person gives up the membership of a party then he's eligible for disqualification."

"There were several meetings that were called by Shiv Sena at different times, none of which were attended by them. Visiting BJP-ruled states, meeting BJP leaders, and attempting to topple government amounts to a violation by rebels," Advocate Devdutta Kamat said.

Kamat said the concept of 2-3rd (to surpass anti-defection law) applies only if there is a merger. "Until the MLAs, don't merge with another party, disqualification applies. Till today there's no merger, they have voluntarily given up membership," Adv Devdutta Kamat said.

Notably, the national executive meeting of the Shiv Sena on June 25 passed six resolutions giving absolute rights to Maharashtra Chief Minister and party president Uddhav Thackeray to take action against the rebels to bring the revolt within party under control.

The advocate said that under the constitution, the deputy speaker has the power of the speaker in the latter's absence and can adjudicate on such matters. "No confidence motion was sent through an unauthorized email address by rebels," he said.

In a jolt to the Maha Vikas Aghadi government in Maharashtra, senior Shiv Sena Minister Eknath Shinde and other rebel MLAs revolted against the party on Monday night and camped in Surat. The rebel MLAs have shifted base to a hotel in Guwahati.

Meanwhile, party MP Sanjay Raut on Thursday said the Sena is ready to quit the MVA government if the group of rebel legislators camping in Assam returns to Mumbai in 24 hours and discusses the issue with Chief Minister Uddhav Thackeray.

"You say you are real Shiv Sainiks and will not quit the party. We are ready to consider your demand provided you come back to Mumbai in 24 hours and discuss the issue with CM Uddhav Thackeray. Your demand will be considered positively. Don't write letters on Twitter and WhatsApp," said Raut.

(with inputs from ANI)