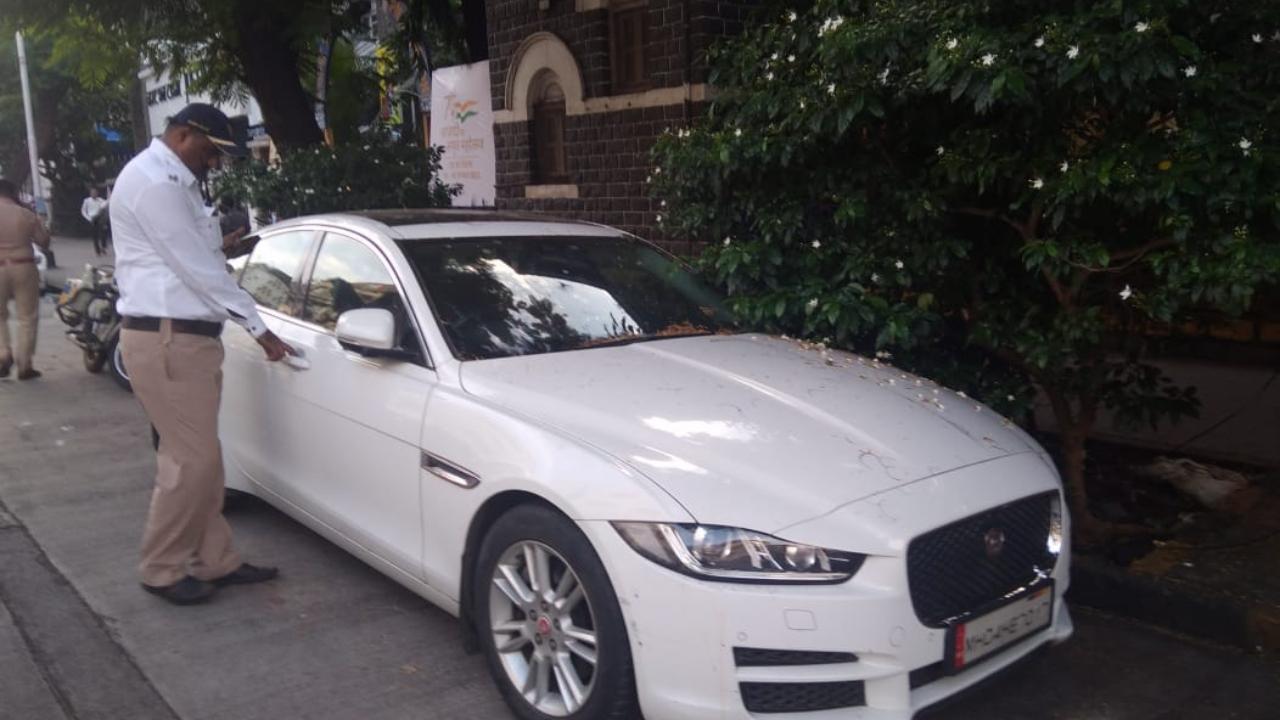 A cop from Colaba traffic division with the Jaguar, whose registration number MH 04 HE 7017 matched with that of a two-wheeler.


A tiny horizontal line that transformed an ‘F’ into ‘E’ was behind 11 e-challans sent to a biker, who was sure he had not violated any traffic rules. The Colaba traffic police recently came across a Jaguar car bearing the number identical to that of the two wheeler which was causing all the trouble to the biker. Following the revelation that car owner has been booked for forgery.

The owner of a Bajaj Avenger bike, with registration number MH 04 HE 7017, recently complained to the traffic police that he had been receiving messages from time to time for the past four - five years asking him to pay fines for motoring infractions. He insisted he had not flouted the mentioned road safety rules.

The traffic police then fed his vehicle details and registration number into their system.

On Tuesday, Assistance Police Inspector Hindurao Choudhary of Colaba Traffic division found a white Jaguar with the registration number MH 04 HE 7017 parked on the footpath of Merryweather Road under their jurisdiction. When Choudhary keyed the vehicle’s number into their e-challan machine to penalise the driver, an alert popped up that the vehicle has been using a forged number.

The cops then tracked the car user, Adnan Sayeed, who said the vehicle belongs to his father. The police asked him to produce the RC book of the car which showed the actual registration number as MH 04 HF 7017.

The police said Marine Lines resident Sayeed, who is in his early 20s, is a businessman and uses the car. He has been booked under section 417 (punishment for cheating), 465 (forgery), 468 (forgery for purpose of cheating) and 471 (using as genuine a forged document) of the Indian Penal Code (IPC), said police.

According to the police, Sayeed claimed to be the second owner of the vehicle and that he never realised that the car’s registration number was wrong.

Vijay Hatiskar, senior PI of Colaba police station, said the accused has been using the car since 2017. “We will verify all the facts,” he said.

When Mid Day contacted Sayeed he said, he got a secure number plate made after buying the car in 2017. “I never realised that the car number was wrong. Few years back I was even caught on Bandra Worli Sea Link and was told there was a pending fine of R1,200 on my number. I paid the fine and still no one realised that it was on the two-wheeler.” Sayeed claimed that he got his car serviced a few times where they verify all the car's credentials before servicing it but even the service centre missed the discrepancy.

He said even the Colaba cops could not figure out what exactly was wrong at first place when their e-challan machine issued an alert. “It was clear only when the biker was called to the police station and upon checking it became clear that ‘F’ had been turned into ‘E’.

“It doesn't seem that the car owner had deliberately changed the number. It seemed to have happened by mistake which remained unnoticed for all these years,” said a police officer.