Mumbaikars, here’s what to do with your ghar ka tiranga

Even as citizens wonder what to do about flags after I-Day, city NGO offers to collect them from housing societies and care for them as per Flag Code of India 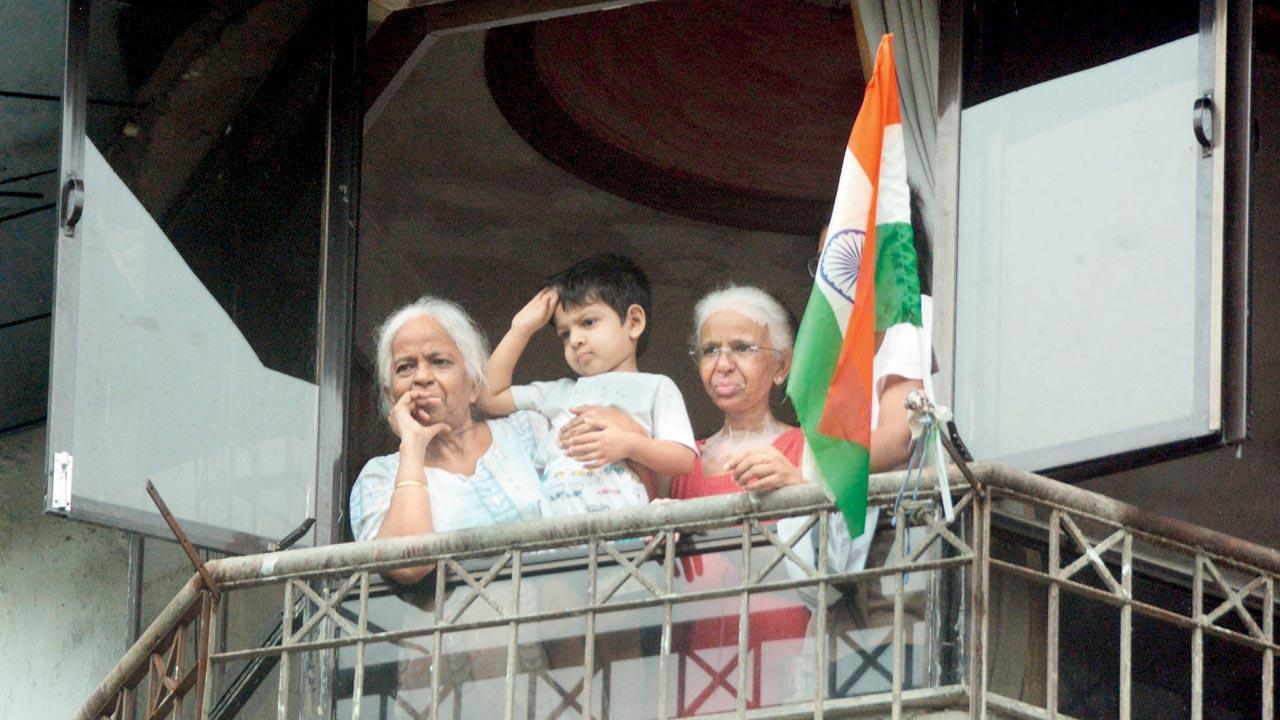 A child salutes the national flag as people march past his house on Monday, even as a flag flutters on his balcony. Pic/Satej Shinde


Even as social media churned furiously on Independence Day, with Har Ghar Tiranga anthems, themes and pictures swarming phones and computer screens, messages also did the rounds about how to correctly “fold” and store the Tiranga. As people wonder what to do with the flags post-August 15, an NGO, My Green Society, has volunteered to collect them from societies across Mumbai and Thane and care for them, following the guidelines of the Flag Code of India.

Amid widespread concerns about what to do with the Tiranga after I-Day, numerous tutorials doing the rounds online are teaching people the correct way to fold the flag and preserve it. The Flag Code has a section about how to respectfully dispose of the flag. “Even though one has guidelines, there are a lot of groups, individuals, housing societies and organisations wondering what to do with the flag they have post-August 15,” said Vishal Tibrewala, director, My Green Society. 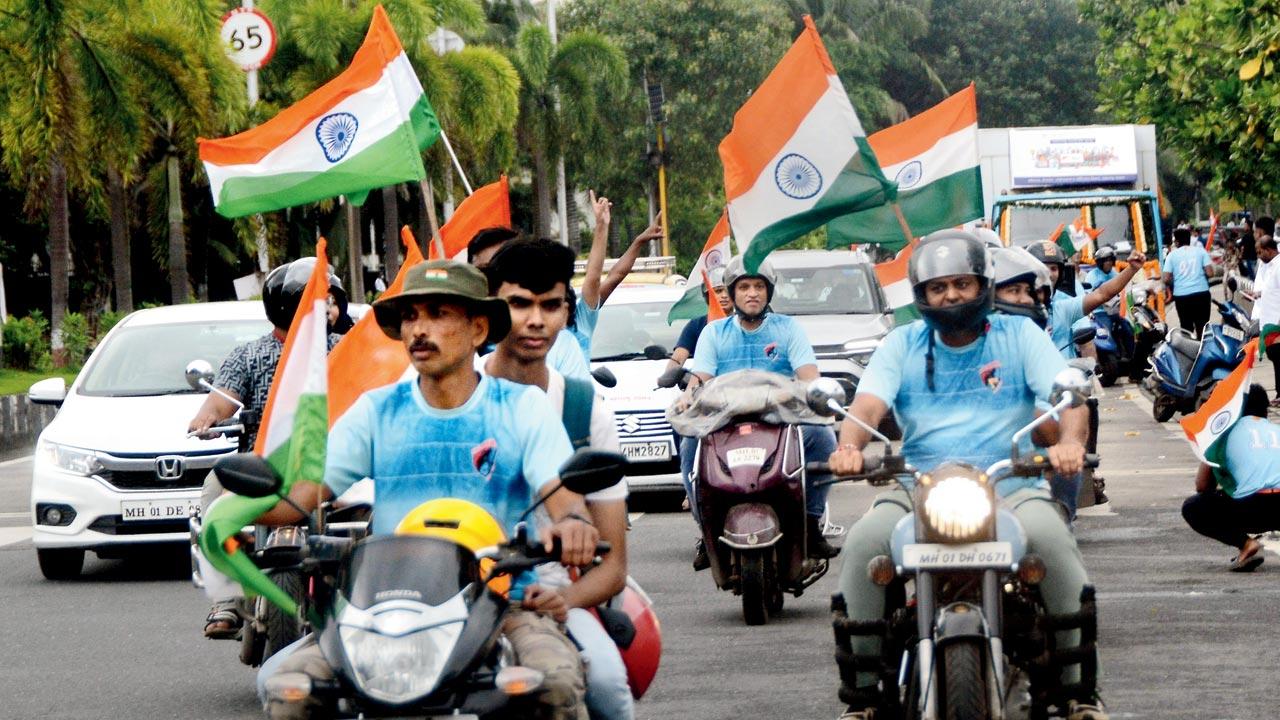 Tibrewala added, “We have a three-man director team. There is me, Ashok Goel and Sushil Jajoo. When we felt the pulse of the city, we saw that people were excited about Har Ghar Tiranga campaign and the response, as Monday proved, was massive. We sensed uncertainty, too, though, about what people are supposed to do with the national flag. We started an awareness campaign, one that will gather steam in the next few days, about our willingness to collect these flags and then, of course, follow flag etiquette.”

The Green Society plans to have a 20-bike team that will disperse to different locations once the campaign begins, bring back the flags to certain venues and then into one place. The team said, “We will either store them in a warehouse or distribute them to the rural areas in Maharashtra, in the villages bordering our city, as many may not have got the flags. The locals will of course be told how to correctly display it, in case they want to hoist the flag or the right way to store it.” My Green Society team added that damaged flags are to be disposed of with dignity, either burnt or buried according to the Code. “Our personnel can do that, too, if needed,” said Tibrewala. 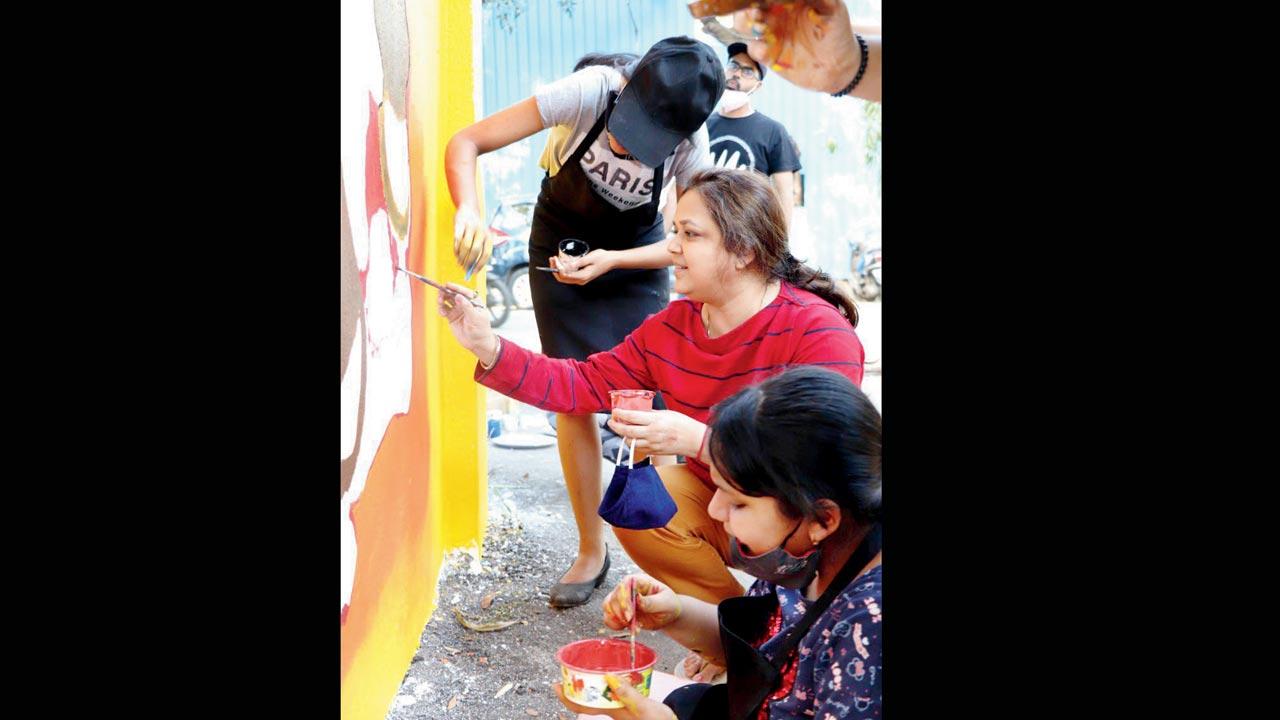 If walls could speak they would say environment is all important

The three entrepreneurs, leaders of My Green Society, who decided to start their organisation for a Carbon Neutral Bharat, began 18 months ago. “We all thought we must give back something to society,” they said. My Green Society’s mission is to work towards making India a carbon neutral country by 2070, and it has several campaigns to its credit. The Andheri East outfit has a go-green initiative that is about increasing green cover, their go-blue campaign is about reducing water pollution and water conservation, and there is a go-brown campaign that is about reducing, recycling and managing waste.

Tibrewala said, “The national flag collection will be our first, and since word has gone out, there has been a flurry of calls from people, seeking us out to take the flag. I want to tell all those about the Har Ghar Tiranga campaign that you may have packed away the flag, even decided to give it to us… whatever your decision, keep it in your heart forever. When you are about to throw something on the road, stop and think about the nation. When you are going to cross the rail tracks think about whether these are the actions that befit a proud Indian. If you see an older person falling on the road, and simply pass by without trying to help then, this is certainly not the spirit of Har Ghar Tiranga,” he added.

The NGO leaders concur that without the will to be more disciplined and better oneself every day, simply flying flags, though uplifting, may be tokenism. As they work on the logistics of their collection drive beginning very soon, the big message is: Har Ghar Tiranga may have been for a few days, but har dil tiranga should be forever.

20
No. of bikers who will go around collecting flags

Next Story : Mumbai: Give us our 7.47 am AC local back, demand Dombivlikars