Central and Western Railway contact manufacturers who are working on solutions; CR runs 56 AC services while WR runs 79 of them 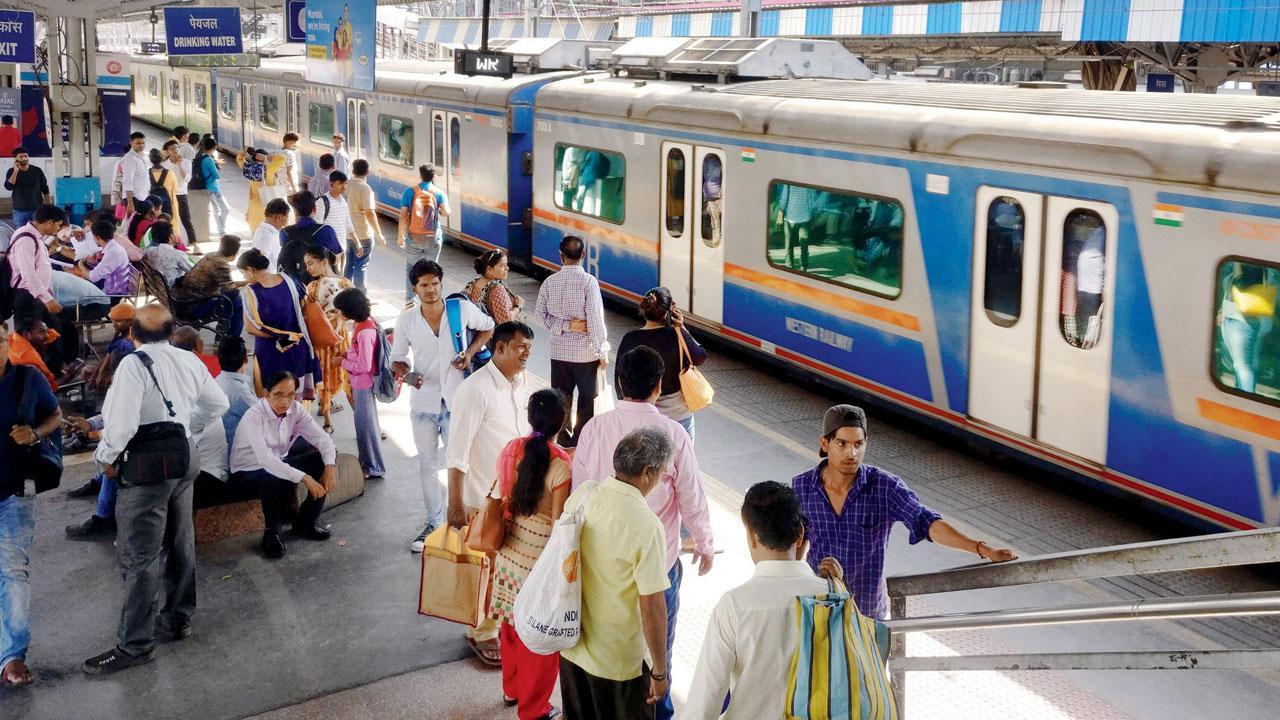 The Western Railway in October announced that its passenger numbers on AC local trains had crossed 1 crore since April 1, reaching a new milestone. File pic/Nimesh Dave


The set of 13 AC local trains in Mumbai are reportedly of substandard quality and have several issues causing problems and irregular services. The Central Railway has written to manufacturers Integral Coach Factory, Chennai, listing problems, while Western Railway has informed them internally. Both CR and WR are working with team ICF to improve the rakes. On Wednesday on Central Railway, commuters complained as about 14 AC local services were cancelled due to snags, leading to a lot of inconvenience.

Among the various problems listed include leaking ducts, non-functioning cooling systems, issues with door sensors, design fault in roof-top AC, defects in compressor and poor finishing and fittings. In fact, in September 2022, passengers onboard a running AC Churchgate-Virar local had a close shave, after the main heavy-luggage rack installed above the window came crashing down.

“We have written to the manufacturers listing all the concerns, and teams from the ICF and railways are working on resolving problems together. Given the fact that it was for the first time AC trains are in use, there were many issues which local workshops are unaware of. The issues are now being resolved and fixed permanently," a senior CR official said.

While CR runs 56 AC services, WR runs 79 of them. AC local trains have been a hit with commuters, and the Western Railway in October announced that its passenger numbers on these trains had crossed the 1 crore mark in the financial year since April 1, reaching a new milestone. AC local trains on CR have also been popular, but protests and political intervention led to curtailment of services and new trips are not being introduced despite demand.

“There is additional demand from both Borivli and Dombivli, but the railways are not able to cater to it. Also, on many occasions like today, AC train services are suddenly cancelled and replaced with normal trains leading to problems. We have bought AC season tickets for a reason and if the railways are unable to sustain a good service, they better discontinue it,” Ravindra Gehlot, a regular commuter on AC local trains said. Railway officials said if a train is found to have a snag, it is replaced with a regular train service since there are limited number of AC trains and they were working on minimising recurring snags.

Officials said the existing local trains have been prototypes and the idea is to convert the entire fleet of Mumbai local trains into AC locals in the future. “There are long-term plans to get new 238 Mumbai-customised AC local trains — 47 under MUTP-3 and 191 under MUTP-3A — having inbuilt infotainment, CCTV, with better acceleration. The trains will be procured by the MRVC,” he said.

Next Story : Measles outbreak in Mumbai: Parents to get a call day before kid’s vaccination