For the first time, contractors have been using a straddle carrier which will build the bridge between Dahisar and Mira Bhayander as it moves ahead 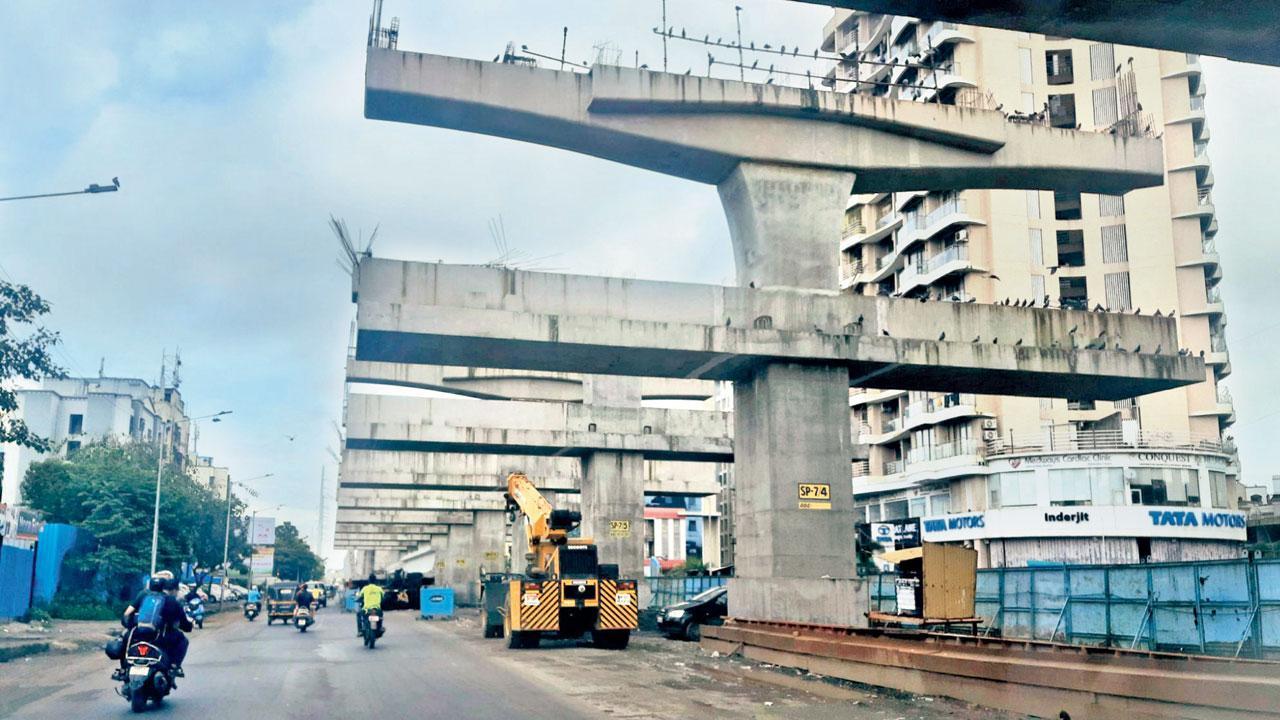 The flyover is being built along Mumbai Metro Line 9 route between Dahisar and Mira Bhayander. Pic/Sahil Pednekar


In what could be a first for the city, work on a two-deck flyover that will carry road traffic and the Metro line 1 below it, is taking shape along Mumbai Metro Line 9 route between Dahisar and Mira Bhayander. Also, for the first time, contractors have been using a straddle carrier which builds the bridge as it moves ahead. The 11.386-km-long line with 10 stations, is an extension of Mumbai Metro Red Line 7, which runs between Andheri and Dahisar, part of which has been operational since April 2022.

“This line will be unique because it will run on a double-decker bridge. There will be a flyover on the first deck and the Metro will run on the second deck. The flyover will start near the proposed Shivaji Chowk (Mira Road) Metro station and end in Bhayander (West) via Mira-Bhayander Road. It will provide interconnectivity between the Western Express Highway, the Western Railway and the Mumbai Metro (Line 2 and Line 7),” an official said.

“Between Kashigaon and Subhash Chandra Bose ground, there are three stretches of such double-decker viaducts on Kashimira Road, measuring 1.5 km, 1.1 km and 754 m for vehicles and metro trains,” he added. MMRDA has proposed the Rai and Murdhe area of Bhayander West for the construction of a maintenance depot for the entire Red line of Mumbai Metro (Line 9, Line 7 and Line 7A). But due to protests from some activists and local residents, MMRDA has been facing land acquisition challenges.

The project cost is Rs 6,607 crore, including state taxes and 7.5 per cent per annum escalation, and it will have eight-car standard gauge trains running. MMRDA Metropolitan Commissioner S V R Srinivas said, “The double decker bridge with the Metro and a road is on Line 9 and this is the first time in the MMR that we are doing this. The straddle carrier crane works at night and has also been deployed here for the first time. Efforts are on to expedite the work.”