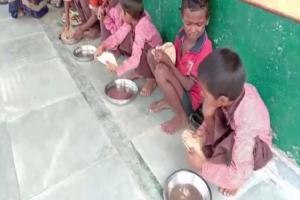 
Children at a primary school in Hinauta village in Mirzapur were handed chappatis for their lunch as part of the mid-day meal scheme on Thursday. What is shocking is that the children got only salt instead of vegetables or pulses along with milk and fruits, they should have been given!

After being intimated about it, district authorities called it "a serious lapse" and have initiated an inquiry into the incident at Siyur primary school in Hinauta village. A teacher has also been suspended.

Kajal, a student at the school told ANI, "I had salt with chappatis today in my lunch. Sometimes, we are given vegetables with chappatis but for today's meal we just got salt." Several other children at the school also claimed they had not received any milk too during the meal.

Mirzapur District Magistrate (DM) Anurag Patel blamed the teachers for the mismanagement."As per the orders by Chief Minister Yogi Adityanath the menu of mid-day meals across the districts is fixed. They are also given fruits and milk on some days. But these incidents happen due to the lapse of teachers and supervisory staff," Patel told ANI.

"We have suspended the teacher responsible and an investigation has been launched in the matter. It is true that today the students got just plain chappatis and are being forced to eat them with salt because of lack of vegetables. This is a serious lapse," he added.