In a picture, PM Modi was seen touching the feet of mother Heeraben. PM also had his evening tea sitting beside his mother 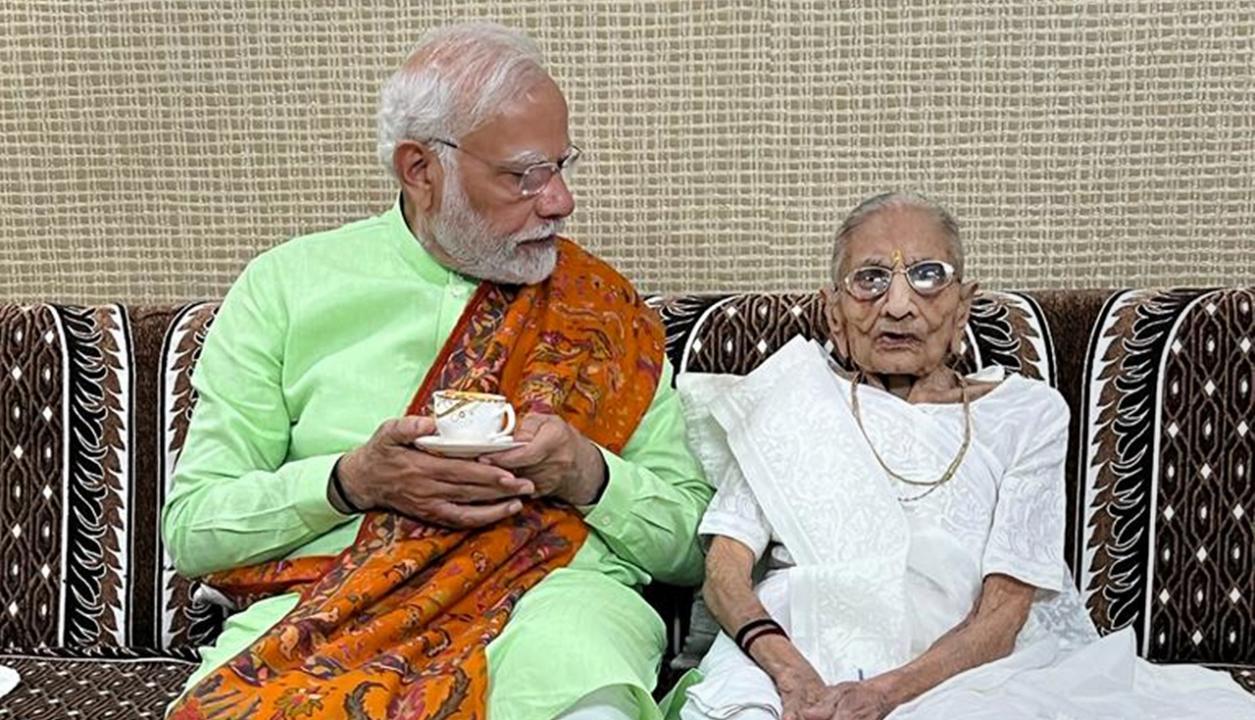 
Prime Minister Narendra Modi, who is on a visit to his native state Gujarat, met his mother Heeraben Modi at her residence in Gandhinagar on Sunday.

In a picture, PM Modi was seen touching the feet of mother Heeraben. PM also had his evening tea sitting beside his mother.

The last time Prime Minister Narendra Modi met his mother Heeraben was on June 18 on her 100th birthday.

Meanwhile, PM Modi will cast his vote in Ahmedabad on Monday in the second and final phase of the Gujarat Assembly polls.

On Saturday, PM said that the people of Gujarat want to continue with the development streak.

In a Twitter post, PM Modi said that he has received tremendous affection everywhere he travelled in Gujarat over the last few days.

"Over the last few days, I have travelled across the length and breadth of Gujarat. Wherever I went, I received tremendous affection. People have seen the development in the last two decades and want this trajectory to continue," PM Modi said.

Earlier on Thursday, Prime Minister Narendra Modi held a mega roadshow in Ahmedabad, which as per sources, was attended by more than 10 lakh people.

With attendance of over 10 lakh, it was Prime Minister's largest and longest roadshow in the country, as it spanned around 50 kilometres and passed through as many as 14 Vidhan Sabha seats-- 13 from
Ahmedabad and one in Gandhinagar.

After the high-voltage campaigning, the countdown has begun for the high-stakes political battle to conclude in Gujarat, with the final phase of polling for the ongoing Assembly elections to be held on Monday.

Polling in the second and final phase will be conducted for 93 Assembly constituencies across 14 districts of north and central Gujarat. As many as 833 candidates from 61 parties are in the fray in the second phase of the Gujarat elections whose fate will be decided by over 2.51 crore electorates.

Narendra Modi has been Gujarat's longest-serving chief minister from 2001 to 2014.

In the 2017 Gujarat polls, Bharatiya Janata Party's (BJP) tally stopped at 99 seats out of a total of 182 seats. The party has been in power for the last 27 years with Narendra Modi being the state's longest-serving chief minister.

During the first phase of polling on December 1, Gujarat saw an overall turnout of 63.14 per cent. The voting began at 8 am in 89 constituencies spread across 19 districts of Kutch, Saurashtra and South Gujarat regions.

The first phase of voting for 89 seats in Kutch, Saurashtra and South Gujarat ended on December 1, with an overall turnout of 63.31 per cent.

The results of the Gujarat Assembly polls will be announced on December 8.