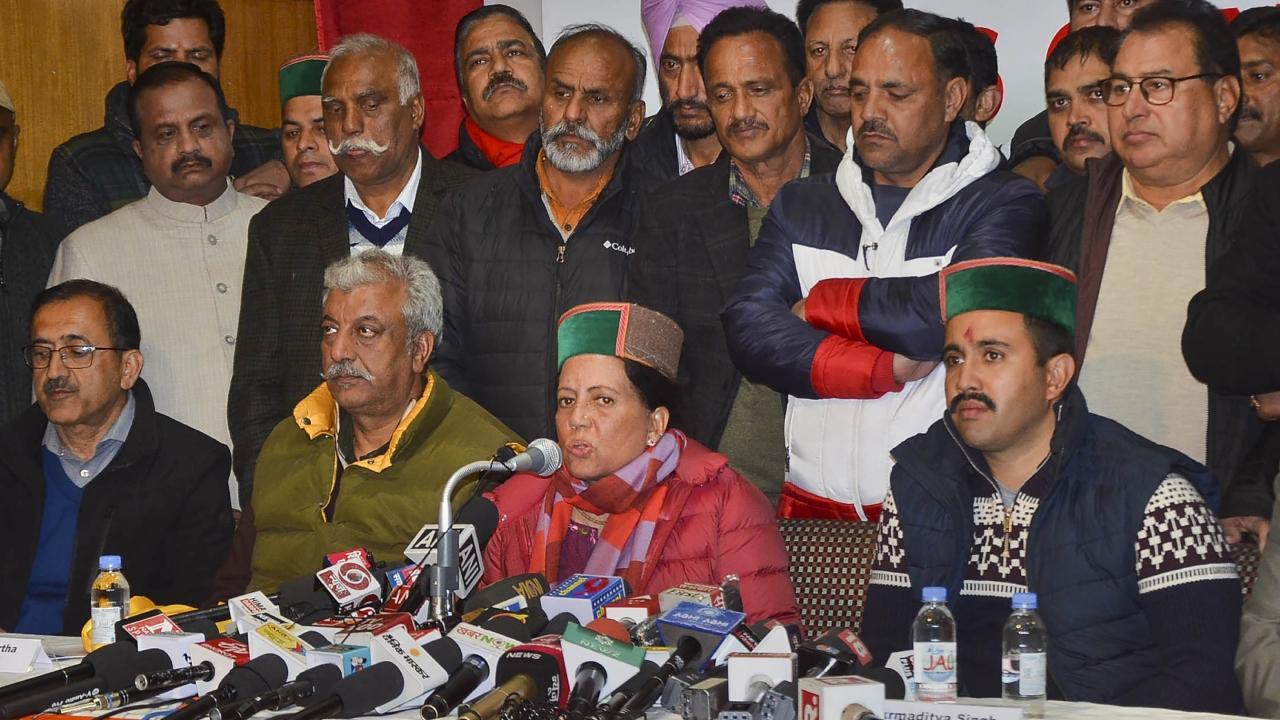 
A meeting of newly elected Congress MLAs to discuss the appointment of the next Himachal Pradesh chief minister began here on Friday evening amid a show of strength by aspirants to the post, a day after the party wrested power from the BJP.

Chief Minister hopefuls Pratibha Singh, Mukesh Agnihotri and Sukhwinder Singh Sukhu reached the party office for the Congress Legislature Party meeting along with their supporters, who raised slogans in their favour.

As the party's central observers -- Chhattisgarh Chief Minister Bhupesh Baghel and former CM of Haryana Bhupinder Singh Hooda -- worked to find a consensus candidate, a group of supporters of Pratibha Singh, the state party chief and the wife of former CM Virbhadra Singh, blocked their vehicle and raised slogans in her support.

The supporters raised slogans saying that the chief minister should be from the family of Virbhadra Singh.

It happened as the central observers, along with AICC in-charge for Himachal Pradesh Rajeev Shukla, were going to meet Governor Rajendra Vishwanath Arlekar.

The central leaders submitted a list of the party's winning MLAs to the governor and "sought time" to formally stake claim to form the government.

The Congress Legislature Party meeting was scheduled to begin at 3 pm but was delayed as several MLAs could not reach Shimla from far-away places earlier. The MLAs are expected to pass a resolution authorising the Congress chief to pick the legislature party leader who will be the next chief minister.

Speaking to mediapersons ahead of the CLP meeting, Congress leader Sukhu said, "I am not a chief minister aspirant. I am just a Congress worker and whatever decision the high command would take would be accepted."

The Congress wrested power from the BJP in the hill state winning 40 of the 68 assembly seats. The polling was held on November 12 and the results were declared Thursday.

Earlier in the day, Pratibha Singh, 66, has indicated that she is in the running for the chief minister's post, a point also made by her son.

"I am not in the race for the top post but my mother is one of the contenders for the post of chief minister," her son and Congress MLA from Shimla Rural Vikramaditya Singh told PTI.

"A meeting of all winning MLAs has been convened and the final decision would be taken by the high command which would be acceptable to all," he added.

Vikramaditya Singh told reporters here that "collective will of MLAs will be kept in mind and then observers will convey the same to the high command".
Replying to a question, Singh said, "Whatever the high command decides will be acceptable to all of us."

"Post is not important for us. What is important is the promises we made to people. We have to fulfil them and we are committed to that," he said.

He said the government will be formed in two-three days.

Former state chief of the party Sukhu and outgoing legislature party leader Mukesh Agnihotri are also believed to among the frontrunners for the chief minister's post.

Senior Haryana Congress leader Karan Singh Dalal, who was part of the Congress delegation which met the governor, told PTI that they gave the list and told him,

"We have come to seek your time to present our credentials to form government in the state. The party has won the assembly polls with a majority."

The Congress observers and Shukla also met Pratibha Singh at a hotel.

Shukla had on Thursday said the Congress was happy that it is getting an opportunity to form the government in the state and asserted that the party will do everything to fulfil the 10 guarantees made to the people of the state and would provide better governance to people.

"The newly elected Congress MLAs would meet in Shimla on Friday post-election results and decide on electing the new legislature party leader," Shukla had told PTI on Thursday.

Sources said the MLAs are likely to pass a one-line resolution authorising Congress president Mallikarjun Kharge to decide the CLP leader. This has been the tradition in the Congress party, they said.