The UAE voiced its condemnation of the remarks, saying they were 'contrary to moral and humanitarian values and principles' 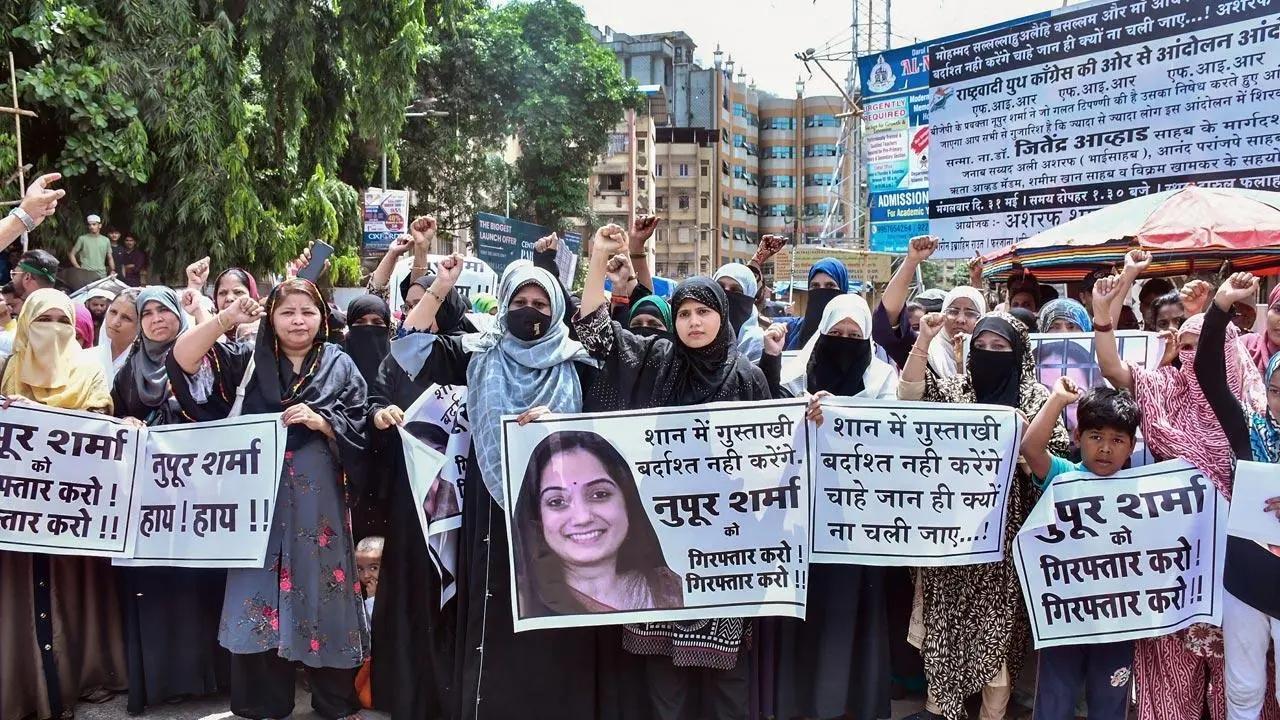 Women from the Muslim community shout slogans during their protest against BJP spokesperson Nupur Sharma over her alleged remarks on Prophet Mohammad, in Thane. Pic/PTI


The United Arab Emirates, Bahrain, Jordan, Indonesia and Maldives have become the latest countries to join Kuwait, Qatar and Iran to condemn the remarks made against the Prophet by two BJP leaders. The UAE voiced its condemnation of the remarks, saying they were "contrary to moral and humanitarian values and principles."

For their remarks, the ruling party suspended its spokesperson Nupur Sharma and expelled its BJP's Delhi media head Naveen Jindal on Sunday.

On Sunday, Saudi Arabia, Qatar and other countries in the Gulf region, as well as the Al-Azhar University in Cairo, condemned the comments by the two leaders and summoned Indian ambassadors.

Saudi Arabia described Sharma's comments as "insulting" and called for "respect for beliefs and religions", according to a foreign ministry statement.

Qatar had also demanded India to apologise for the "Islamophobic" comments, as India's Vice President Venkaiah Naidu visited the Gulf state on June 4. Indian envoy Deepak Mittal was handed an official protest letter, which stated, "Qatar is expecting a public apology and immediate condemnation of these remarks from the government of India," on Sunday, June 5.

"Allowing such Islamophobic remarks to continue without punishment constitutes a grave danger to the protection of human rights" and "will create a cycle of violence and hate", it added.

While on Sunday, Kuwait too summoned India's ambassador, a supermarket in Kuwait City covered sacks of rice and shelves of spices and chilies with plastic sheets with signs in Arabic reading, 'We have removed Indian products'.

BJP suspended Sharma on Sunday for expressing "views contrary to the party’s position". Sharma said on Twitter that her comments had been in response to "insults" made against the Hindu god Shiva. "If my words have caused discomfort or hurt religious feelings of anyone whatsoever, I hereby unconditionally withdraw my statement," she said.

The Indian embassy in Qatar issued a statement on Sunday, saying the 'offensive tweets' by individuals in India 'do not, in any manner, reflect the views of the government of India', adding 'these are the views of fringe elements'.

Next Story : ‘Modiji, what you permit is what you promote’