Drunk man stands in middle of road to test wife's love; gets hit by van

The incident took place on the streets of Lishui in Zhejiang Province, China. The entire scene went on for 40 minutes 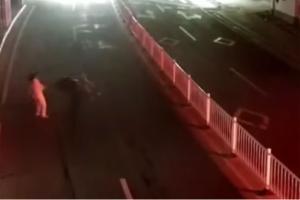 
If you thought that such things happen only in Bollywood, this Chinese man proves it all wrong. A Chinese man stood in the middle of the road to test his wife's love and see if she pulls him back. Instead, what happened was that a speeding van hit him. The incident took place on the streets of Lishui in Zhejiang Province, China. The entire scene went on for 40 minutes.

The husband's surname is Pan while the wife's surname is Zhou. In the video, the couple is seen having an argument. While the drunk husband kept standing in the middle of the road, his wife tried pulling him back repeatedly but to no avail. His wife then runs to check onto him and calls an ambulance.

According to the local police, Pan was lucky to survive but he suffered serious head injuries and multiple chest fractures.

India Today quoted Pan saying, "My wife and I were arguing, so I went out for a few drinks. On the way back I called her and we started fighting again."

He added, "I wanted to see if she would try and stop me. I wanted to know whether she really loved me and if she would pull me back. But then I got hit by a car and now I'm injured."

Pan also confirmed that he regretted doing what he did.

Also read: Woman wears crop top on flight; airline tells her 'cover up' or get off