The nearly 100-metre-high illegally-built Apex (32 floors) and Ceyane (29 floors) towers -- were razed to the ground using hi-tech engineering techniques. Over 3,700 kg of explosives were used to bring down the structures 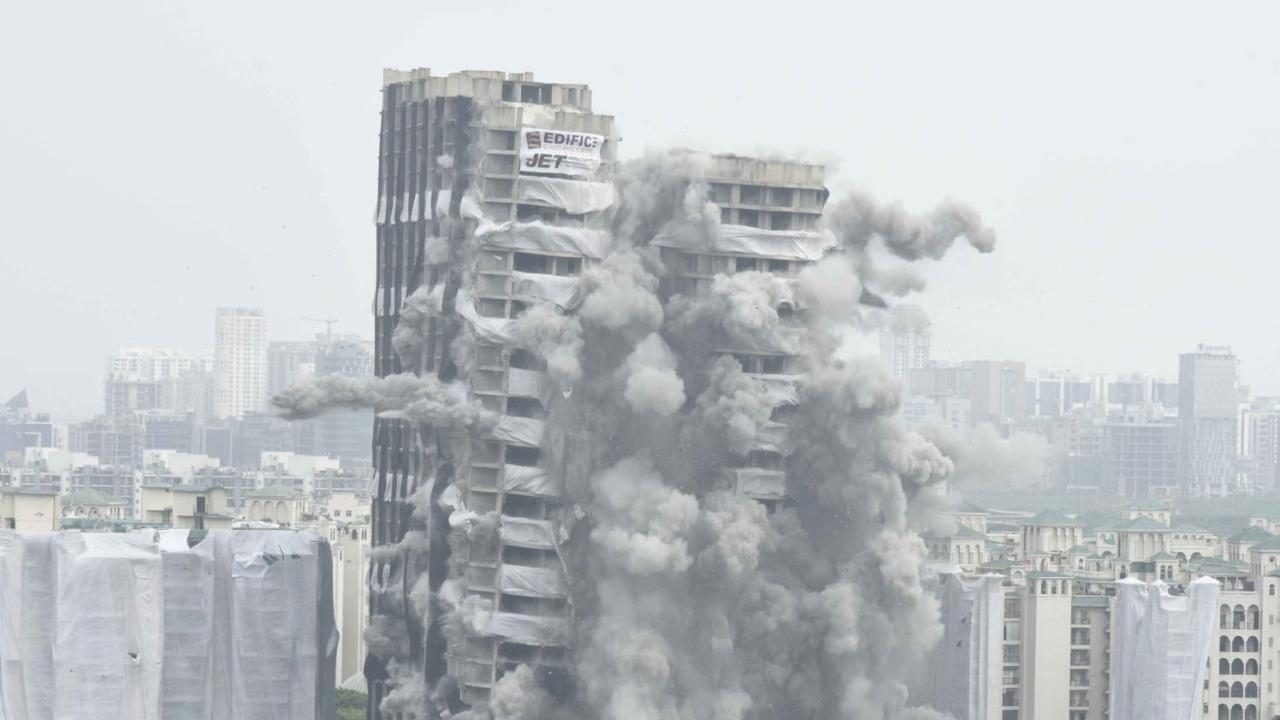 
As Supertech's twin towers in Noida were reduced to rubble in a matter of seconds on Sunday, producing an ominous cloud of smoke, Twitter also exploded with amusing comments, hilarious memes and dark humour.

While some users tweeted that the "Tower of Corruption" was grounded, a few others said the media's ground coverage of the unprecedented event was "as if ISRO is sending Gaganyaan to moon".

The nearly 100-metre-high illegally-built Apex (32 floors) and Ceyane (29 floors) towers -- were razed to the ground using hi-tech engineering techniques. Over 3,700 kg of explosives were used to bring down the structures.

People across the country were glued to their TV sets since afternoon to watch the mega demolition event and a little past 2:30 PM, the twin towers literally became history, becoming the tallest structures to be demolished in India.

Also Read: IN PHOTOS: Noida twin towers come crashing down after use of 3,700 kg explosives

Twitterati responded to the demolition with a range of feelings -- mirth, amusement, humour, sarcasm, while some even asked if it was really necessary to carry out the demolition and could it not have been reused for a humanitarian or other public welfare purposes.

#NoidaTwinTowers #SupertechTwinTowers #Supertech @indiatvnews," wrote user @ShivamG2711 and shared a clip of visuals of demolition playing on a TV set.
Hundreds of cameras were placed at various vantage points in the nearby areas, including those brought by crew members of a large number of media houses.

The giant ball of smoke that was raised after the demolition left many people witnessing it on the ground and on TV sets in awe, as the billowing smoke filled the skyline and the screen.

On the ground, many people stood at a safe distance to "enjoy the sight of demolition" withe balloon-sellers and street vendors, selling food stuff, adding a layer of festivity to the environment with some even termed it as a "Supertech Sunday".

The towers which dominated the Noida skyline, stood taller than Delhi's iconic Qutub Minar (73 m) before being consigned to history. They were under construction since 2009 within the Supertech Emerald Court housing society in Sector 93A of Noida, adjoining the Delhi, and were demolished on the order of the Supreme Court.

Another user @A_Parolia tweeted just before the exercise was carried out: "D-Day for these towers who I call Yin & Yang. They are symbol of corruption between the builders & the authorities; but also for the fight, victory & justice for the #homebuyers . May this be a lesson for all, Satyamev Jayate. @jagograhakjago #Demolition #TwinTowers #Supertech".

Some Noida residents even live streamed it on social media from the balconies. User @akashrai_3575 wrote: "Twin tower History Now! #TwinTowers," while streaming it on Twitter.

But, the mega demolition also spawned a flurry of memes, with many Twitter users using famous dialogues and stills from Bollywood films like 'Gangs of Wasseypur' to add to the 'demolition humour'. "At 2:30 people Le Noida people," wrote a user and shared a clip from a comedy sketch.

Another Twitter user shared a meme with a caption "Noida people right now" and a still from movie 'PK', showing the main character played by Aamir Khan, with his face smeared in dust.

One meme even talked of what may have been going in the minds of the engineers: "Engineers before explosion of #TwinTowers and a punchline 'Bharosa rakhiye purane khiladi hain'.

Using humour-laced tweets, many even poked fun at the massive coverage of the event by the media.

"Noida Twin Tower demolition resembling the fall of Indian Media standards in last one decade! #TwinTowers," said another user @VishalVerma_9.
With an India vs Pakistan match lined up on Sunday, user @AnasShaikhFzd shared a meme, saying, the excitement level for "#TwinTowers >>>>#TwinTowers" was much higher than for the match.

#Supertech twin towers worth around Rs 1000 cr will be demolished tomorrow using another Rs 20 cr. What a waste of resources! Let's not even talk about the environmental hazards! Wish the whole mess was handled in a better manner!
#NoidaTowerDemolition," user @_PreScribbles earlier wrote.

The demolition of the twin structures generated an estimated 80,000 tonnes of construction and demolition waste and sent huge clouds of dust billowing in the air.

Me after doing nothing on a Sunday but just watching twin towers fall on every other News channel.#TwinTowers #TwintowersDemolition #MEMES #sundayvibes #SupertechTwinTowers pic.twitter.com/P5MfYSy25s

This Ganesh Chaturthi will you be making your own clay Ganesha idol at home ?

Next Story : Computer science graduate opts farming in UP village; cashing in on dragon fruit cultivation