Short skirts are a problem 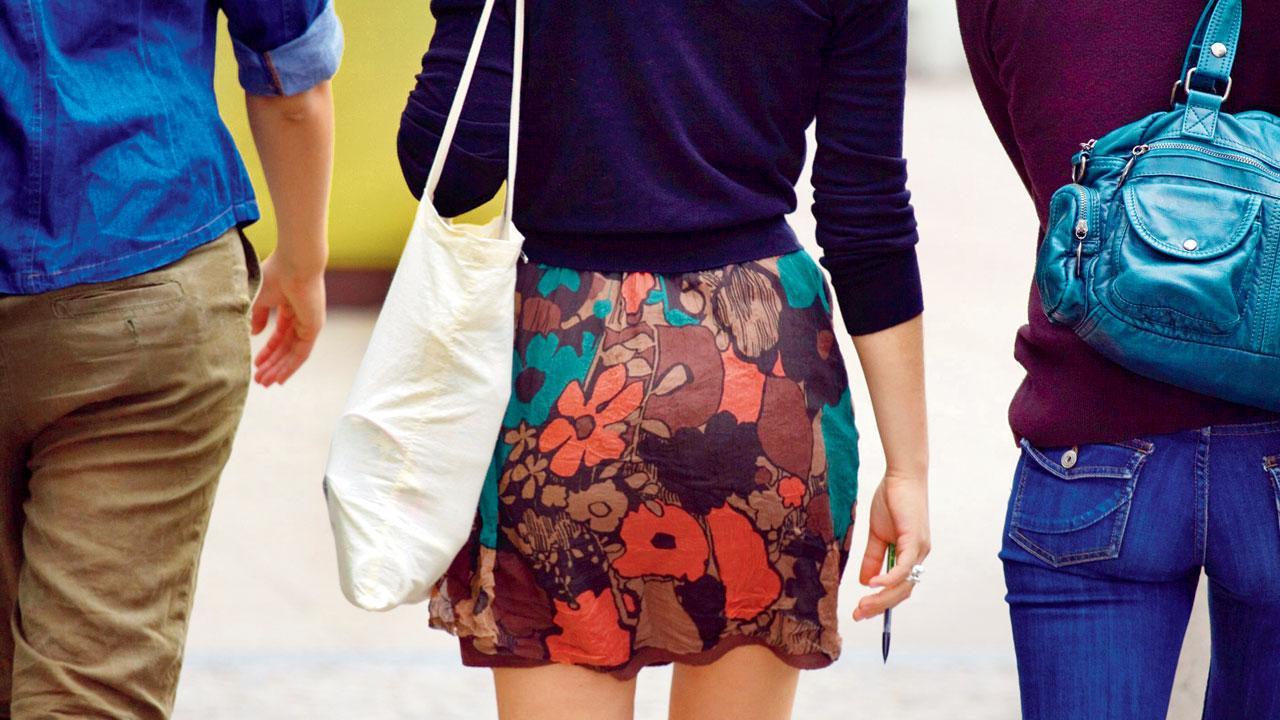 A society without short skirts and tight tops is one where men aren’t tempted to commit crimes. It is a progressive society, not a backward one. Representation pic

I am a former student of St Xavier’s College; I know what short skirts can do. It’s why I was very pleased to see that my alma mater has decided to implement what it once did in the 1990s and put a stop to inappropriate and indecent clothing on campus. It hasn’t specified what inappropriate or indecent means, but I’m pretty sure it’s a reference to skin, because that’s where everyone starts to have a problem. After all, history is rife with examples of how society starts to crumble whenever the skin of anyone female is revealed.

Several principals spoke to this newspaper a couple of weeks ago, explaining why a dress code needed to exist. One mentioned the problem of hairstyles too, which made perfect sense to me because I have lost count of how distracting a woman’s hair can be. I could probably have scored higher marks in college if my female classmates were to tuck their hair beneath a covering of some kind. I have also lost count of the number of times the glimpse of a calf or ankle in college distracted me from my studies and made it impossible for me to get through the day. Unfortunately, at the time, there was no one to police what my female classmates wore, and all male students had to pay the price.

A neighbouring college has also prohibited short skirts, revealing tops, or clothes that are explicitly tight, presumably because tight clothing highlights the presence of a human body beneath a cotton or polyester layer. I think this is a great idea too, because it forces women to focus on education alone, while simultaneously allowing their male classmates to do the same.

In an ideal world, all our colleges would have some sort of uniform for women, making it impossible for them to tempt or distract any men they come into contact with. I would go so far as to restrict female students to pre-assigned areas of these educational institutions. Yes, women-only colleges do exist, but they have dress codes too, presumably because female students distract male professors in the absence of male classmates.

It’s important for colleges to spend more time examining what students are wearing, because it is a sign of where their priorities lie. Cynics may attack these policies as regressive, pointing out that we are in the year 2022, not 1922, but they miss the point. It is only when women learn how to dress in an appropriate manner that men will be able to function, allowing the academic community to then turn its attention to what is being taught and how it should be taught.

Some say that students attending colleges are adults and should therefore be able to decide what they wear because clothing is a statement that reflects one’s personality. This is precisely why more colleges should impose restrictions on what female students can and cannot wear, as this will go a long way towards preparing women for life in society outside any campus. It will also prepare them for careers in corporate India, so they won’t get into it with unreasonable expectations about being allowed to make choices for themselves.

Rape is supposedly the fourth most common crime in our country, with 4,49,092 cases reported between 2001 and 2018. This is clearly a sign that women need to be controlled, and there is no better place to start than with what they choose to wear in public. A society without short skirts and tight tops is one where men aren’t tempted to commit crimes. It is a progressive society, not a backward one. If we don’t take dress codes seriously, India may end up like the West, where women can wear anything they want to. Down that path lies anarchy.

I am glad we have college principals who are so invested in what women wear. A decade or so ago, one of them banned T-shirts and jeans too. I expected crimes against women to drop drastically after that happened and was surprised when that didn’t occur.

It’s hard to pinpoint why Indian women don’t feel safe in public anymore. India ranks 148 out of 170 countries on the Women, Peace and Security Index 2021-22. Some may take this to be a sign that Indian men have a problem, which is impossible because everyone knows Indian men behave badly only when tempted by women. So, obviously, what women wear is the real problem. Thank god for our enlightened college principals.

Next Story : Natasha aka Nats aka Darlings