On a day on which rain chose not to interrupt play, England made merry as Root and Bairstow went back to the dressing room after making 76 off 110 balls and 73 off 89 deliveries respectively 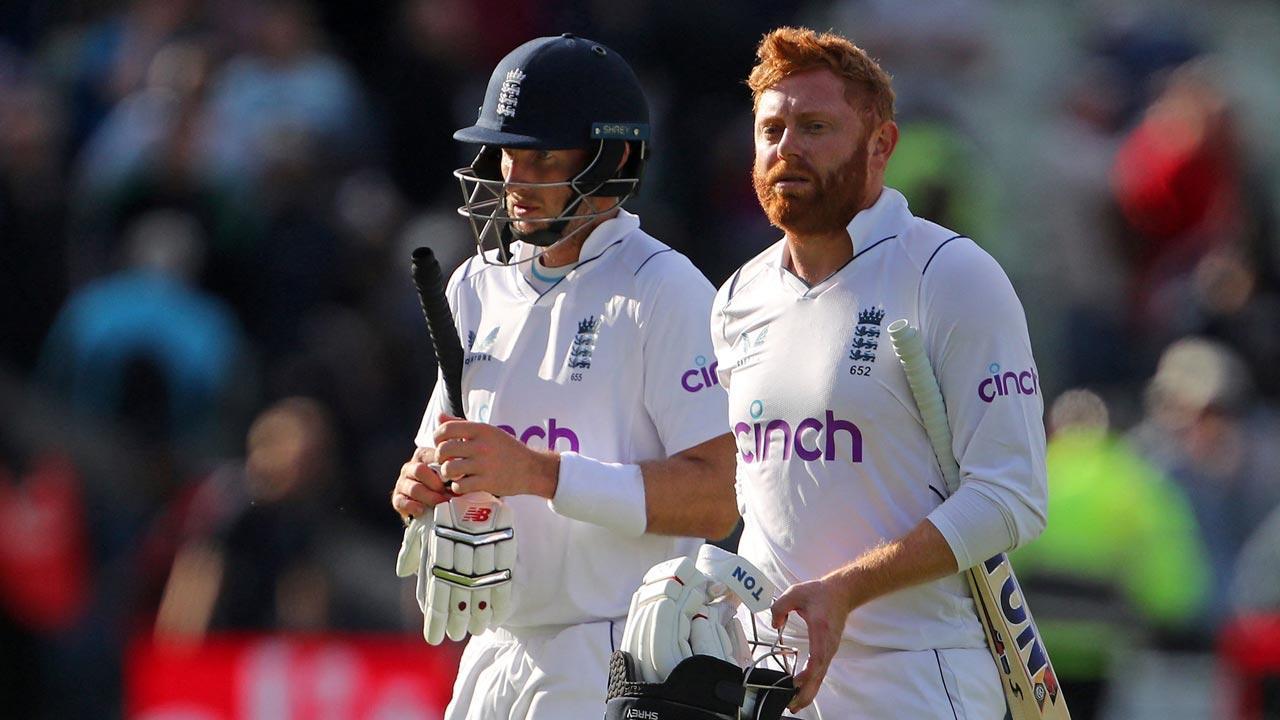 England's Joe Root (L) and England's Jonny Bairstow walk back to the pavilion at the end of play on Day 4 of the fifth cricket Test match between England and India at Edgbaston, Birmingham in central England. Pic/AFP


Joe Root and Jonny Bairstow slammed unbeaten fifties to lead England's mammoth chase of 378 against India on day four of rescheduled fifth Test at Edgbaston on Monday. At stumps, the hosts were 259/3 in 57 overs, needing just 119 on a sold-out final day to level the five-match series being played for the Pataudi Trophy.

On a day on which rain chose not to interrupt play, England made merry as Root and Bairstow went back to the dressing room after making 76 off 110 balls and 73 off 89 deliveries respectively. Before this, on a pitch that had variable bounce and some turn for spinners, England took out the last seven Indian wickets for 120 runs, with Ben Stokes adding three more scalps, to bowl the visitors out for 245 in 81.5 overs.

Then, the effect of the heavy roller on the pitch was apparent by the terrific opening stand of 107 between Alex Lees (56) and Zak Crawley (46), before a ball change after 20.5 overs fetched India three wickets in as many overs. But Root and Bairstow's unconquered stand of 150 meant the day belonged to the hosts.

India struck on the very first ball after tea as Bumrah enticed Ollie Pope to poke at a back-of-the-length ball coming in, which the batter did. But the ball held its line and took Pope's outer edge behind to Pant, departing without troubling the scorers.

Bairstow got off the mark with a boundary through back-foot punch off Jadeja while Root survived lbw appeals off Jadeja and Shami as India lost two reviews in as many overs. The shift in gears came from the 37th over when Root reverse-swept and paddled Jadeja for a brace of boundaries.

Bairstow had a life at 14 when an outside edge off his blade burst through Hanuma Vihari's hands at the second slip, with the ball flying towards the boundary rope. That set the tone for the counterattack from the duo - Root bringing the sweep and whips to reach his half-century in 71 balls.

Bairstow, on the other hand, found the gaps for boundaries through flicks, pulls and slices to reach his fifty with a brace through his square leg. He got another life at 39 when a faint edge on the flick didn't stick into the gloves of a diving Pant.

After reaching his fifty, Bairstow carved Shami through backward point for a boundary before playing a fierce hook off Siraj for a six over fine leg to keep England in the hunt of chasing their highest successful score in Test cricket.

Earlier, Rishabh Pant followed up his 146 in the first innings with 57 while Cheteshwar Pujara notched up 66 in India's second innings score of 245. Pujara added 16 more to his overnight total of 50 before cutting straight to the backward point in Stuart Broad's first over.

A controlled Pant reached his fifty with a delicate flick through the fine leg, becoming just the second Indian wicketkeeper after Farokh Engineer to get a century and fifty in the same Test. Shreyas Iyer, after hitting three boundaries, fell to the short ball again in the match, pulling straight to mid-wicket off Potts.

Pant welcomed Jack Leach with a reverse sweep behind fine leg for a boundary despite falling on the ground. He tried to unsettle Leach's line and length with another reverse sweep, but could only glove behind to first slip, finishing the match with 203 runs across both innings.

Potts rattled Shardul Thakur with short balls, even striking him on side of the helmet once. In his next over, Thakur tried to take on the short ball with a pull but the top-edge flew to deep fine leg. Stokes then bounced out Shami before getting one to jag in sharply and force Jadeja to chop onto his stumps. He ended India's innings by having Bumrah hole out to fine leg immediately after being hit for a six.

In the pursuit of 378, Lees and Crawley hit two boundaries each to take England to 43 runs in eight overs. India's introduction of Jadeja had little effect on England as Lees danced down the pitch to drive through mid-off before nailing the gap through point to make it two boundaries off his opening over.

Lees continued to be eye-catchy in his stroke play, reaching his fifty in just 44 balls with a copybook style back-foot punch through cover-point off Siraj. Crawley, who survived a caught behind appeal off Jadeja, brought out some exquisite drives, flicks and started to find gaps crisply for fun. The left-right duo brought up England's century in 19.5 overs, marking the first-century stand between the duo.

For India, who got to change the ball after 20.5 overs, Bumrah brought himself on in the 22nd over and got success on the fourth ball as Crawley's off-stump was castled, with the batter offering no shot to an in-ducker, providing India a vital breakthrough an over before tea.

Post tea, India would find two more wickets before Root and Bairstow joined forces to bring England on the path of their fourth straight successful chase in as many Tests.

Next Story : Mohammed Siraj: We kept our patience as Jonny Bairstow was attacking