With this victory, South Africa has a 1-0 lead in the series. Kagiso Rabada (7/79 in the match) and Anrich Nortje (6/110 in match) ensured that England's batting line-up could not unleash its much-hyped 'Bazball' brand of cricket 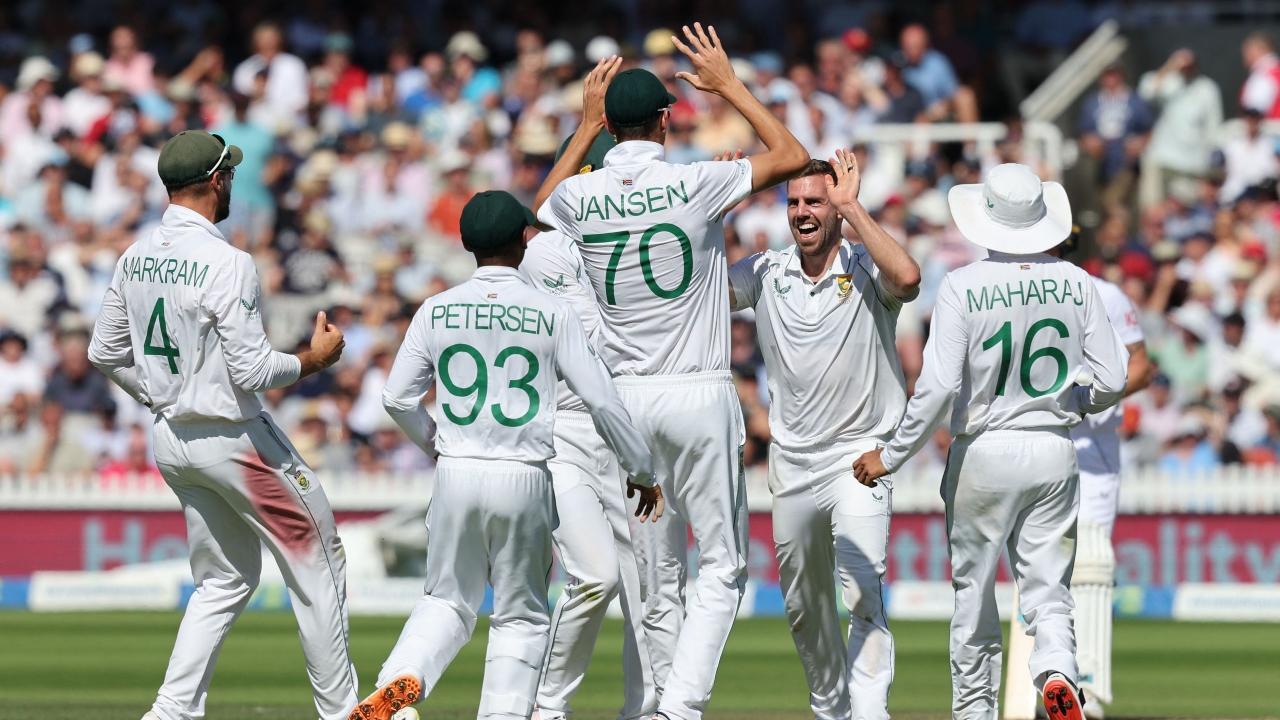 Anrich Nortje celebrates with teammates after taking the wicket of Ben Foakes during play on day 3 of the first Test match between England and South Africa. Pic/ AFP


World-class performances by the South African bowlers led by Kagiso Rabada and Anrich Nortje coupled with a half-century from Sarel Erwee helped the Proteas down hosts England by an innings and 12 runs within just three days in the first Test of the three-match series at Lord's on Friday.

With this victory, South Africa has a 1-0 lead in the series. Kagiso Rabada (7/79 in the match) and Anrich Nortje (6/110 in match) ensured that England's batting line-up could not unleash its much-hyped 'Bazball' brand of cricket.

For South Africa, Erwee (73), captain Dean Elgar (47) and pacer Marco Jansen (48) starred with the bat, taking the side to 326/10 in their first innings and giving them a healthy 161-run lead after England were bundled out for 165 in first innings.

England could not gain a lead and were bundled out for just 149 runs in their second innings, losing the game by an innings and 12 runs.

South Africa started off the third day at 289/7 in 77 overs, with Marco Jansen 41* and Rabada 3* unbeaten. Pacer Matty Potts delivered England an early wicket just three balls into the third day, sending back Rabada after he was caught by Stuart Broad.

Then, Anrich Nortje and Jansen put on a 29-run stand which helped Proteas cross the 300-run mark comfortably. Jansen was the next one to get dismissed for a solid 48 by Broad after being caught by Zak Crawley in slips.

Broad quickly dismissed Lungi Ngidi for a duck, bundling out SA for 326. Broad (3/71) and Ben Stokes (3/71) were the leading bowlers for England. Matty Potts took two while James Anderson and Jack Leach took a wicket each. SA had a 161-run lead in their hands and England batters had to deliver this time around to have a chance in the match.

England did not have a good start as strikes from spinner Keshav Maharaj dismissed Zak Crawley (13) and Ollie Pope. The hosts were at 38/2.

Opener Alex Lees was the only one putting some resistance and kept the scoreboard ticking. Joe Root (6) fell early, leaving England at 57/3 after Ngidi struck for Proteas.

Bairstow and Lees tried to rebuild the innings for England, but Nortje broke their 24-run stand, and dismissed them quickly for 18 and 35 respectively.

Half of the England team was back in the pavilion for 86 runs. Ben Foakes also fell for cheap to Nortje, with England tottering at 86/6.

Then captain Ben Stokes and Stuart Broad put on a stand of 55-runs which kept England's hopes of at least gaining a lead alive.

Broad was dismissed for 35 by Rabada while Jansen quickly removed Matty Potts for just one by dislodging his stumps. England was struggling at 146/8, with Stokes their only hope. However, the skipper was also dismissed for 20 by Rabada.

South Africa was one wicket away from the win, which Jansen provided to his side by shattering James Anderson's stumps. England were bundled out for 149 and lost the match by an innings and 12 runs. Nortje (3/47) was the leading bowler for Proteas.

Rabada, Maharaj and Jansen took two wickets each. Ngidi got one wicket.

Put to bat first by SA, England was bundled out for 165 runs in their first innings. Only Ollie Pope (73) and Ben Stokes (20) could put up some decent performances for England. Pacers Rabada (5/52) and Nortje (3/63) delivered superbly for South Africans. Jansen also took two wickets.

Kagiso Rabada was named as Man of the Match for his brilliant 5/52 in the first innings and overall figures of 7/79 in the match.