I was completely blown away by Suryakumar Yadav's knock: Virat Kohli

Kohli credited Yadav, who hit a 26-ball 68*, for changing the complexion of the game on a pitch where most other batsman were struggling to score quickly 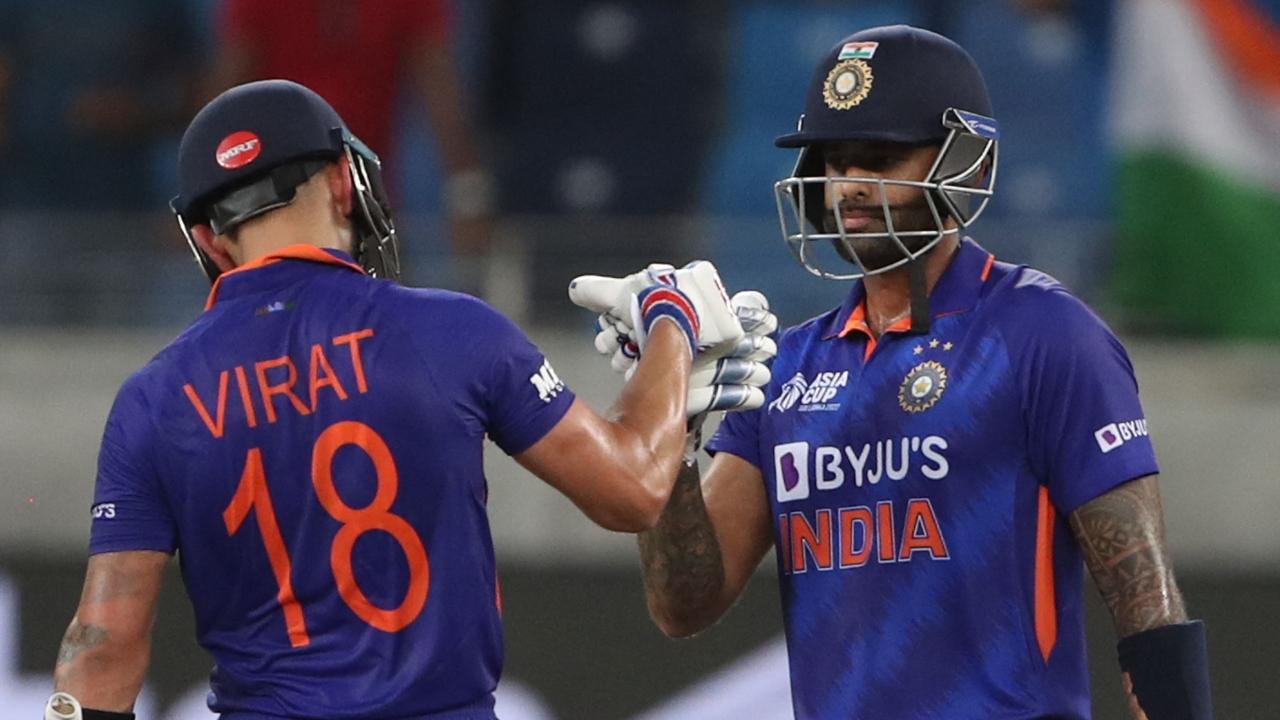 Virat Kohli congratulates his teammae Suryakumar Yadav after his half-century during the Asia Cup match between India and Hong Kong. Pic/ AFP


Talismanic India batter Virat Kohli admitted that he was completely blown away by Suryakumar Yadav's knock of an unbeaten 68 off just 26 balls, crediting him for completely changing the complexion of the game on a pitch which wasn't as easy to play as he made it look.

Suryakumar shared a 98-run stand off just 42 balls with Virat Kohli, who made 59 in 44 balls, hitting four and three sixes in his 31st T20I fifty and brought out some shots in the end as India fetched 78 runs in the last five overs to score a daunting 192-2 against Hong Kong.

"Sky (Suryakumar) played an outstanding knock, a knock that I enjoyed thoroughly from the other end on a pitch which wasn't as easy as he made it look, to be honest. It was a brilliant knock to watch from the other end. I've seen so many innings from a distance when we play in the IPL (against each other), or that being done to a lot of other teams."

"But this was my first experience of watching it very closely. I was completely blown away. I honestly believe that the way you played today (on Wednesday), if you can stay in that zone, you can literally change the complexion of the game against any team in the world," said Kohli in conversation with Suryakumar in a video on bcci.tv.

Suryakumar walked in when India were 94/2 in 13 overs, when KL Rahul was dismissed for 36 off 39 balls and brought out his drives, slashes, scoops and sweeps apart from audacious wrist play, sending the ball all over the park to get his fifty in 22 balls. He remained unbeaten on 68 off 26 balls, hitting six fours and as many sixes, which fetched him 60 runs coming at a strike-rate of 261.53.

"Firstly, I love batting with him (Kohli). When I was sitting inside, me and Rishabh (Pant) were speaking about how we could take game this ahead as the wicket was a little slow. When I went into bat, I tried to just be myself and do what I love doing. It was a really simple plan: taking the first 10 balls, I wanted to hit three-four boundaries in that time and when I got that, I just kept batting."

"At that moment, I knew I needed you there. That's why I told you that you just bat from one end, it'll be easy to cover up because I've seen you a lot of times later on, when you take 30-35 balls, the next 10 balls you bat with a strike rate of 200-250. It was important for me that you stay there so that I bat freely until the 20th over. And the same thing happened. I really enjoyed it," said Suryakumar about his knock.

Kohli had returned to international cricket after a break of a month and half, against Pakistan in what was his 100th T20I match on Sunday. He showed glimpses of his best self while making 35 off 34 balls.

Despite his unbeaten 59 against Hong Kong far from his fluent days, Kohli was able to accelerate at the end after being 15 off 18 balls at the start. He made 41 runs off 30 balls of facing spin, something which has been one of his weaker suits of late.

Play Quiz: What do you know about tennis superstar Serena Williams?

"My plan was very simple, like in the last game. I've come off a decent break, month and a half. Six weeks is a long time, especially at the international level when you get out of touch with the game, but I came mentally fresh. So I really enjoyed my batting in the last game as well, against a quality attack. I kind of got the pace of the wicket, but I knew my job was to stabilise the innings and build a partnership with whoever I play with. And in between when the situation allows me to, take a risk and hit a boundary every now and then."

"But again, when you (Suryakumar) came in, I told you I'm going to keep going but the moment you started and gave me a clear indication of how you're feeling, my role immediately changed back to holding one end. As you said, you could go out and express yourself almost every ball. That is something I enjoy doing, staying in there even if I am set, so that even if God forbid you didn't get those runs, then I could take charge, or we have Rishabh (Pant) or in another game Hardik (Pandya), Dinesh (Karthik) or (Ravindra Jadeja) Jaddu to come in."

"It was just applying whatever knowledge I have accumulated over the years for the benefit of the team. It was nice to get a couple of games where I felt good with my batting. For me, milestones and number of runs are irrelevant, it's how you feel when you bat, and I felt very good," concluded Kohli.

With wins in both their matches against Pakistan and Hong Kong, India became the first team from Group A to qualify for the Super Four stage of 2022 Asia Cup. They now await the winner of final Group A match between Hong Kong and Pakistan on Friday to see who they face off against on Sunday.