Rohit Sharma: We must get our act right

After beating South Africa by 16 runs in a highly intense T20I, India skipper Rohit Sharma admits his team need to get their act together in the last few overs on both, bowling and batting fronts 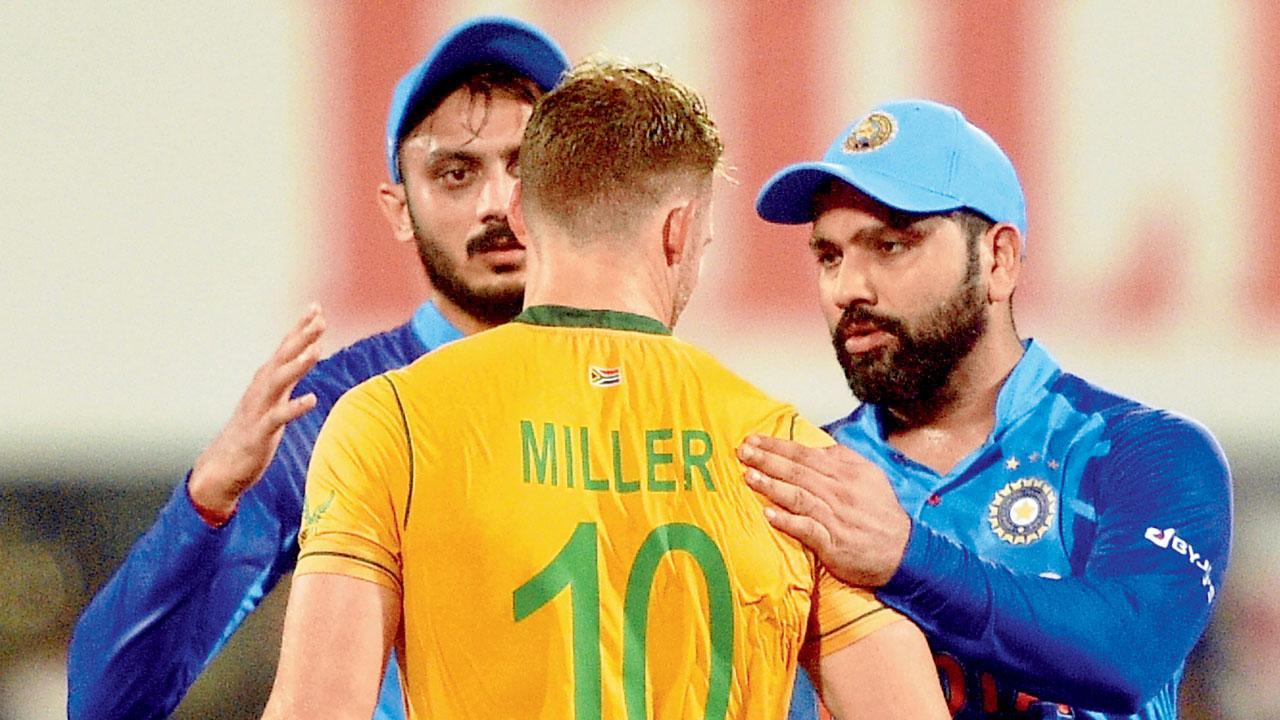 South African batsman David Miller is congratulated by India captain Rohit Sharma and left-arm spinner Axar Patel after scoring an unbeaten 106 during the second T20I in Guwahati on Sunday. Pic/PTI


Rohit Sharma admitted that T20 contests are pretty much settled during the death overs and the India skipper wants better execution of plans from his team mates although he is not overly worried about his team’s consistent struggles at that crucial stage of the match.

Invited to bat, India posted a mammoth 237 for three in the second T20 on Sunday but the Proteas took the game deep before eventually falling short by 16 runs as the hosts claimed their first series-win over South African at home.

“The team wants to play and bowl in a certain way and we want to give them that confidence. Yes, we have not bowled well at the death in the last five or six games. We are doing the same to the opposition as well,” Rohit said during the post-match presentation ceremony in Guwahati.

Tough job at the death

“To bowl and bat at the death is very tough. That is where the game is decided. It is not concerning, but we need to pick ourselves and get our act together.”

India’s top four batters once again came up with splendid efforts and Rohit said they would look to continue their ultra-aggressive approach.

“It is something that all of came together and said was what we wanted to do as a team. It might not come across at times, but we want to stick to it,” he said.

“What I have seen in the last 8-10 months is individuals putting their hand up and getting the job done for the team. Guys without too much experience did this as well.”

It may be an inconsequential game on paper at Indore today, but Indian bowlers await another tough test against South Africa ahead of the T20 World Cup when the two teams meet in the final game of the three-match series.

Having sealed their first-ever series against South Africa at home, Indian team management has decided to rest its premier batter Virat Kohli and vice-captain KL Rahul for the final game.

A disappointed South Africa captain Temba Bavuma put the blame on his bowlers. “It wasn’t our best performance, the conditions were different. We couldn’t execute our plans. Late with the bat, I thought we could have given it a good go with 220 but 240 was too high,” he said.

For South Africa, David Miller yet again put on display his big-hitting prowess with a 47-ball 106 not out, studded with eight fours and seven sixes.

“Miller was looking good, lot of confidence to be taken from his performance. The conditions were tough, we tried to get it swinging the ball early. But when it reduced, we saw how easy it was,” the SA skipper said.

Next Story : Suresh Raina: India, SL will fight for fourth spot in semis