With only three competitive games played in the 2022-2023 German football season, the attacking mid not only scored four goals but grabbed the record for the youngest German player in the league's history to score 14 goals 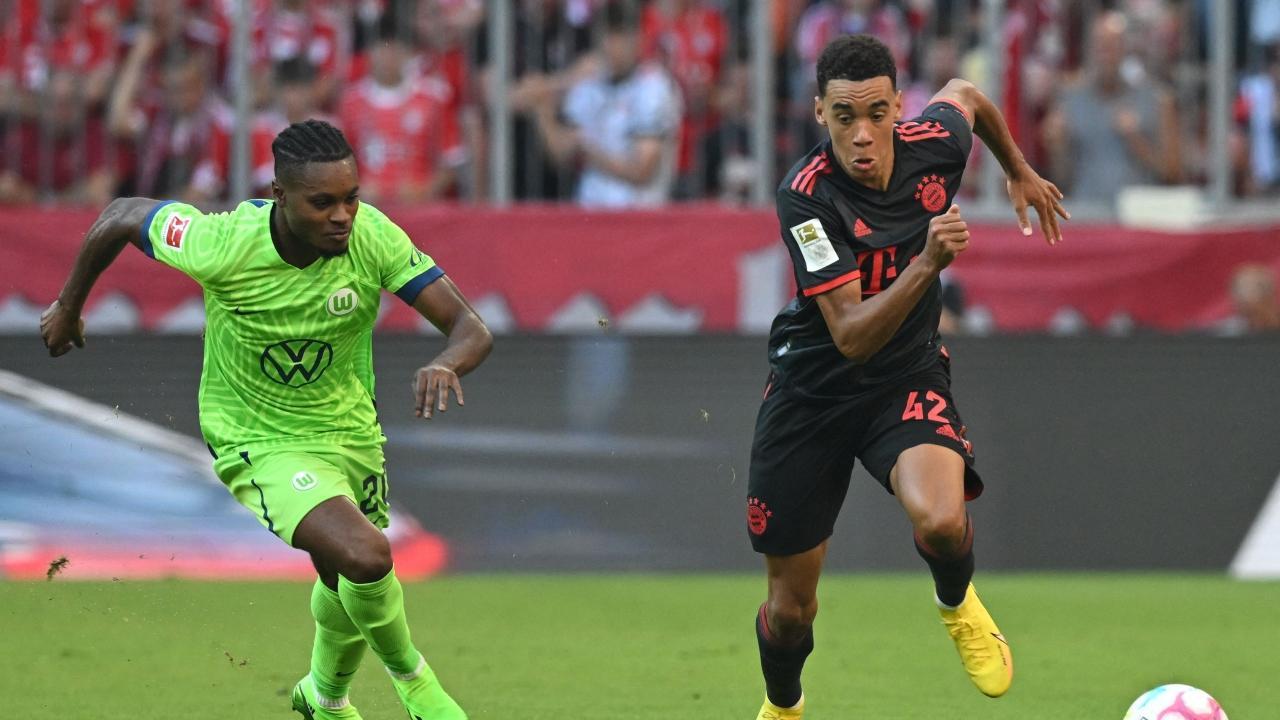 Ridle Baku and Jamal Musiala vie for the ball during the Bundesliga match between Bayern Munich and VfL Wolfsburg. Pic/ AFP

With only three competitive games played in the 2022-2023 Bundesliga season, the attacking mid not only scored four goals but grabbed the record for the youngest German player in the league's history to score 14 goals.

The Stuttgart-born player outpaced German football icons such as Uli Hoeness, Karl-Heinz Rummenigge, and Gerd Muller at an age of 19 years and 169 days.

Only Englishmen Jadon Sancho in the shirt of Borussia Dortmund reached the mark 24 days earlier.

With Lewandowski heading for Barca and Haaland leaving for Manchester City, the Bayern rookie is sending fans, pundits, and media into rapture, reports Xinhua.

The clips show the youngster in a snake-like way winding around two opponents after being down on his knees for a moment and setting an undefendable shot right after.

Former German international Lothar Matthaeus said Musiala is a safe candidate to win the FIFA award for the World's Best Footballer in the future, while Stefan Effenberg said the Bayern youngster is a must for the starting eleven in the German national team.

Due to his skinny legs, teammate Leroy Sane had named the rising star "Bambi" talking about a popular young fawn figure in an animated film.

German media said, the former "Bambi has developed into a gunner" and is the ray of hope for the German team at the upcoming 2022 World Cup in Qatar later this year.

Julian Nagelsmann praised Musiala's breakthrough as he flourishes in the team's new system counting on a rage of alternating strikers.

"He is an overall humble person who always wants to learn and improve. As a coach I don't have to do much to make him go," the Bayern coach said.

Musiala is answering the hype around with shy smiles assuring he is always wanting to invest all for his team's benefit.

In a charming mixture of German and English, he is talking about his dream coming true while his efforts to professionalize his daily routines remain in the background.

Stories about his efforts to update his physical state including sleeping patterns come along with reports about his inexhaustible range of talents.

Playing chess and fancying the Korean martial arts of Hapkido are mentioned next to his early emerging poetry talents as he won a poetry competition at a London primary school talking about his time at Chelsea.

"My dad opens the door and says 'good luck for your first trial for one of the best Premier League football clubs'. I'm playing like never before."

To play like never before now seems to continue in Bayern's shirt. But all airs and graces seem nothing Musiala is heading for.

"Sometimes people might put too much into him and his story. In the end, he just loves to play football," Thomas Muller said.

Next Story : It's unacceptable: Chelsea manager fumes at refereeing decisions