The summer fruit you ignore

As a proposal to seek a GI tag for the Badlapur jamun makes it to the news, here’s a look at why this ancient Indian summer fruit isn’t as popular as it should be 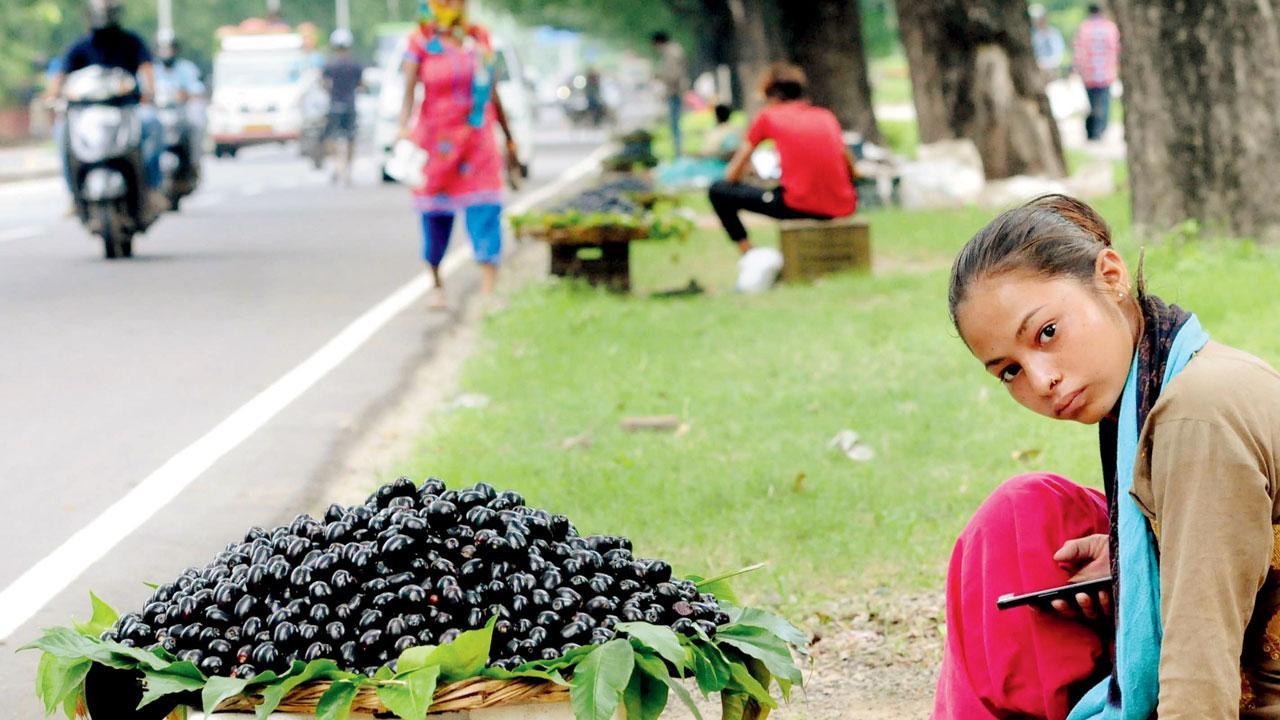 A street vendor sits with her pile of fresh jamun at a roadside stall in Chandigarh. Pic/Getty Images


Jamun, just like mango, is a summer fruit. Just not as popular.

Native to the Indian subcontinent, the sweet purple fleshy berry recently made it to the news when a young resident of Badlapur near Thane sought a geographical indication (GI) tag for the fruit, with the decision being seconded by the Thane collectorate.

The jamun has a distinct taste—a mix of sweetness, sourness and tartness, followed by an astringent aftertaste that leaves dryness in the mouth. It stains the tongue a deep purple, not to mention your clothes if you are a messy eater. “The kala-khatta flavour of the gola comes from the jamun,” says Goa-based food writer Vikram Doctor, 53, who first experienced jamun as a gola at Tardeo’s Swati Snacks.

Deeply intertwined with Indian folklore, the jamun regarded as the “fruit of the gods” finds a mention in Indian mythology. “The Puranas divide the cosmos into seven continents, the centermost it called Jambudvipa, the island of jamun. It is said that this is the world we inhabit,” shares Doctor. In Ramayana as well, the jamun finds a mention. Legend has it that Lord Rama managed to survive his 14-year-long exile from Ayodhya on a diet of jamuns among other foraged forest foods. It is therefore, that they say, that often temples dedicated to Lord Rama have jamun trees in the

Why then does this traditional fruit not make it to Indian kitchens as much as it should? “Jamun, like all Indian summer fruits, including chikoo, is competing against the mango,  which is like the dada of fruits. It gets overshadowed by our insane passion for the aam,” thinks Doctor, adding, “The kind of work that has been put into cultivating superior varieties of the mango using grafting, hasn’t happened for the jamun. It is in fact, one of the most important crops for the Indian ecosystem. Besides humans, a huge variety of animals and birds, including fruit bats, monkeys and jackals consider it an important part of their diet. Its flowers are also used abundantly by bees for honey.”

While some trees may struggle through the unforgiving Indian summer, not the jamun. “It is a beautiful, large, spreading and shady tree. In fact, the British chose it as one of the main trees to plant along the avenues of New Delhi when they were building the new capital,” says Doctor, whose most defining memory of a Delhi summer includes walking on long pavements plastered with the squashed purple fruit. “We have romanticised summers because our school vacations tend to fall during the season, but truth be told, our summers are very tough. We live in an incredibly hot place, which is getting hotter. Jamun, which leaves your mouth dry, represents the India summer best—life is sweet but also tough,” he adds.

When it comes to health benefits, there are plenty in the jamun, assures Mumbai nutritionist Shweta Shah “Loaded with vitamin C and iron, it improves haemoglobin levels. It is one of the best home remedies for stomach pain, arthritis and diabetes—it has a low glycemic index, which keeps blood sugar levels in control. The fruit cures dysentery and flatulence, and keeps the heart healthy as it has good cholesterol. Its antibacterial and anti-infective properties strengthen your gums and teeth.” Not only the fruit, even its seeds—when dried and powdered—have multiple benefits. “They contain chemical compounds called jamboline and jambosine that decrease the rate at which sugar is released into the bloodstream, while also increasing the production of insulin. This makes it excellent for diabetics, and patients of hypertension,” says Shah, adding that the best time to have jamun is through the monsoon months of June and July, at the start of of the rainy season.

And, what makes Badlapur jamuns special? “It is the laterite soil of the region that makes them rich in iron,” says Shah, adding, “The climate of Badlapur is perfect fit for the jamun tree. These are juicy and sweet. Besides, they are a source of income for many tribal communities. They deserve preservation and protection since their numbers have reduced drastically in the last few years.” 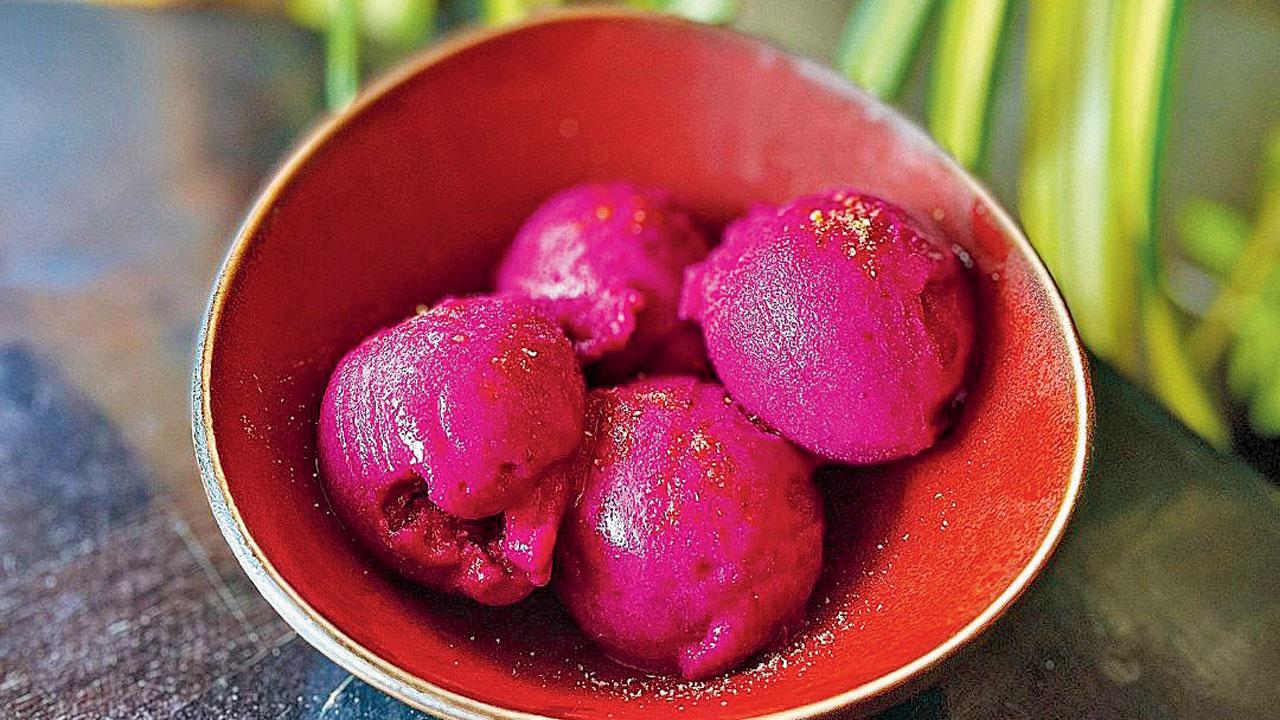 Jamuns first caught Chef Chirag Makwana’s attention while playing with friends outdoors at his home in Lokhandwala. “Just before the monsoons, we would see jamuns fall below a tree. Not knowing much, we would wash and eat them. The part that excited us was that the fruit would stain our teeth purple, making all of us giggle.”

Method
Place all the ingredients in a pot and simmer for 10 minutes. Allow the mixture to cool down and then make a puree using a food processor.
Once done, pop the mixture in the freezer until it sets. 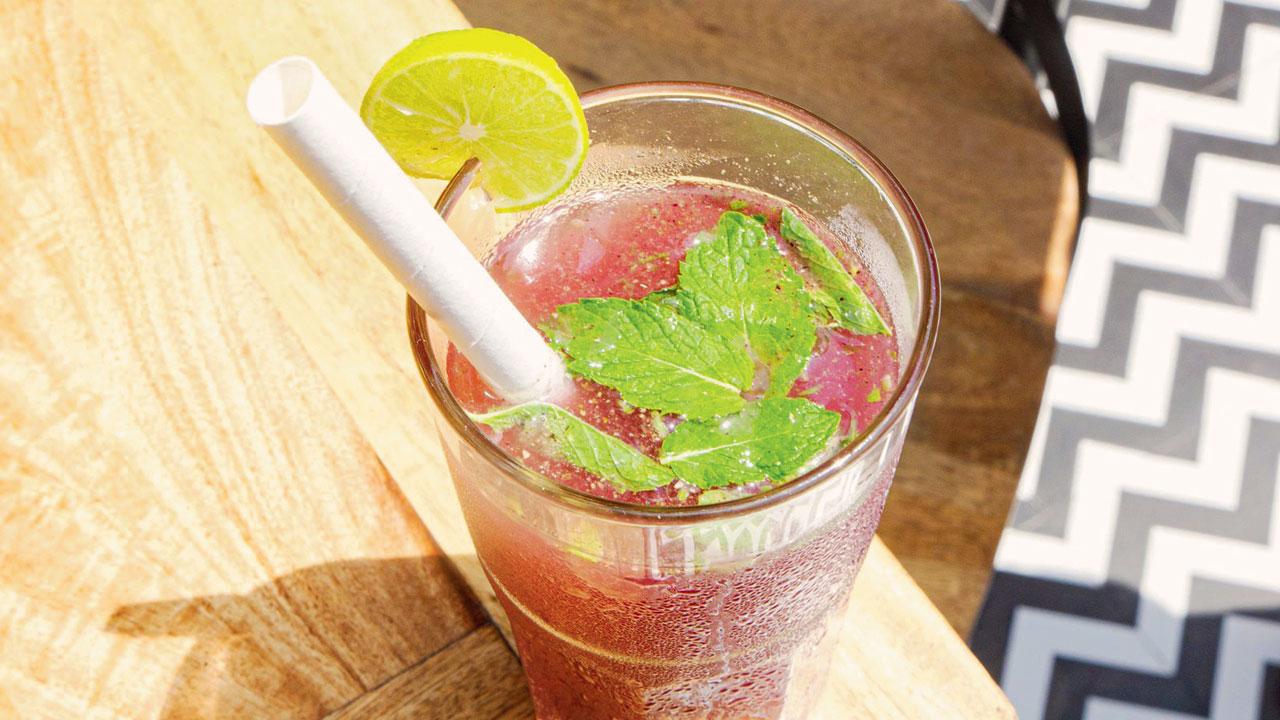 For Chef Shantanu Gupte of The Bandstand Pantry, kala jamun takes him back to his childhood, when he would visit his grandparents’s heritage home in Chiplun. “My cousins and I would climb the jamun tree to pluck fresh fruit. We even fell a couple of times but it never stopped us. We would then make kala-jamun sharbat with my grandmother who would soak the fruit in sugar, in a chini mitti ka bottle for a week. Every summer takes me back to that memory.”

Method
Mix all the ingredients in a serving glass and stir. Serve chilled with ice cubes and sprig of mint. 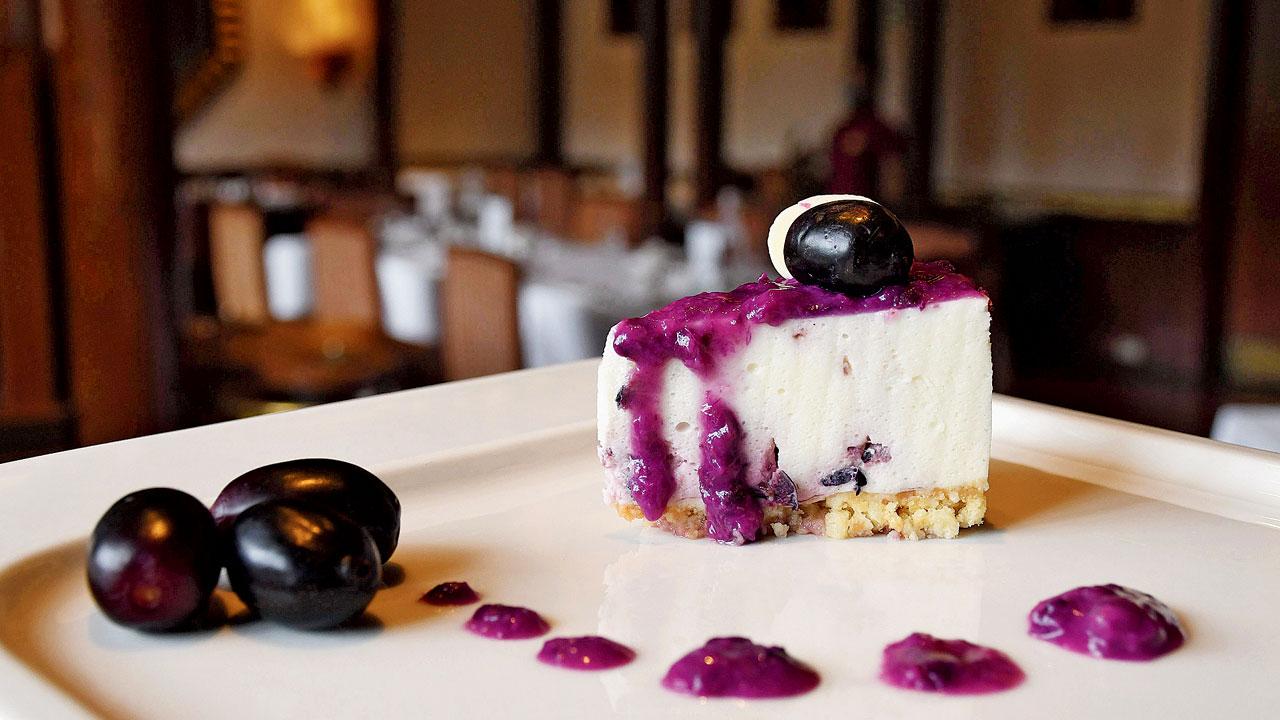 “Jamun sharbet was one of my favourite summer drinks when made by my grandmother,” says Swanand Thipsay, sous chef, ITC Grand Central, adding that it was a common drink in many households. If you are a fan of mojito, Chef Thipsay has a tip. “A great Jamun mojito can be handcrafted using fresh jamuns instead of lemon juice. It is a definite thirst quencher during the summers.” 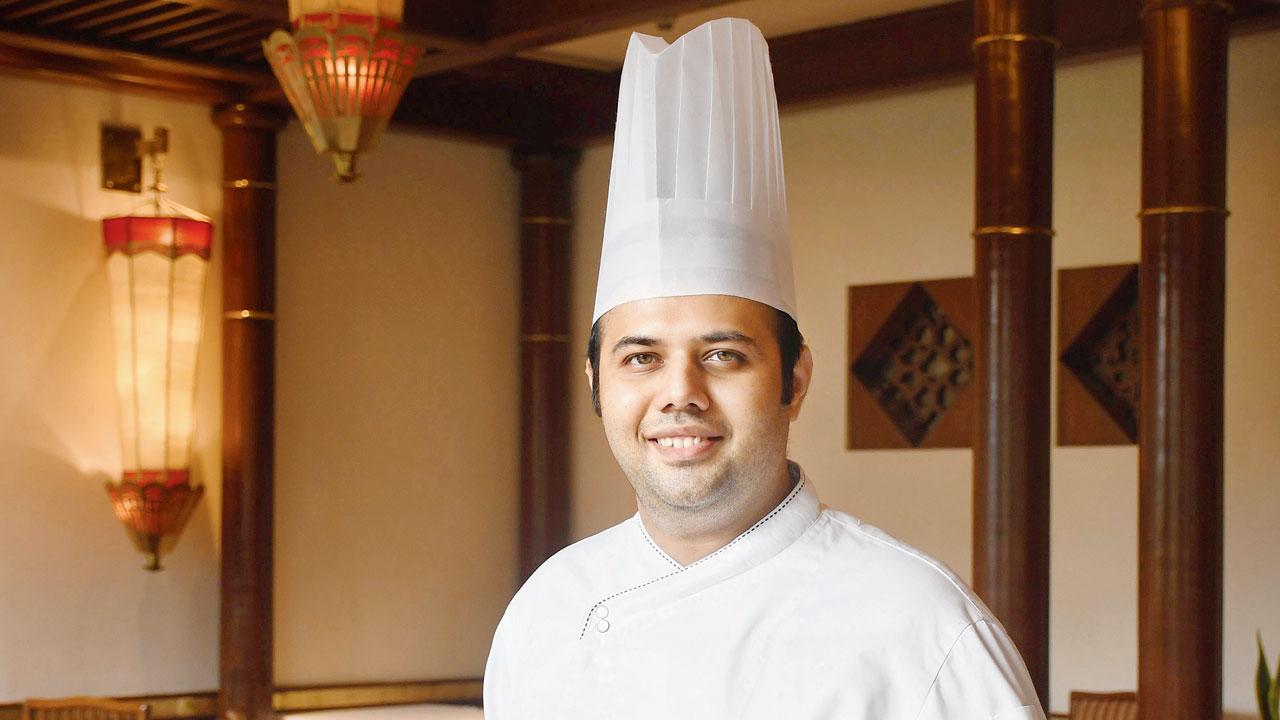 Method
Crush the biscuits and combine with melted butter till it binds well. Place this mixture at the base of the mould. Now extract juice from the jamuns using a cold press juicer. Reduce the juice over low flame till it becomes thick and syrupy.

Whip the cream cheese and sugar till it dissolves completely. Slowly add the eggs in this one by one to ensure that the mixture doesn’t curdle. Add in the melted white chocolate in this and continue whipping.

Add the jamun juice to this and allow it to lightly incorporate. Do not overmix, jamun swirls should be visible in the cheesecake mixture. Pour into a mould of your choice and bake at 160 degree celsius for 40-45 mins.

Jamuns are very delicate and must be plucked when they are ripe, not over-ripe. Wash them gently with water without damaging the flesh and keep them covered in a muslin cloth in a fruit basket. They will last longer, without shrivelling, inside the fridge.

With inputs from Nasrin Modak-Siddiqi

Next Story : Handwoven professing of love