Frankly, didn't know that's how this 'old man and the khichdi' was meant to flow. Well, now you do. Even if I did: 'What if I didn't care?' Certainly didn't. 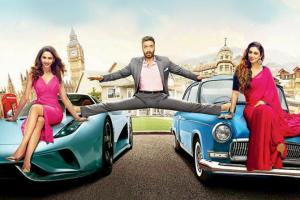 This film's opening sequence should count as an incredibly smart/realistic update on that standard, old Bollywood scene: The heroine (Rakul Preet) in this movie, after a drunken night, wakes up nude in the hero's bed/home. It appears that they could've slept with each other. Or at least the heroine, as with the movies back in the day (think DDLJ), instantly assumes that they did. But rather than feeling guilt/shame over the proverbial loss of izzat, she just wants to ensure that the guy doesn't make a big deal of it instead.

It's just sex, or a one-night-stand, she wants him to know—nothing more. What follows is also movie's best one-liner, questioning the idea of fidelity, as it's been traditionally accepted: "Ek baar sone se pyaar ho jata hai? Toh ek baar sone se pyaar kho kaise jaata hai? (Do you fall in love the only time you sleep with someone? Then why does one assume you have altogether fallen out of love with someone, because you once slept with someone else?)" Especially referring to the early scenes, because that usually sets the tone for the rest of a film. Or at least that's what one presumed, going by this picture's promos, or at least being aware of the basic plot.

Ajay Devgn plays the lead role; and his own age, for once. He's 50. The girl is, I guess, 25. Superstars older than Devgn have probably been with women much younger. The lead couple in the film lives in London, where I can't imagine anyone furiously batting an eyelid over such a match. You might wanna know more about how an adult, mature, urbane relationship of this nature might pan out, with its own quirks, and plausibly fresh ground-rules. You wait rather expectantly. R Balki's Cheeni Kum (2007), also starring Tabu, then 35, interested in Amitabh Bachchan, then 64, worked along those lines. Likewise, this is supposed to be a romantic comedy. And there is no way to pull off that genre, without a certain level of subversion.

And, yet, some films just seem to have a switch on their timeline, from whereon things just go downhill thereafter. For me, it's again an early moment in this movie when Singham plays in the background score. Devgn's hatta-katta character impresses the young girl, beating up a bunch of goons on the street. She is floored. Not that the rest of the script has much to do with that scene—it shifts to India. Just that things simply go adrift into a 'territory' that film-trade folk might call 'UP-Delhi/ Punjab'.

Not talking about songs, and dance. That has its own place. The film just stops being about a relationship; let alone romance, or comedy. It's almost like the filmmakers are certain the intended audience won't connect much with such a young-old love, by itself, in a single screen theatre. Well if you think they can't take it, then why make it? All stories, one can argue, starts with the fundamental question: 'What if?' The underlying theme or starting point here appears to be: 'What if a 50-year-old man, having consensually separated from his wife, briefly returns home, among his kids, and father and mother, etc?' Frankly, didn't know that's how this 'old man and the khichdi' was meant to flow. Well, now you do. Even if I did: 'What if I didn't care?' Certainly didn't.