There are a few genuine shockers, but it is largely a simplistic tale put together in a complicated fashion. 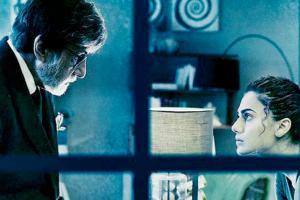 Sujoy Ghosh takes us back to the basics with his latest offering. Badla, as the title suggests, is a revenge-drama loosely based on the Spanish thriller, The Invisible Guest. Like with the original, it's not too difficult to decipher the end a good while before we get there.

Yet, Badla isn't predictable. What it certainly does lack, though, is the smarts that could be expected. Ghosh designs this film as more than just a whodunit. He lays out his cards neatly, unfolding one incident after another. So, it's all about cracking codes in the wobbly story, narrated by Naina (Taapsee Pannu), a top-notch businesswoman embroiled in a murder case.

She was found injured in a hotel room, with her lover lying dead on the floor. There is no sign of anyone else entering or leaving the room. Naina maintains, she didn't kill her lover. The film revolves around a single meeting with her potential lawyer, Badal Gupta.

Badla soars because of its unpredictability before we arrive at the end. The key lies in the names of its lead characters - Naina (eyes), a play on how truth depends on whose point of view is being considered. There is an inherent Rashomon philosophy in the narrative. Badal's name is a play on the film's title itself. Ghosh uses these props to confuse his viewers, create mirages that they are frequently misguided by in their tryst to keep the guessing game going.

At one point in the midst of this rigmarole, we look towards the screen and wonder why Bollywood doesn't exploit the terrific Amrita Singh enough. As Bachchan and Pannu battle it out in a verbal duel, it's Singh who does the emotional heavy lifting. Of course, both Bachchan and Pannu are terrific actors, but Pannu's Naina is played in a rather single note. Naina wins awards, is intoxicated by power, and is guilty about her affair. But the required nuances demanded by the narrative are missing from Pannu's act. There are a few genuine shockers, but it is largely a simplistic tale put together in a complicated fashion.

As admirers of thrillers, we are not failed by Ghosh. The tapestry of tension that he weaves is unparalleled. The camerawork by Avik Mukherjee deserves a mention. Set in Glasgow, the setting plays a part that's as essential as the characters. I was sold to the ride that Badla took me on; but, does it live it up to the thrill of Ghosh's Kahaani? Nah, that will need cleverer writing. Yet, this is worth a watch.

Also Read: Exclusive - Taapsee Pannu on Badla: I am a very vindictive person by nature