While Ayushmann is busy packing a punch on the first day of ‘An Action Hero’, lets take a look at some of the iconic style moments of the actor which proves that Ayushmann is the most fashionable ‘Hero’ of Bollywood.


He is an astounding actor who rarely fails to impress the audience with his exceptional acting skills, a charming crooner who strikes a right chord with avid listeners every time he sings in his magical voice, an ‘Insta-poet’ by the day and a star performer by the night. His brave choices of films, his unmatched on-screen caliber and his social ‘wokeness’ makes him a people’s actor. A sought after star who rules box office and millions hearts, a perfect blend of charm, wit, glamour and everything good…he is none other than THE Ayushmann Khurrana!

Ayushmann who smelled success right after his first film, ‘Vicky Donor’ and went on to amaze the audiences with his bold movie choices, it wouldn’t be wrong to call him the new-age perfectionist of modern Indian cinema. Although his acting prowess is a well-known phenomenon, Ayushmann’s unique fashion game is something which leaves an impressive mark on his fans and fashion police.

Renowned for versatility and unconventionality, currently on the silver screen, Ayushmann is seen in a never-seen-before avatar of an action hero in his freshly released film, ‘An Action Hero’. While Ayushmann is busy packing a punch on the first day of ‘An Action Hero’, let's take a look at some of the iconic style moments of the actor which proves that Ayushmann is the most fashionable ‘Hero’ of Bollywood. 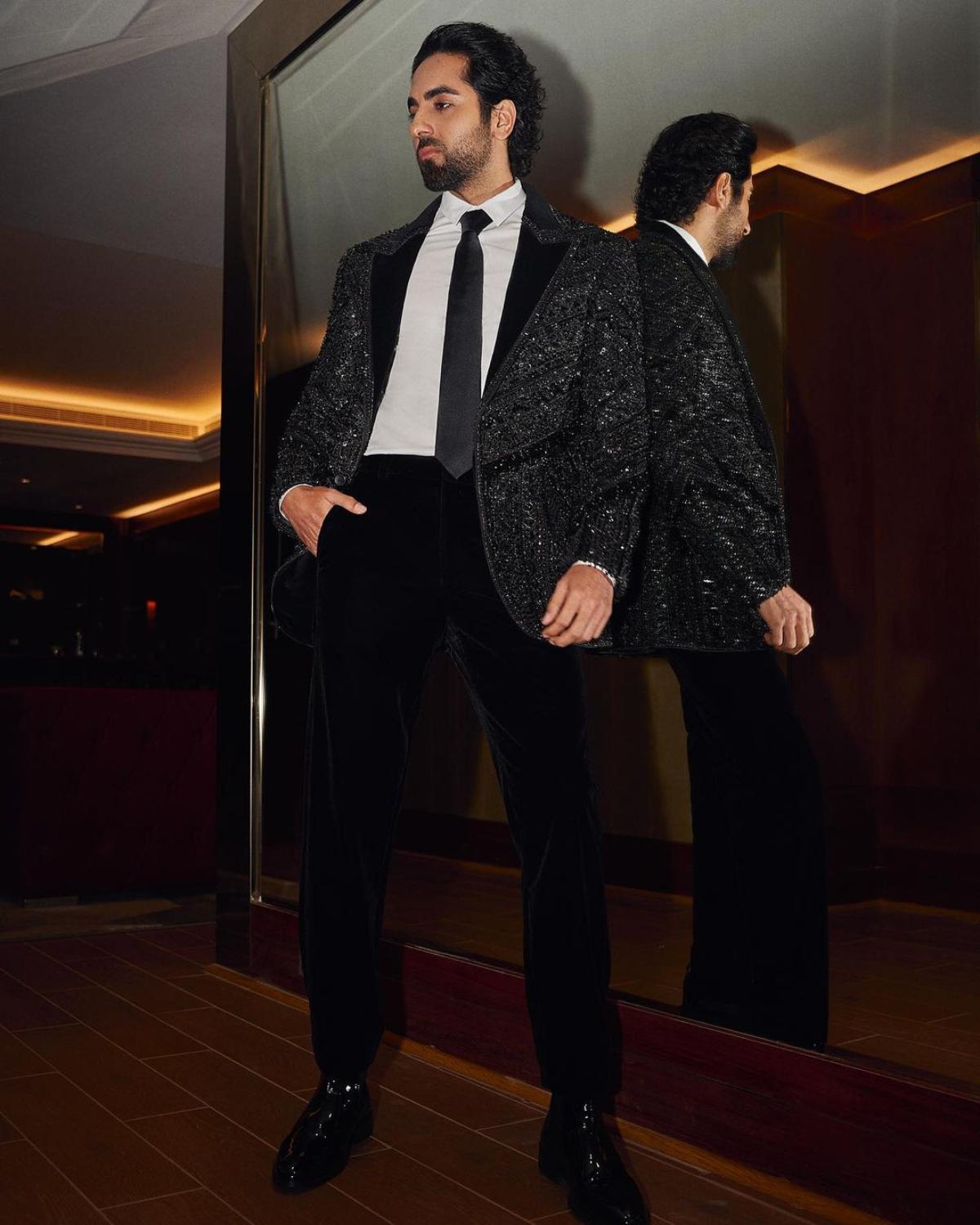 Black Magic: Suited-up in Shantanu & Nikhil’s creation, Ayushmann Khurrana recently dropped his photos on Instagram looking nothing but bewitching in his all black ensemble. A true dapper covered in black, Ayushmann evoked pure elegance and glamour as he channeled his inner superstar in black embellished blazer. The velvet trouser beneath was the real surprise factor. Also, the velvet lapel over the blazer deserves special mention. With black tie and white shirt beneath, the ‘Article 15’ actor rocked the outfit with innate élan. A debonair in black, the moment we set our eyes on Ayushmann, the classic Hindi song plays on in our mind…‘Badan Pe Sitare Lapate Hue’! 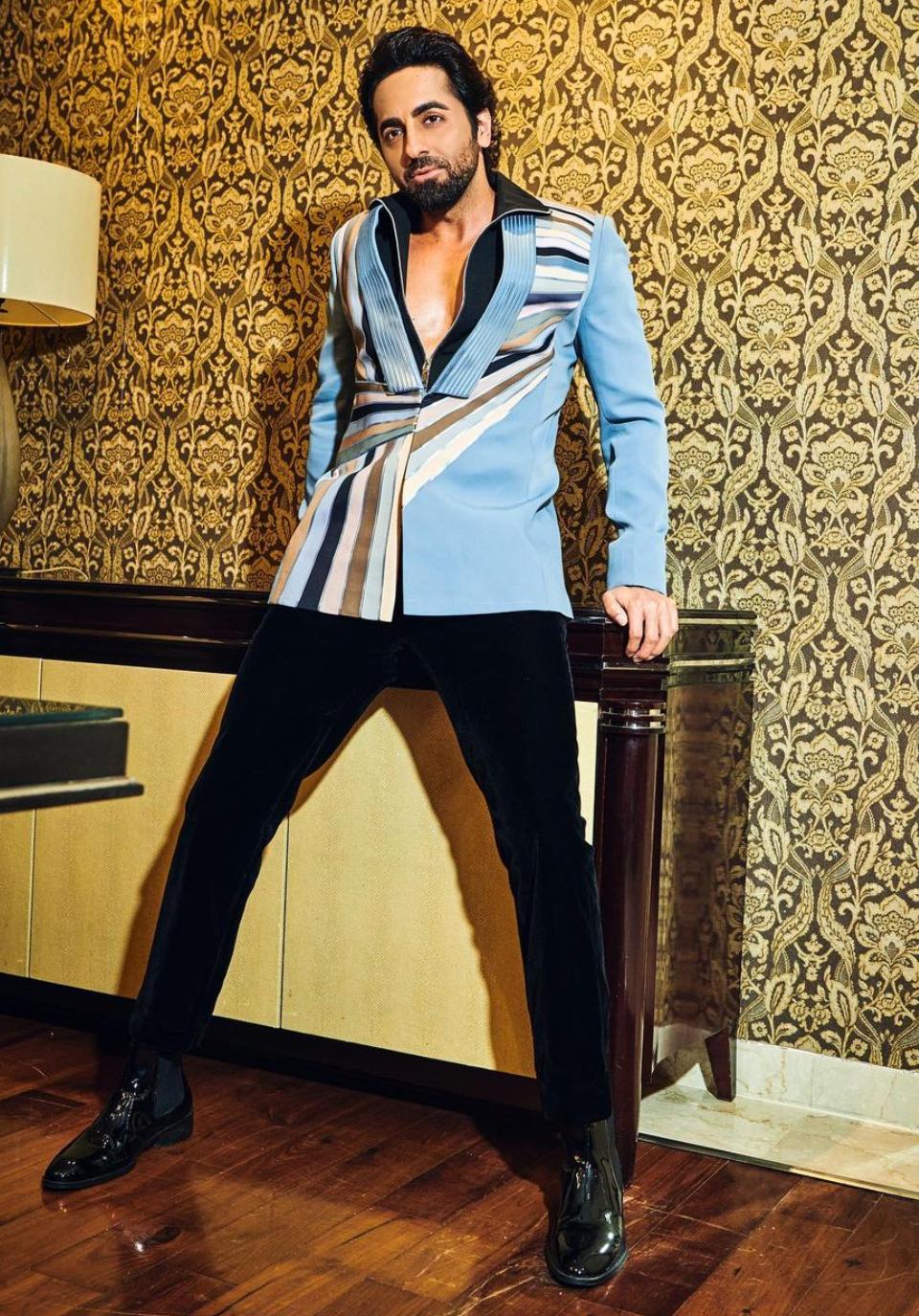 Bleed Blue: Known for his effervescent styles and impeccable fashion sense, Ayushmann is one such actor who loves pulling-off traditional suits and tuxedos with modern twists. Before taking the internet by storm with his black outfit by Shantanu & Nikhil, the ‘Chandigarh Kare Aashiqui’ star had made heads turn when he donned a blue box blazer which had colourful stripes all over. This time too, the actor picked black velvet trousers over traditional ones and he made the right choice! To strike off his look, the actor wore sparkling black shiny shoes. A quirky blue blazer along with velvet trousers is something never seen before on the red carpet yet. This proves that just like Ayushmann, his fashion sense is simply awesome. 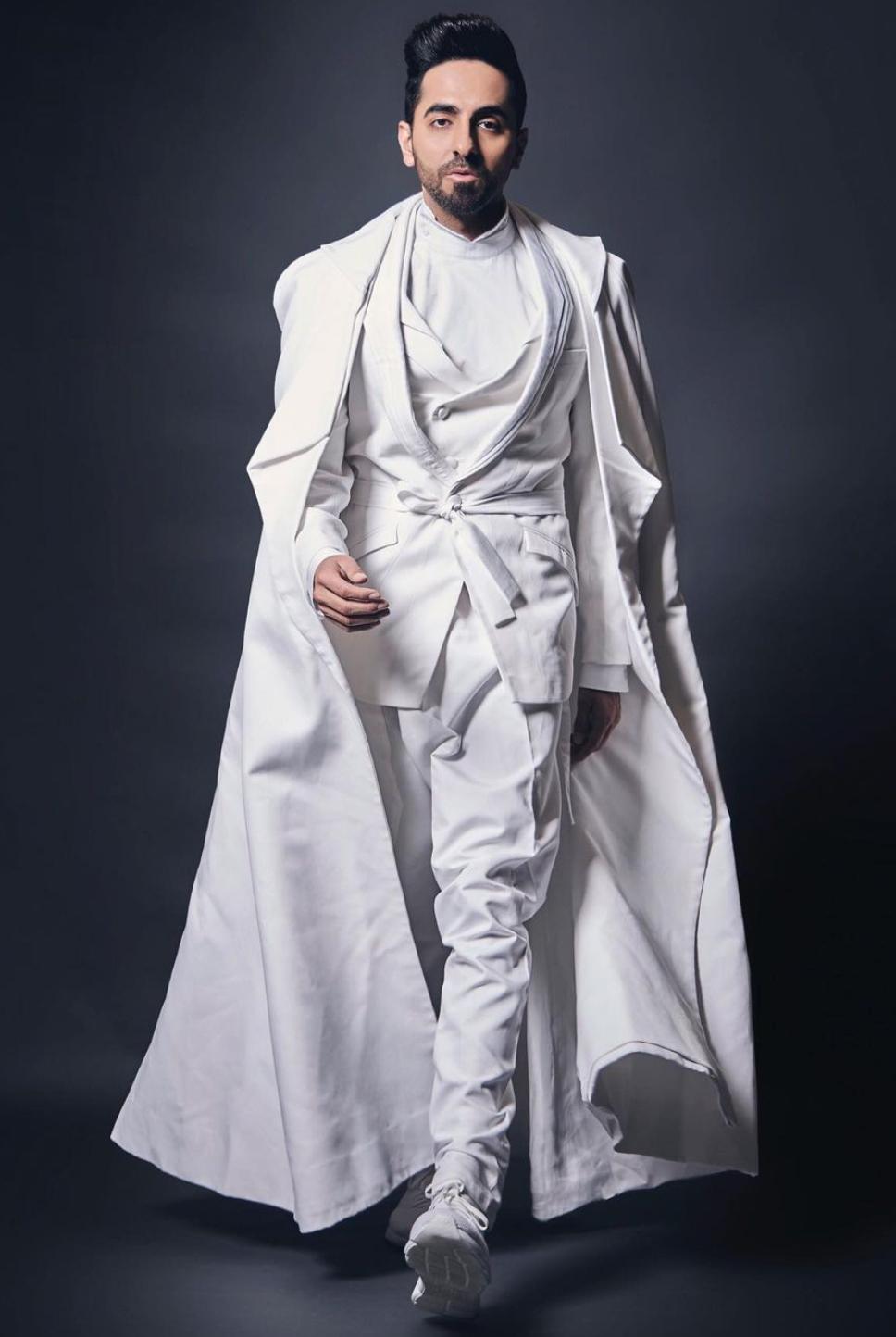 White Wonder: Well, well, well…if there is somebody who can give Ranveer Singh run for money in terms of fashion and style, then it's got to be Ayushmann Khurrana! Right from slipping on gender fluid apparels to eye-popping colourful ensembles, Ayushmann has done it all. Back in 2019, Ayushmann turned into an angel when he rocked an all-white suit. What made his overall outfit stand out was the white cape which made him look like an absolute superhero. The multi-lapel cape-suit which was designed by Gaurav Gupta made waves as Ayushmann hit the red carpet at one of the award ceremonies. The tie belt, finely placed buttons on the blazer and chunky collars on the cape, etc. all these elements upped the grandeur of Ayushmann’s ensemble. To round off the super spotless look, the ‘Anek’ actor sported white sneakers by Dior. Indeed, a ‘Wonderman’ in white! 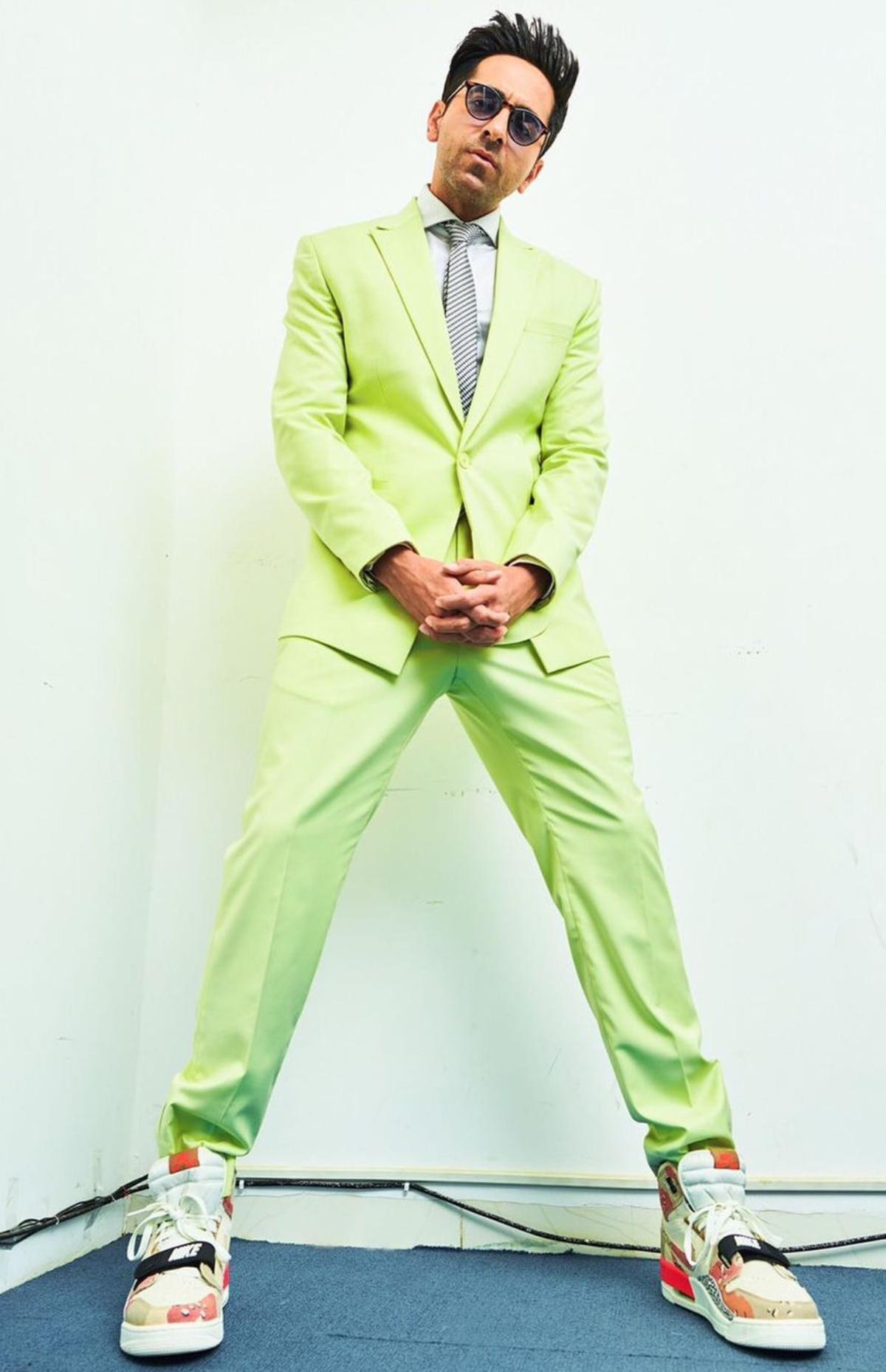 Neon Attack: While Bollywood actors, especially the young brigade, are often seen stepping out in neon/ funky colours, Ayushmann did it before when it was cool. Back in 2019, the ‘Badhaai Ho’ actor was spotted sporting a neon green summer suit and how! To tone down the eye-poppy outfit, the actor wore a white shirt along with a striped tie. The high-tops chunky sneakers by Nike gave a cool, care-free and wild vibe to his otherwise summer suit. To finish off his snazzy look, the actor wore black sunglasses. The flamboyant filmi boy of Bollywood, Ayushmann sure has the guts to play with neon colours. 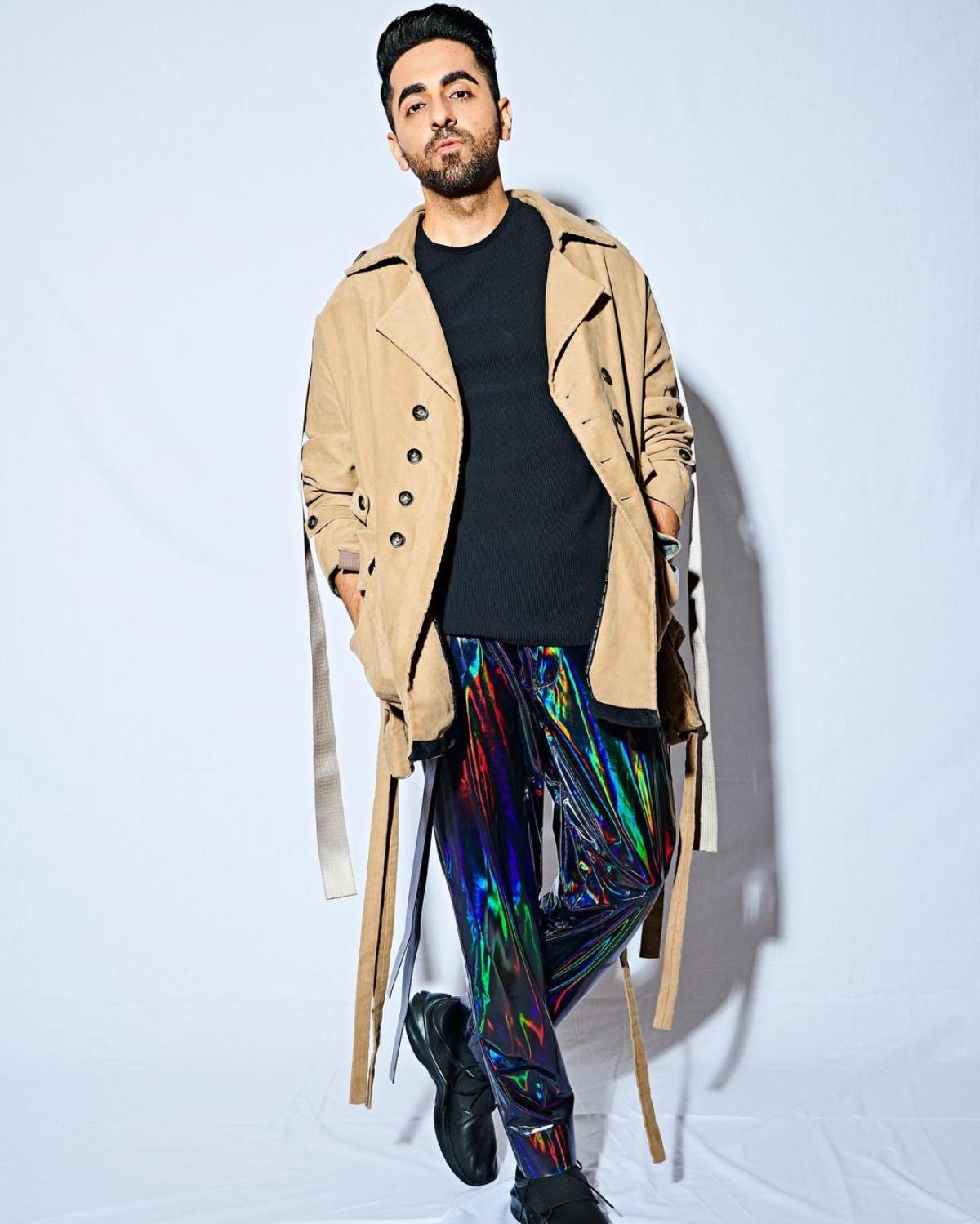 Hello Holographic: Bringing his quirkiness to the fore, Ayushmann Khurrana took the internet into frenzy when he dropped his photo donning holographic synthetic pants. A one of a kind statement piece, Ayushmann’s quirky pants alone became the centre of attraction when he stepped out rocking such bold bottoms. Ayshmann wore the pants in the most unexpected way; he paired it with a black tee and layered it up with a nude overcoat, which was a smart way to tone down the quirk quotient of the overall ensemble, so claps! Instead of going overboard with colourful sneakers, the actor opted for black shoes and we are not complaining! The entire outfit which was a mix of colours, patterns and style, deserves thumbs up and moreover, it’s Ayushmann who deserves a pat on the back who managed to carry such a whacky ensemble effortlessly. Well played, ‘Hero’!

Next Story : 'An Action Hero' movie review: Retraction of a hero