On the sets of Housefull 4, Kriti Sanon saw this group of children perform especially for her and the actress was overwhelmed by the sweet gesture 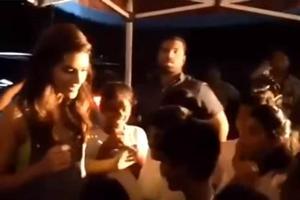 
Kriti Sanon gets a tribute from an NGO on the completion of the wonderful five years in the industry. The actress saw a beautifully choreographed dance performance on her songs through the years. On the sets of Houseful 4, the actress saw this group of children perform especially for her and the actress was overwhelmed by the sweet gesture.

Here's how the actress shared the act, "It was overwhelming to complete 5years in the industry.. But this is what really made my day!!  Thank you so so much for the sweetest gesture ever! These little kids are bundles of extraordinary talent!! Prepared this in a day to just put a smile on my face.. its this love that i work for.. thank you @danceoutofpoverty #Repost @danceoutofpoverty"

It was heartwarming for the actress, who has gained mass popularity in just five years, to see their gesture. The performance had songs compiled from the journey of Kriti from her years in the industry. The actress donned a wonderful smile after witnessing the kids perform.

Revolving around the theme of reincarnation, the film follows a non-linear narrative. It is scheduled to hit the big screens around Diwali 2019.

Entertainment stories of the day:

Next Story : Kapil Dev believes Ranveer Singh can portray him with conviction in '83