‘Stigma attached to the hijab is not new’: Muslim women speak about discrimination in Mumbai’s public spaces

A Karnataka High Court verdict upholding the state government’s decision to disallow hijab in classrooms has intensified discussions about the hijab and related discrimination. Although Mumbai is largely viewed as open and accepting, Muslim women in the financial capital say religious stigma thrives in the city’s local trains and workplaces 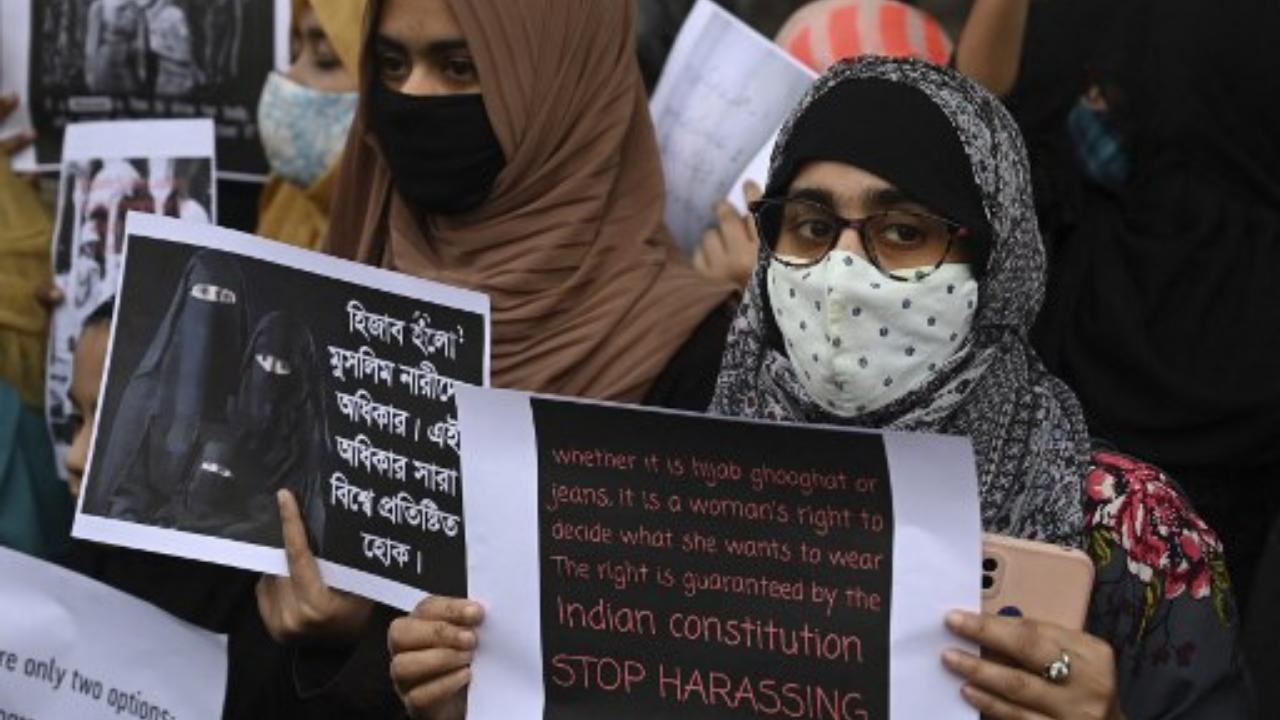 
The Karnataka High Court’s verdict to uphold the state government’s decision prohibiting Muslim girls from wearing hijabs inside classrooms did not just  impact the academic lives of girls from Udupi’s Government College, but also the everyday interactions of Muslim women in other states too. A matter that gained national attention and sparked multi-faceted debates on social media triggered real world consequences in Mumbai too, with incidents of discrimination against women wearing the hijab or burkha making news recently.

Mid-Day Online spoke to Dr Rukhsar Parvez Mandviwala, who was denied a seat on a train from Nalasopara to Mira Road in a general compartment, while carrying her eight-month-old baby; an incident that was brought to light by her spouse Dr Parvez Mandviwala on Twitter.

“Noticing my discomfort, a gentleman had vacated his seat and called me to occupy it instead. But as I was walking towards that vacated seat, the people sitting next to it blocked the seat and did not allow me to sit there. Instead, they called some other ladies who were standing at a distance wearing saris and asked them to occupy it. I felt offended and confronted them. I asked them if they did so because I was wearing a hijab. They did not reply and chose to look away and began grinning. The other passengers of the train also kept mum. So I remained standing.”

After the tweet went viral, the government railway police and a member of a political party reached out to them, offering to help them with filing a complaint, but the couple refused to do so as they believe the issue is not about one injustice done to one woman, but “the bigotry that is taking over our collective psyche”.

“As members of the medical profession, we have been groomed to fight the disease, not the patient. This is a social malaise. Hatred is being spewed in society because of Islamophobic narratives being peddled through films and social media, and by some TRP-hungry bigots masquerading as news anchors. This was but an expression of that misplaced bigotry and hatred,” says Dr Rukhsar Mandviwala.

Women in hijab are often denied a seat on the train or bus, and are generally considered to have a poor background. I've also observed that women are often more prejudiced towards hijabis than men.

In another incident, Dr Batul Hamid, principal of Viva College of Law in Virar resigned on March 16 in protest against on campus discrimination and alleged harassment over wearing hijab. In an interview to Mid-Day, Hamid stated that she felt targeted by the management and staffers only after the Karnataka verdict.

“The atmosphere in the campus gradually started to turn hostile and suffocating to me and it made me uncomfortable. All the good work I had done over the past two years was disregarded and I was taunted for wearing a hijab. I felt they were compelling me to resign. I decided to keep my dignity and resign instead,” Hamid said.

Multiple Muslim women state that not being able to access public transport in Mumbai on an equal footing is not a new challenge for them, but something they have always experienced even before the hijab issue in Karnataka became a national matter of concern. From being subjected to prejudices and stigma based on religious markers to facing outright discriminatory comments and accusations, they have observed it all, either personally or towards fellow community members.

Nilofer Patel, a pre-primary school teacher from Mira road, shares her experience of Mumbai local train journeys and listening to demeaning comments such as “illiterate”, “they don’t know when and how to travel on trains”, “their burkhas always make others uncomfortable in a crowded train”, “they hide their dirty clothes under burkha” and “they have so many kids and travel with all of them in the train” from other women in the ladies compartment.

“I did not respond thinking maybe it’s my mistake. I never thought of talking about it with my husband. Not everybody posts on social media about daily discrimination. This has come up now because a few women had the courage to speak up. We had taught ourselves to live with it,” says Patel.

Afiyah Qureshi, a city-based media professional, narrates another train incident from last year, when she and her mother, who was wearing a black scarf resembling a hijab, were questioned by a fellow commuter in the First Class compartment of a local going to CSMT about their tickets and were asked to shift to other compartment.

“I was taken aback and told her that we have the tickets. Shortly after, I eavesdropped on this lady's conversation with a fellow passenger. "You gotta ask these hijabis, they create a lot of ruckus while getting off in Mumbra." She had assumed we were going to deboard in Mumbra just because Mom had her head covered in a certain way. She also thought we didn't belong to the First Class and ought to switch compartments.”

“This is just an example of internalised hatred for women wearing the hijab. They are often denied a seat on the train or bus, and are generally considered to have a poor background. I've also observed that women are often more prejudiced towards hijabis than men,” she adds.

To protect themselves from mentally and emotionally disturbing conversations and attitudes that make them feel isolated, sources this author spoke to say the only way out has been self-censorship or refraining from expressing their religious beliefs. Whether it is while socialising with friends and colleagues or engaging in a professional activity, comments arising out of religious or community stigma always follow, which entrenches and encourages discriminatory beliefs among a group of people.

I fear in the coming days my school and management will ask me not to wear a burkha in the school. This will jeopardise my job, irrespective of my degree and educational qualifications.

For Qureshi, one such act of self-censorship was in her food choices. Sticking to vegetarian food when hanging out with former colleagues became the only way to avoid comments ridiculing her for eating ‘halal’ meat or enquiring about the restaurant’s food standards. Moreover, choosing not to consume alcohol as a practicing Muslim is another factor that made her felt isolated among certain groups.

“This (self-restriction) is literally the code by which every sensible Indian Muslim has to live every day, if they wish to protect their sanity- try to be as transparent as possible and blend themselves in to their surroundings,” she says. Patel echoes a similar sentiment. “We are always made to believe that we have to suppress ourselves if we have to live here.”

Patel had to stop herself from being too expressive or vocal about any issue on WhatsApp groups of friends and colleagues. She says lecturing about secularism and women’s empowerment is one of the common ways people of other faiths employ to look down upon the Muslim faith and identity.

“In some cases they act secular, but in our case they completely neglect us. Wearing sindoor or turban is normal, but burkha is not normal for them. There has always been a section of people who have hated burkha thinking that it hurts uniformity,” says Patel.

“Any mention of divorce and I'm immediately reminded about how Talaq is pronounced in Islam, leading the conversation to the Triple Talaq issue. If I advocate for the hijab, it is seen as a sign of patriarchy and conservatism. I feel very uncomfortable and experience low-grade frustration when such things are brought up. It's very triggering for a person to be made to feel that their faith is invalid,” adds Qureshi, who was also disallowed from offering prayers during Ramadan at her former workplace despite prior information and was ushered to a space where no one could see her praying.

While accessing public transport and social expression always came with its own challenges for women wearing a hijab or a burkha, the Karnataka HC verdict has only worsened their fears about potential prohibitory rules which will make it difficult for them to avail education and employment opportunities. Patel believes people who hate the burkha are encouraged by the verdict to further “discriminate and eliminate Muslim women from places of education and work”.

“I fear in the coming days my school and management will ask me not to wear a burkha in the school. This will jeopardise my job, irrespective of my degree and educational qualifications. Someone not wearing a burkha or a hijab will become more eligible than me for a job,” says Patel.

Next Story : From Navroz to fashion weeks: Here's a weekly roundup of Mid-day.com’s top features