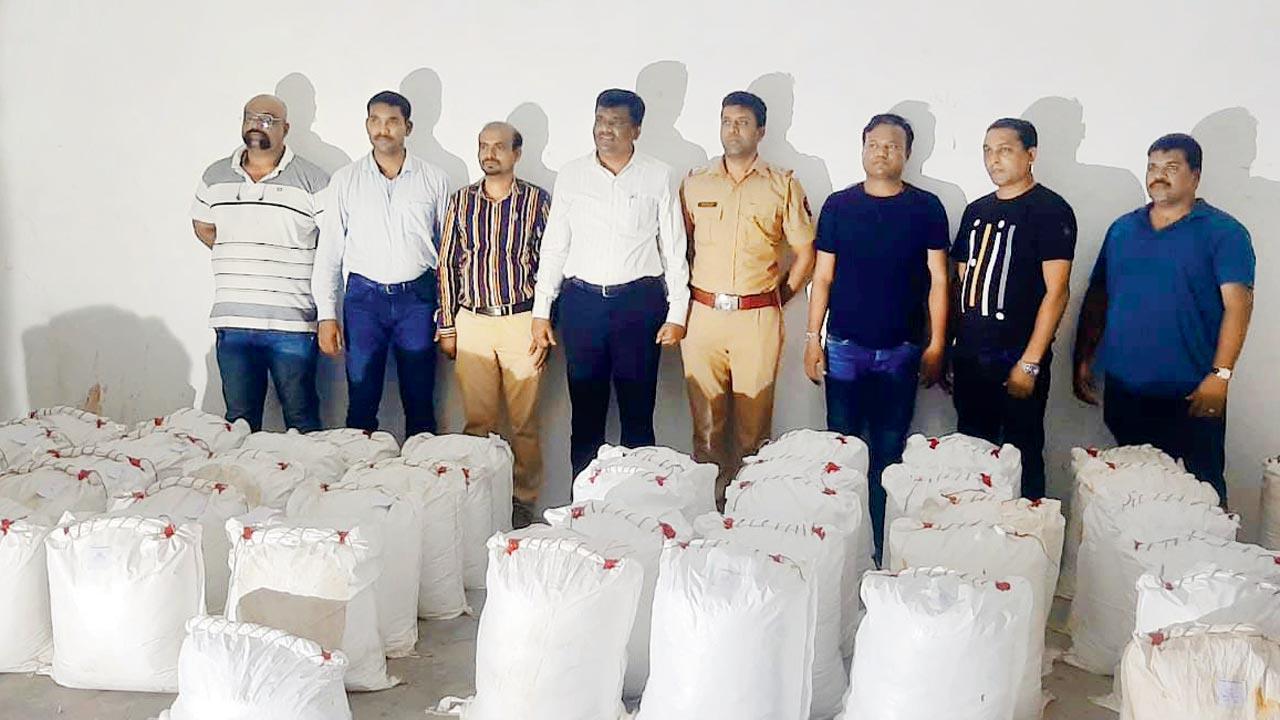 An ANC team with the seized drugs in Gujarat


Prem Prakash Singh arrived in Mumbai in 1996 hoping to make the best of his MSc in Organic Chemistry and MBA (Finance) degrees. He excelled in chemical production but a Telegram message in 2019 changed his life. The Dahisar resident switched to making mephedrone. In the recent drug haul, worth Rs 2,500 crore, Singh emerged as the sole manufacturer. His assets: 10 flats, five shops, land parcels, godowns, Rs 35-crore investments, Rs 5 crore bank deposits, benami properties worth crores and counting.

Citing their preliminary probe, sources in the Anti-Narcotics Cell (ANC) of Mumbai police said Singh’s properties and bank balances are just the tip of the iceberg. Mephedrone, also known by names like MD or meow meow, is a synthetic stimulant drug. The size of the seizure points to its growing demand, they said. 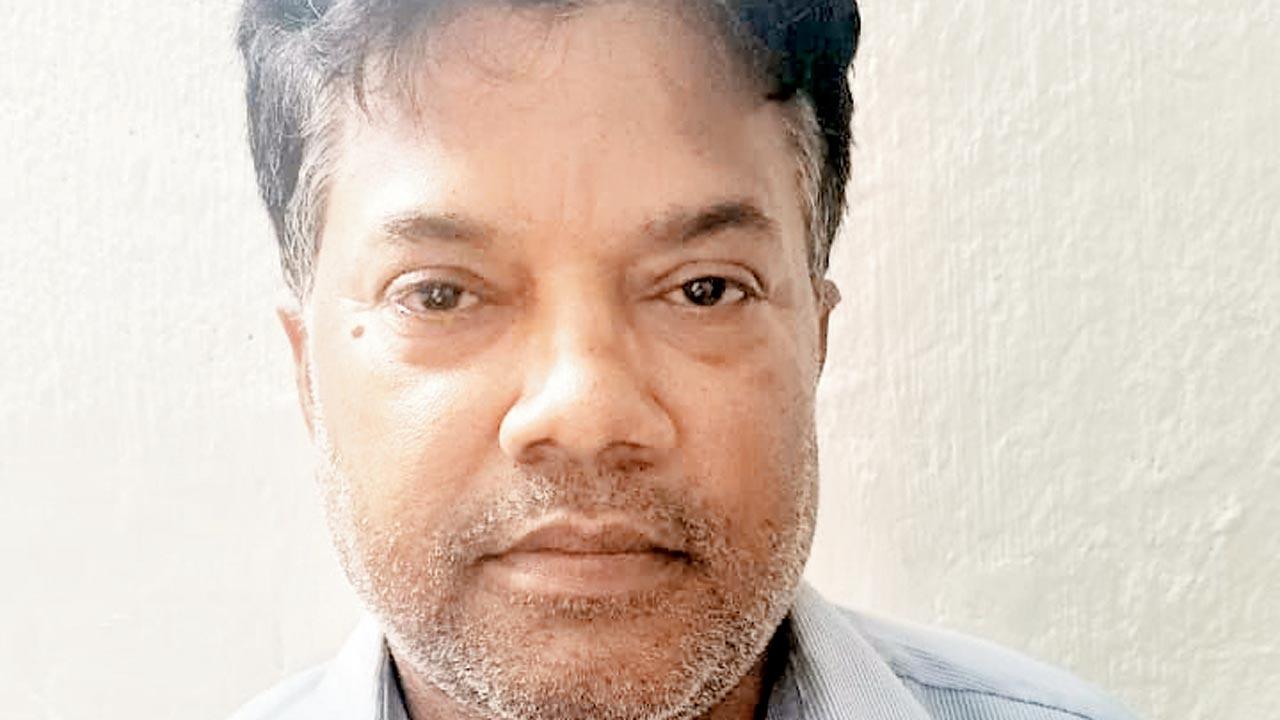 Singh, now 52, did his MSc in 1992 from Purvanchal University, Jaunpur, in Uttar Pradesh. He also finished his MBA (Finance) from the same university, before landing in Mumbai in 1996. He just had a flat in Nalasopara that had been gifted to him by his father-in-law.

Singh was always keen on owning a pharma company to capitalise on his experience. “He initially worked as a freelancer with chemical manufacturers and came in contact with many big chemical companies,” said an ANC officer privy to the investigation. 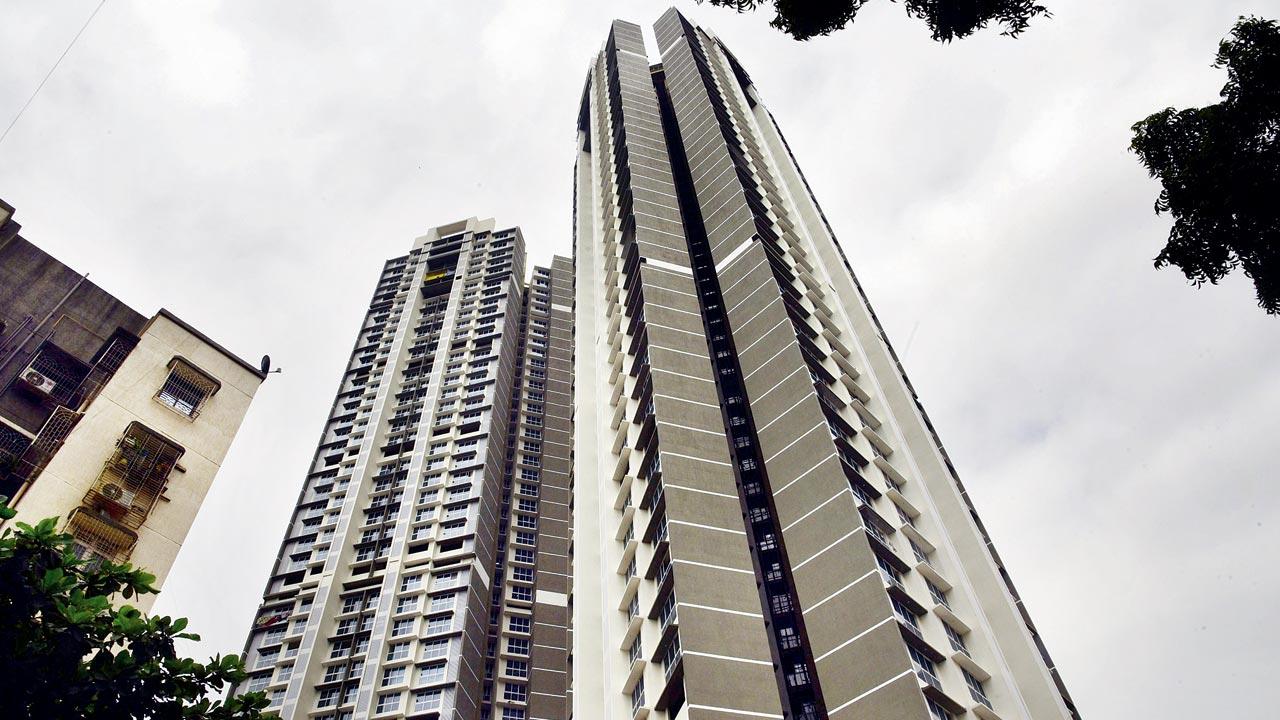 The ANC officer said a drug dealer got in touch with Singh after checking the latter’s profile that he could cook up more than 100 chemicals. “The chemical list also has the name of ketamine which is known as cocaine of the poor. On Telegram, the drug dealer coaxed him to make mephedrone saying it would help him earn in crores. Singh made the first consignment of just 50 grams at his home and sent it to the dealer who loved the quality of the drug he had produced,” said the officer.

Singh soon started utilising his contacts that he had made during his freelance job. He first got his touch with Kiran Kumar, an accused in the case and manager of Namau Chemicals at Ambernath, a leading manufacturer of chemicals. “He produced a large quantity of MD at the same chemical manufacturing company and sold them in the market with the assistance of various dealers with whom he interacted on Telegram in 2019-20,” Said Datta Nalawade, deputy commissioner of police, ANC. 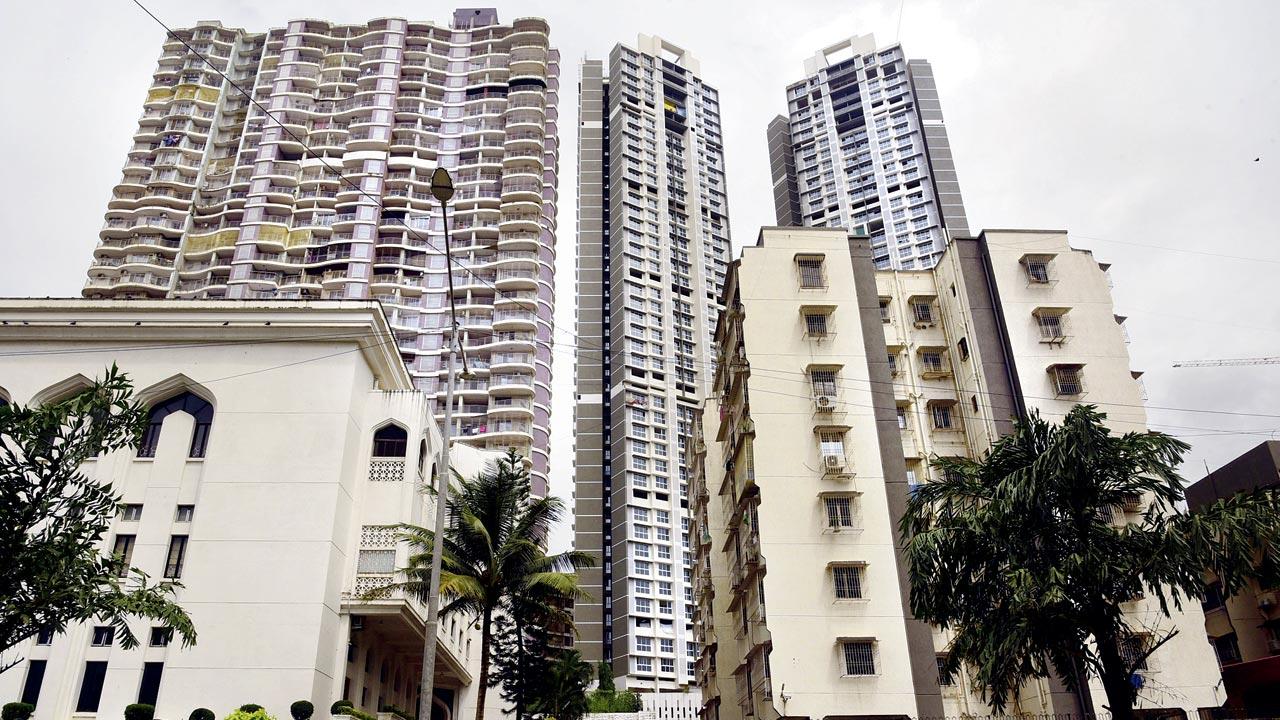 As his business grew, Singh began supplying over 100 kg a month to more than 35 drug dealers, mostly in Mumbai and Maharashtra. To produce more mephedrone, he shifted base to Gujarat’s Ankleshwar, where he started dealing with Giriraj Dikshit, another accused, whom he knew from his freelancing time. Dikshit was also a director of Infinity Research and Development, which is into making second-stage industrial chemicals. Dikshit, also a postgraduate in Organic Chemistry, helped Singh produce lots of mephedrone, and both earned millions of dollars. 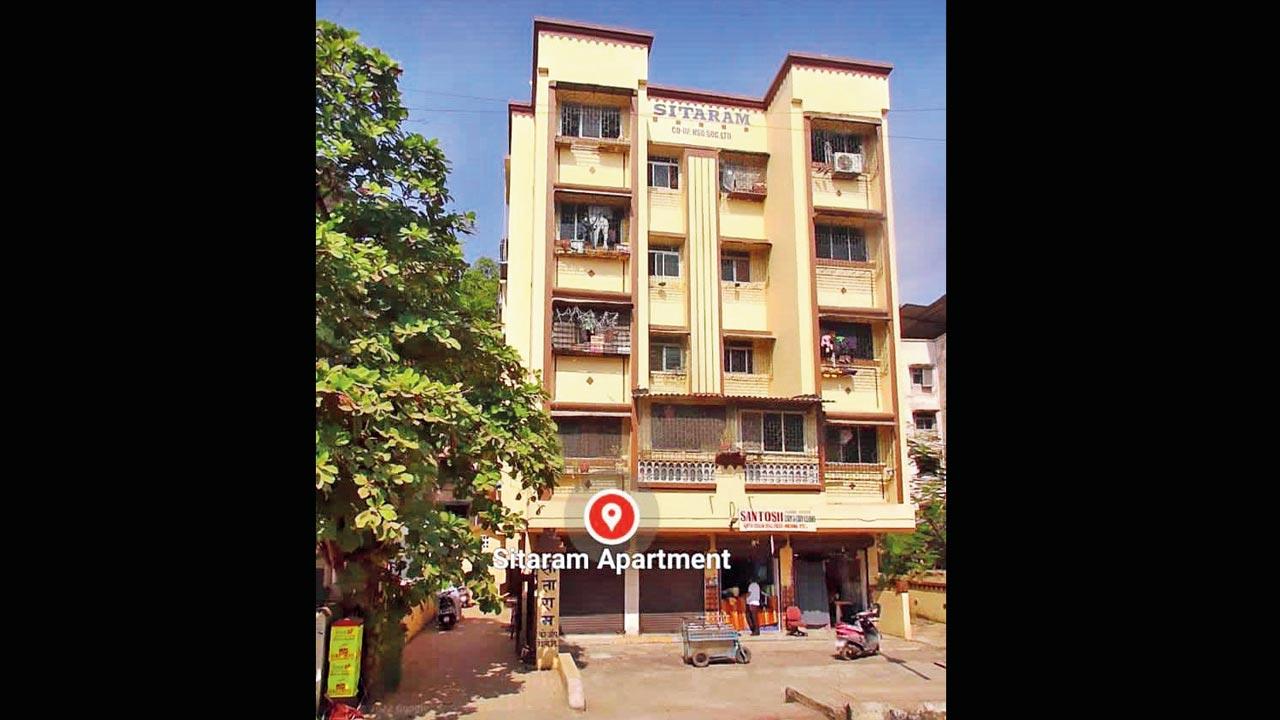 Singh’s godown at Nalasopara from where MD worth Rs 1,400 crore was seized on August 3

Officers claimed this is one of the biggest recoveries of MD in the history of ANC and across the world. The last huge consignment—about 1,200 kg—of MD was seized in Russia.

Despite amassing wealth, ANC sources said, Singh lived a simple life. He doesn’t even own a car. He has mostly invested in properties, they said. This year he purchased a 3BHK flat worth Rs 1.6 crore in Dahisar’s (E) most luxurious high-rise, Northern Heights on the Western Express Highway. He also purchased a 1BHK flat in Dahisar’s Enrose Apartment for Rs 50 lakh. He owns two shops worth Rs 3.06 crore at Dahisar apart from ploughing in Rs 35 crore in different investments. He has bought a piece of land worth Rs 5 crore at the Gujarat Industrial Development Corporation in Saykhya. The police have also discovered his flats and shops in Nalasopara and Vasai. “All his properties were thoroughly examined and some of them have been attached as proceeds of crime,” said Nalawade.

ANC said Singh was suspected to be in contact with at least 35 drug dealers. He kept a low profile and only 6-7 people worked under him. “He never trusted anyone and always used to visit personally for deliveries. His modus operandi was that he never provided more than 25 kg of mephedrone to any dealer. At the time of delivery, locations were changed multiple times to ensure that there was no trouble from law-enforcement agencies,” said Nalawade.

Singh would accept only cash before delivery and the money was deposited in his 6 accounts. Some of the cash deposits are above Rs 40 lakh. The cops are surprised that no bank alerted the I-T about it.

Had a copy of NDPS Act

Sources at ANC said Singh was well aware of what he was into and he might land in a mess one day. But the lure of the profit margin always got the better of him. “He also had a copy of the NDPS Act at home and would read it. He was once confronted by his family about the huge money he was earning despite not having any job. He told them that he was into some chemicals which are banned in India,” said an ANC officer. Singh lived with his wife and two children. His son is a BTech and the daughter is a graduate.

How his network was busted

Mumbai’s own Breaking Bad story began unravelling in March following the arrest of Shamshullah Khan, 38, by the Worli unit of ANC. Khan, who was arrested from Shivaji Nagar, Govandi, had 250 grams of MD on him. The cops then nabbed three people, including a woman, from Shivaji Nagar, Palghar, and Ambernath. These three were identified as Ayub Shaikh, 35, Reshma Chandan, 49, and Riyaz Memon, 43. “Technical examination of these accused led us to Singh who turned out to be one of the biggest manufacturers of MD,” said Nalawade.

According to ANC sources, Singh was a difficult nut to crack and remained tight-lipped about the consignment he had parked in his Nalasopara godown. “He even offered Rs 5 crore to the officers in exchange for his release. The officers accepted his offer to win his trust. He then took them to his godown where the cops were stunned to find such a huge consignment of mephedrone. They seized the drug and arrested him.”

The police have also found that Singh has shipped some products to Malaysia, Mauritius and a few other countries but they are not sure if they were drugs.

Mephedrone, or 4-methylmethcathinone, is a synthetic stimulant drug. It has an array of slang including drone, M-CAT, White Magic, meow meow, bubble and yurrpt. The psychoactive drug temporarily enhances mental and physical function, giving the user a high.