Inside story of how Lilavati doctors worked all night to re-attach child's hand that was severed in an elevator accident at her Ulhasnagar home. 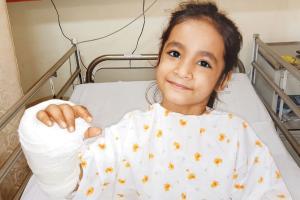 A brave Naira Purswani strikes a cheerful pose after the surgery


On June 15, Naira Purswani, 4, was playing near her home in Ulhasnagar when a recorded voice from the elevator, asking for the door to be shut, caught her attention. As she tried to shut it, her right hand got stuck in the door and was ripped off at the wrist as the lift ascended, ending up on the fourth floor. But, a team of specialists at Lilavati hospital successfully reattached her hand in a 12-hour surgery in the middle of the night.

Naira was playing outside her second-floor home in Ulhasnagar when the incident occurred. She went to the lift door to shut it after hearing the announcement and as soon as her hand reached the inner door, the lift began to move as it was called to the fourth floor. By then, Naira's hand had gotten stuck in the gap between the doors, and the moving elevator pulled it off her arm, leaving her in a pool of blood.

"We were not at home on the day of the incident, so when my mother-in-law called, we thought it might be a minor injury, until we saw her condition. Her right wrist was missing and she was reeling in pain while her clothes were completely drenched in blood," said Kanishka Purswani, her mother. 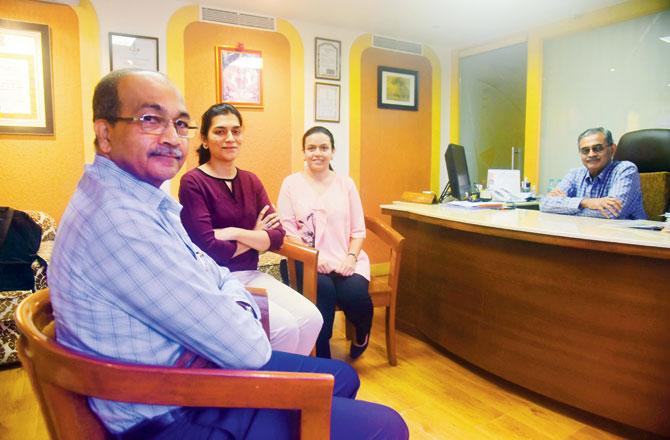 In the ensuing chaos to get medical treatment for Naira, her parents forgot about the missing wrist, until a neighbour enquired about it and suggested they carry the severed part to the hospital. "We were in so much trauma that we had forgotten about the missing wrist. We began looking for it after our neighbour asked us to carry it to the hospital. Another neighbour found it attached in the gap between the grill on the fourth floor," added Kanishka. They packed it in a plastic bag and rushed Naira to a private hospital in Thane.

The Purswanis reached Lilavati hospital around 11.30 pm and by midnight, Naira was wheeled into the operation theatre for the surgery, where a group of specialist orthopaedic and plastic surgeons awaited her. Dr Samir Madhukar Kumta, consultant plastic and reconstruction micro surgeon at the hospital, who headed the team, told mid-day, "She had an unfavourable amputation, where all vital structures like nerves, blood vessels and muscles were avulsed distant to the site of the wrist separation from the rest of her forearm. Since it was the dominant hand of a small child, we decided to go all out to save the limb, although the chances of survival looked bleak because of the severe damage to the avulsed structures."

The situation ceased to remain as bleak at the end of a gruelling 12-hour surgery, when the team managed to save her hand. Naira is the youngest patient to undergo a hand replant the hospital. The surgery was extremely complicated as it required fixing the bone, joining tendons that move the thumb and fingers, joining major nerves that carry sensations from the hand and transmit signals from the brain to the various muscles in the hand, as well as joining major arteries and veins to restore blood supply to the hand.

"Joining these structures in a child is very challenging and requires the use of an operating microscope and a team of surgeons experienced in microsurgery," informed Dr Leena Jain, consultant plastic and reconstruction micro surgeon at the hospital, adding, "After this superhuman effort, the hand was successfully replanted. Since a circular band of skin around the wrist was badly damaged and needed to be removed, she needed a cover of skin and soft tissue for this area. That surgery was deferred for a later date, after we were sure that the hand had survived," Dr Sudhir Warrier, a consultant orthopaedic and hand surgeon helped attach the bone to the severed hand.
"This was also a very challenging and delicate super microsurgical procedure, which required the joining of blood vessels smaller than 1 mm in diameter, using sutures finer than hair and special instruments," added Dr Jain.

Microsurgery is a sub-specialty of plastic surgery which utilises an advanced microscope and specialised precision tools to magnify and link small blood vessels. Under the microscope at Lilavati, the experts linked the tiny arteries, nerves, tendons and veins of Naira to her the hand.

The reattached hand was doing well for the first seven days, but on the eighth day, it turned cold and blue. The nursing team immediately informed doctors and the child was taken for surgery again. During the operation, the veins on the back of her hand were found to be blocked. They had been severely damaged at the time of the injury and a clot had formed inside them, blocking the flow of blood. The veins were repaired once again by using additional veins from her leg. Subsequently, Naira went through another major microsurgical procedure, where muscle from her thigh was taken and transferred to the wrist to cover the area of skin and soft tissue loss.

"When her wrist was brought to the hospital, it was pale, but after the operation, it became viable [turned pink] which helped us understand that the surgery was successful," said Dr Jain. While Naira recovers, the hospital, under its in-house Save the Girl Child scheme is trying to provide a concession. The discounted medical bill is over R10 lakh, of which the Purswanis have paid R5 lakh.

Ashok Purswani, Naira's father, who works at a jewellery shop where he makes bangles, said, "We never imagined that the doctors would be able to attach the wrist. But now, she would be able to write again with her right hand. However, we know she would need a few more surgeries before that happens."