Andheri kidnap case: ‘I feel as if I’ve finally woken up from my nightmare’

Pooja Gaud, reunited with her family nine-and-a-half years after she was kidnapped by a couple, says she wants to forget her traumatising past and start afresh 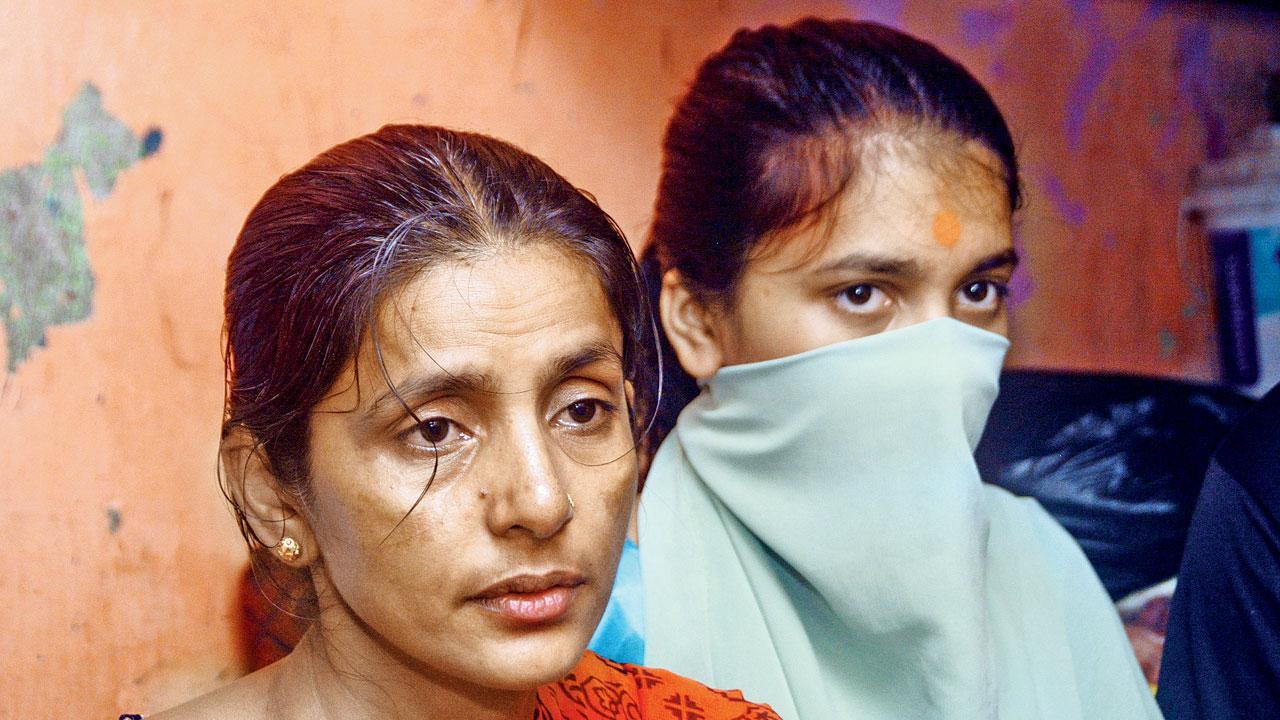 Pooja Gaud, 16, with her mum Poonam at their home at Area No. 4, Gilbert Hill. Pic/Satej Shinde


At Area No. 4, not too far away from the towering Gilbert Hill in Andheri West, there’s a flurry of activity. Residents are seen crowding outside a shanty at the mouth of the gully, which is also home to a masjid, piqued by the developments that have taken place in the last 24 hours.

Sixteen-year-old Pooja Gaud, who we are here to meet, is dressed in a sky blue salwaar kameez, and seated on the only bed in the tiny room, right below the frame of Lord Hanuman. Her face doesn’t reveal any emotion—that she has covered herself partially with a dupatta, makes it all the more difficult for us to comprehend how she is feeling. That is until she starts speaking. “I feel as if I had a nightmare and now, I have finally woken up and found my mother. I know these years I spent away from my family will never return. But I just want to forget everything and start afresh,” she tells us.

Also read: Mumbai: Kidnapped and raised 200m from her home 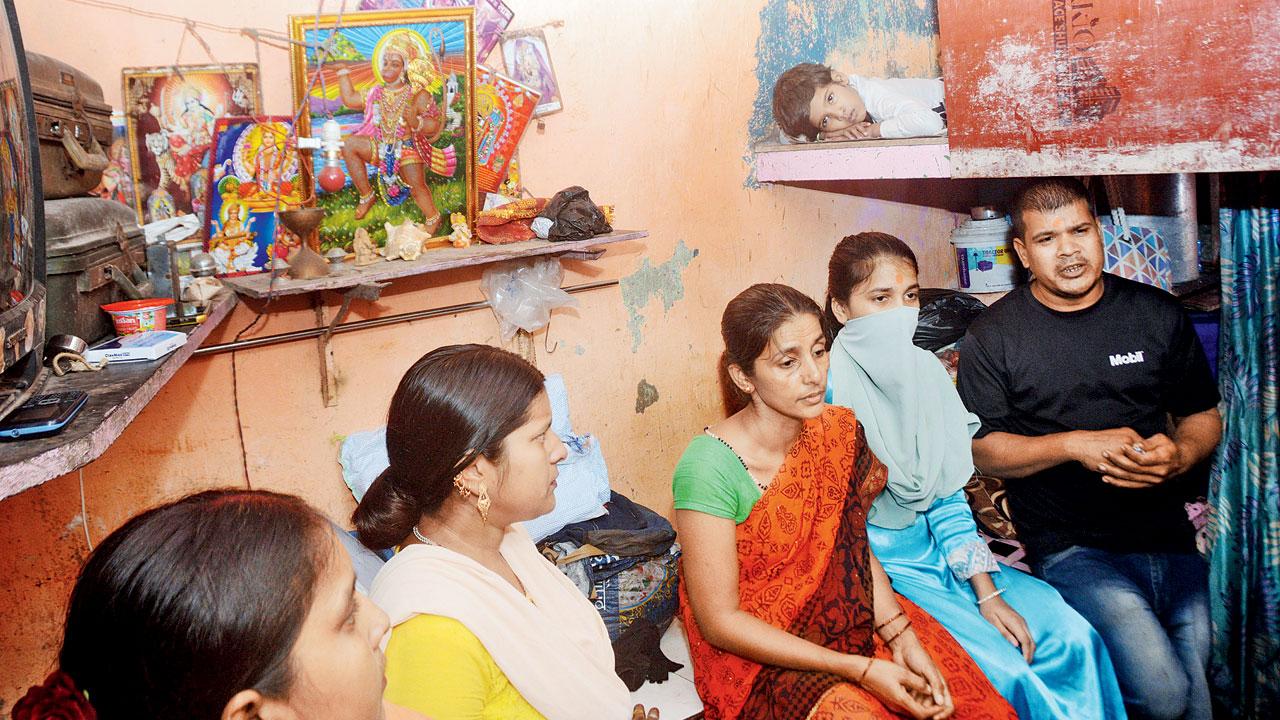 Pooja Gaud, 16, with her family inside their shanty at Area No. 4, Gilbert Hill. Pic/Satej Shinde

Pooja was reunited with her mum and two brothers on Friday, nine-and-a-half years after she was first kidnapped by a couple from near her school. Her mother, Poonam, who is seated next to her, seems to be experiencing a multitude of emotions. Breaking into tears every now and then, she confesses that her life came undone after her daughter went missing. She lost her husband to cancer in April this year. His dying wish was to meet his daughter—one that she tells us remained unfulfilled in his lifetime.

Her elder brother, Rohit, 19, who dropped out of school after Class X, and works as a mechanic, has never stopped blaming himself for what happened on the morning of January 22, 2013, the day Pooja went missing. “My sister and I would always go to school together.

On that day, I lost sight of her as soon as we entered the school gate. I assumed she was walking behind me, and went into my classroom.” Pooja was only in Class II then. “A few hours later, her teacher came to my class, and enquired about her. When I told her that Pooja and I came to school together, she got worried, and informed my father. My family then rushed to the school and started looking for her everywhere. By evening, we decided to file a police complaint.”

Unbeknownst to the family, Pooja had been accosted by a couple, Harry Joseph D’Souza,  50, and his wife Soni D’Souza, 38, who spotted her loitering around her school. The couple lured the girl by offering to buy her chocolates and ice cream. “I was blinded by their offer and had no idea that it was a trap and that I would never see my family again,” she recalls. “They told me that they would drop me home after I finished eating the chocolates. I can never forget that night. I kept asking them when they’d drop me home as I was missing my mother. They threatened to throw me down the hill.”

According to Pooja, who was christened Annie by the couple, she was first taken to Haji Malang in Kalyan. A few months later, the couple took her to Goa. “We lived in Goa for a day, after which they admitted me into a boarding school in Raichur in Karnataka, where I lived for a year. They got me back to Mumbai in 2014.” Till 2017, the family lived in a rented home in Vile Parle, before they moved to Dhangar wadi in Andheri West, which is barely three minutes away from her parent’s home.

Pooja says the couple started misbehaving with her after their child was born. “They made me do all household work. They told me I have to work and earn money to support the family. I was made to do multiple part-time jobs, as domestic help and babysitter.” The young girl says that though she had expressed a desire to study, the couple didn’t let her go to school. “They handed me old books and asked me to read those instead.”

Pooja had almost given up hope of meeting her family, and accepted her fate until a few months ago, when Soni beat her up. Pooja shared her problems with Pramila Devendra, who worked with her as a domestic help in Juhu. In mid-day’s August 6 report, Pooja mentioned how Devendra had managed to trace an old missing person’s poster from the Internet, which had the contact number of one of the neighbours, Mohammad Rafiq Shaikh, who is known to the Gauds. The Gauds immediately alerted the police, who acted swiftly and sent a team to the apartment in Juhu from where the calls were made. They brought Pooja to the police station.

Both Pooja’s mother and her uncle are hawkers selling sprouts in Andheri for a living. The family has no steady income. “Life has been very cruel to me,” Pooja’s mother tells mid-day. “After my daughter when missing I lost my mother-in-law. In April this year, my husband died too. I have no steady source of income. I am happy that I found my daughter, but, her father is no more. I don’t know how I will plan the future of my three children all alone.”

Poonam’s husband was diagnosed with cancer, after which his tongue was amputated. He couldn’t speak for two years. “He would point to her photograph and assure me that she would return home someday. That gave me hope,” a teary-eyed Poonam shares. Pooja’s uncle Vinod Gaud, said that he wants to pursue the case till the end and will ensure that the D’Souzas are punished for the crime. “They beat her up mercilessly. Pooja is still complaining of pain in her chest and nose,” he says.

On Saturday, Pooja along with her mother and uncle visited the Mumbai Police Commissioner Vivek Phansalkar. On their way back, the family took her to Siddhivinayak temple. “We are thankful to god that our girl is now safe and back with us,” said Poonam. Phansalkar said, “Taking cue from this we are planning to start a special drive to trace the all those missing children who got separated from their families  and are now working at houses or in shops.”

Rajendra Bhosale, a retired assistant sub-inspector (ASI), worked in the missing unit of DN Nagar police station, when Pooja went missing. During his tenure from 2011 to 2015, Pooja’s case was the only one that remained to be solved. The former police, however, remained persistent and continued to look for leads even after his retirement.  “I used to carry her photograph in my wallet, and would try to look for her while attending festivals or fairs, in and around Mumbai,” says Bhosale, who admits that he is finally at peace.

2013
Year when Pooja Gaud was kidnapped

Next Story : Maharashtra: Tempo driver injured in firing during robbery bid in Thane