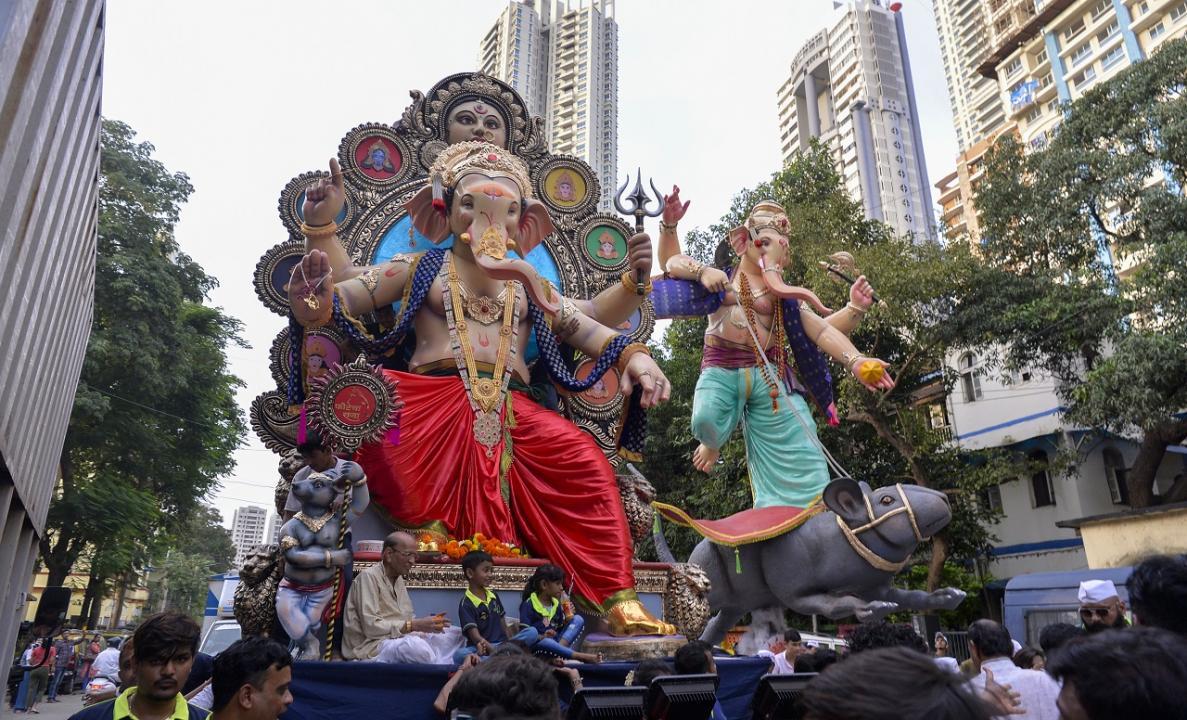 Devotees walk alongside Lord Ganesha idols through a street ahead of the Ganesh Chaturthi festival in Mumbai. Pic/AFP


With no Covid restrictions this year, famous Ganesh mandals across Mumbai are getting ready to celebrate Ganeshotsav with zeal and enthusiasm. To make up for the lost years due to the pandemic, this year’s Ganeshotsav, commencing on August 31, promises to be a larger affair.

“We ensure that everyone gets darshan of Lalbaugcha Raja. The mandal has set up big mandaps for people coming for darshan. We have made sitting arrangements for senior citizens and children. There is 24-hour water available for visitors and we also serve tea and biscuits from time to time. For security purposes, we have installed CCTV cameras and metal detectors. Around 3,500-4,000 karyakartas (volunteers) are working around the clock. Even police personnel and BMC officials help us during Ganeshotsav,” shared Kamble.

Founded in 1934, Lalbaugcha Raja Sarvajanik Mandal completes 89 years this year and is expecting more visitors this year as the state government has lifted Covid restrictions. “With no restrictions, the celebrations will take place as they used to before the pandemic. We are expecting a huge footfall this year too. Keeping that in mind we have already prepared ourselves,” he added.

This year Lalbaugcha Raja will be in his regal pose on a throne in his 12-ft form.

The theme for this year is the Ayodhya Ram temple. Well-known art director Nitin Chandrakant Desai is giving shape to the decorations at Lalbaughcha Raja. “At the entrance, there will be a Ram mandir with Lord Ram’s idol. We will also have a replica of the dome of the Ayodhya temple,” Kamble said.

Meanwhile, speaking about how the pandemic affected the mandal, he said: “Every year, lakhs of people from different walks of life wait in anticipation for the darshan. It is their devotion to the Raja that draws them to Lalbaug year after year.”

“Over the years, the mandal has not only succeeded in popularizing the tremendously famous Lalbaugchga Raja but has also tried to better society by working towards providing facilities to the underprivileged. The Lalbaugchga Raja is known to everyone. However, we also wish to highlight the social activities performed by the mandal under the name of the same. Lalbaugcha Raja Sarvajanik Ganeshotsav Mandal is carrying out numerous social and educational activities. Some activities include Dialysis Center, Computer Training Institute, Free Yoga Centre, Library, Competitive Exam Counseling Center and Guidance Classes, and many more. This is possible due to the immense love of people towards Lalbaugcha Raja. Devotees donate generously every year and we make sure that these donations are used towards the welfare of people. But during the two years of the pandemic, we received a huge financial setback. We lost around Rs 20-22 crore. But we used our Mandal’s savings to conduct social activities,” he added.

Just a few lanes away from Lalbaugcha Raja is the popular Mumbaicha Raja in Ganesh Galli. The Mandal is known for their amazing themes every year that mostly replicate famous places in India.

Founded in 1928, Lalbaug Sarvajanik Utsav Mandal is completing 95 years this year. “The mandal was founded in the pre-Independence era, during the freedom struggle. During that time, the mandal did a lot of public awareness through decorations during Ganeshotsav,” Adhvait Pedhamkar, joint secretary of the mandal, said.

“In 1977, Lalbaug Sarvajanik Utsav Mandal celebrated 50 years during which Dinanath Veling suggested we make a 22-feet Lord Ganesha idol. The Mandal back then accepted the proposal and we were the first to make a 22-feet Ganesha idol. Since then we have continued the tradition of the 22-feet idol,” he added.

Speaking about two years of the pandemic, Adhvait said, “Due to Covid-induced restrictions we kept our pooja murti (three-feet idol), and there was no utsav murti (22-feet idol).”

Explaining how the Mandal is lavishly celebrating Ganeshotsav this year, he said: “We all are excited to celebrate it grandly after a two-year break. Though there are no restrictions, the mandal will take all necessary precautions. We won’t stop devotees from taking the darshan of Mumbaicha Raja, but follow all precautions necessary to take care of the devotees. Our mandal has never faced crowding problems or mishaps have ever happened during Ganeshotsav. Every year our mandal wins awards for the most disciplined mandal from the police. We follow this every year with discipline and precaution.”

Speaking about the theme this year, Adhvait Pedhamkar said the Mandal has planned to replicate Varanasi’s famous Kashi Vishwanath temple.

Explaining how the mandal plans to follow regulations keeping Covid-19 in mind, he said, “We can only tell people who are in mandal’s periphery or boundaries. We can’t ask them to follow them outside. We will ask them not to create a large crowd. Our volunteers will be there to guide people and monitor the pandal all the time.”

Speaking about how the two-year break to Ganeshotsav affected the Mandal, Advait said, “The excitement level was less but this year it’s double. Financially, it did affect the mandal. There were no sponsors and we did conduct social activities for the last two years. We helped during the Mahad floods, and during the pandemic, we distributed grains and masks. We also held blood donation camps.”

Another well-known Ganesh pandal is Girgaon Cha Raja, which is a 25-feet eco-friendly idol. In 2018, Prime Minister Narendra Modi had also given a shout out to the Mandal in his Maan Ki Baat. “We are proud of the Girgaon Cha Raja Mandal that they are bringing an eco-friendly Ganpati,” he had said.

Talking about Girgaon Cha Raja, Ganesh Lingayat, secretary, Nikadwari Lane Sarvajanik Shree Ganeshotsav Mandal, said, "The mandal was established in 1928. This year, the mandal has completed 95 years. The 25-feet tall Ganesh idol is made from shadu (clay). Not just Ganeshotsav but the mandal also participates in various social activities like helping people from flood-affected areas. We have also been carrying out social activities like education and medical assistance, blood donation camps."

With no restrictions this year, Nikadwari Lane Sarvajanik Shree Ganeshotsav Mandal is planning to celebrate the festival in a big manner. "We are excited. Ganeshotsav will be celebrated with zest and zeal like it was before the pandemic," Ganesh Lingayat said.

Speaking about this year's theme, Lingayat said, "We have been celebrating eco-friendly Ganeshotsav for the last 95 years. Since it's the 95th year, we will showcase 95 deeds through which people can save the environment. For example, switching off lights at home for a few minutes, closing running water taps, etc. We will give them solutions on how to save the environment. The theme has been designed by Sumit Patil."

Speaking about how the pandemic affected the Mandal, Lingayat said, "The pandemic had a huge impact on us financially. We lost around Rs 55-60 lakh in the last two years. With no donations or sponsors, it was difficult because we still celebrated the festival. During Covid-19, we distributed masks in hospitals and police stations in South Mumbai. We used our mandal's savings for all the activities we did in the past two years."