And Vernon’s letters to his son

Of the 27 years of his son’s life, Vernon Gonsalves has been in jail for 10. Then how did they communicate? Through letters, comic strip cut outs from newspapers, birthday cards and the occasional prison visits 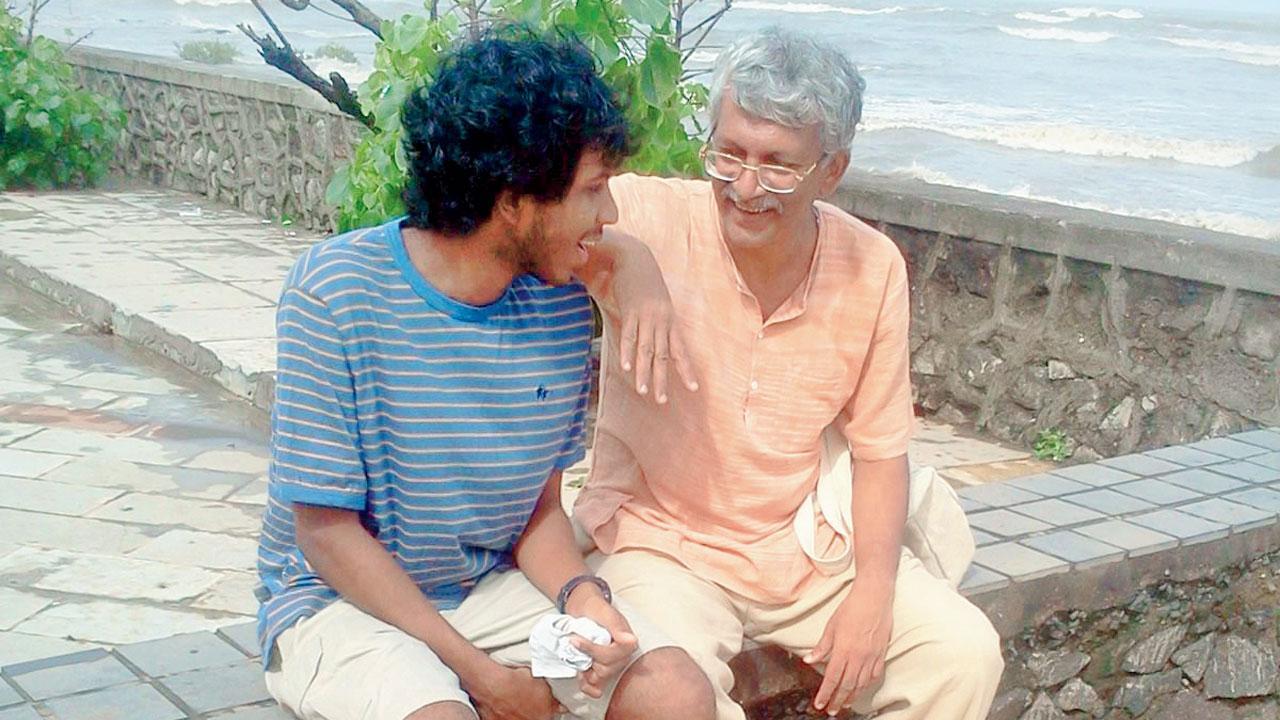 Vernon and Sagar Gonsalves share a laugh at a beach. Pic/Facebook

Sagar worked for six years in the NGO sector before he flew last year to London to do a Master’s at the School of Oriental and African Studies. Twenty-seven now, he is busy writing his dissertation on sedition under British colonial rule. You would chuckle at Sagar’s choice of topic once you know he is the son of lawyer Susan Abraham and Vernon Gonsalves, who was arrested on August 28, 2018, under the Unlawful Activities (Prevention) Act for his alleged role in the violence at Bhima Koregaon.

The story of the Gonsalves family is a Sisyphean tragedy. Vernon was first arrested on August 19, 2007, for joining the Naxalites in their war against the Indian state. Out of the 19 cases filed against him, he was acquitted in 17; he has gone in appeal in one case and the 19th one is pending. Vernon was released in June 2013. In effect, Vernon will now be tried for more or less the same charges that the judiciary quashed in 2013.

Just how many times a person must be tried for an imagined offence before the state stops harassing him!

Think about Sagar: Out of the 27 years of his life, his father was in jail for 10 years and counting. These years of Vernon’s absence weigh heavier because he had scarcely been a permanent presence in Sagar’s childhood. In 1994, the year in which Sagar was born, Vernon shifted from Chandrapur to Nashik, organising workers in the informal sector to fight for their rights. Susan took up the responsibility of bringing up Sagar in Mumbai.

Vernon would visit them once a month or so. He would take Sagar to Pinky Cinema for films, and then to an adjoining café, where he would tell him stories, crack jokes, shoot the breeze, rib him for being overweight—and also laugh at his own paunch. He would buy him Amar Chitra Katha comics on historical personages.

In 2005, pushing 50, Vernon decided to make Mumbai his home, drifting into a regular middle-class existence until it was disrupted at 12.30 am, August 19, 2007. At that hour, from the window of their apartment in Andheri, Sagar saw his father with a bunch of men.

When the door was opened, they saw Vernon in handcuffs, with a police posse in tow.

Sagar, then in Standard VIII, saw his dad taken to the bedroom, and mom banished to the living room. The cops flipped through books, searched the cupboards and drawers. He saw a pistol on the bed. And when Susan spoke up, they threatened to take her in as well. He overheard his dad say to the police that in case they wanted to do an encounter, they could go ahead. At 3.30 am, overwhelmed by sleep, he asked dad to wake him up before he left. Later, Sagar came to know that Vernon had been abducted off the road many hours earlier, bundled into a car, driven around the city with his head in a hood, and taken to some place where he was beaten up.

Let us not ask: Who terrorises whom in India?

Vernon was not around when Sagar woke up the next morning. “You would get him out soon, wouldn’t you?” he asked Susan, breaking down.

The son-father relationship was now confined to the letters they exchanged. Vernon would send him comic strips cut out from newspapers; he made birthday cards for his son. Every letter ended with questions on trivia. Time passed. Sagar now had girlfriend problems. In his second year in college, Sagar went to meet Vernon at Nagpur Central Jail, and spoke for 20 minutes about his broken heart as his girlfriend had called off their relationship. Later, Vernon wrote back, “You should think of having her as your friend.”

She is among Sagar’s closest friends now.

In 2013, Vernon was out of jail. The Congress government in the state had made him suffer. From 2014, the Bharatiya Janata Party began to rule both Maharashtra and India. Vernon was arrested for the second time in 2018. Hardened by his earlier experiences and being politically mature now, the state’s blow did not traumatise Sagar. The suffering of the Gonsalves family under two regimes testifies to the Indian state’s class character.

Once again, letters defined the contours of the father-son relationship, akin to the Jawaharlal Nehru-Indira Gandhi bond. Letters from a Father to his Daughter to letters from a father to his son, the Indian state has not been cured of its paranoia for nearly a century.

For his dissertation, Sagar pored over the Constituent Assembly debate on sedition. He said many members favoured retaining the sedition law as they thought the state, now under the control of Indians, would not, unlike the foreign rulers, use it to oppress the Indian people. Sagar spoke of how the courts during the colonial era widened the scope of the sedition law.

Next Story : This land is your land too...