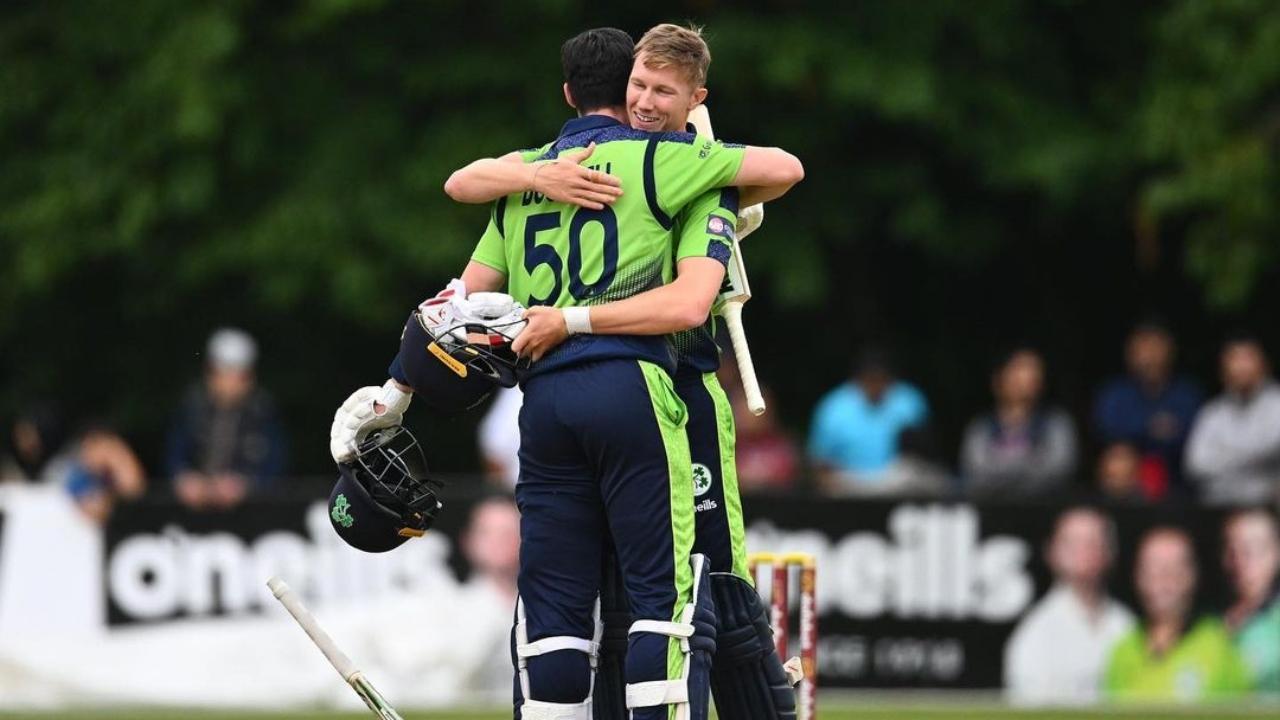 
Ireland sealed the five-match T20I series against Afghanistan with a thrilling, rain-affected seven-wicket win in the decider match at Stormont.

After winning the toss and electing to bowl first, Ireland had an excellent start, thanks to an opening burst from Player of the Match, pacer Mark Adair.

After a quiet first over from Josh Little, Hazratullah Zazai looked to have got Afghanistan moving with two consecutive boundaries, the first streakily skewed past point, and the second smoked through the covers.

However, Adair struck back, enticing the explosive opener to miscue high into the air, with Simi Singh taking the catch at mid-off. Three balls later, he claimed another, Rahmanullah Gurbaz poking outside off and edging through to the keeper.

Little snuck through a second quiet over before Adair struck again, once more hitting back after a first-ball boundary. This time he was cut through point by Ibrahim Zadran before bouncing out the No.3, a cue-end flying to short third man, where Barry McCarthy claimed an excellent diving catch.

Afghanistan found themselves 26-3 after four overs and took their time to rebuild. The ball only reached the fence once in the next five overs, and that came courtesy of an overthrow reaching the boundary. With nine overs gone, Afghanistan were 42-3, scoring at a tick over 4.5 runs per over.

The tourists changed tack as Simi Singh was introduced, with Usman Ghani, previously becalmed on eight off 21, smashing 20 runs off the 10th over of the innings, with a pair each of fours and sixes giving Afghanistan a much-needed boost.

Andrew Balbirnie turned to Little in pursuit of a breakthrough, and the left-armer obliged. Two short balls dismissed Najibullah Zadran and Mohammad Nabi in the space of two balls, with Lorcan Tucker completing the catches on both occasions. The second was a special effort, with the keeper running forward and taking a one-handed grab inches from the turf to see off the Afghanistan captain.

Also Read: Someone will have to make a 'personal sacrifice' for KL Rahul to open in Zimbabwe series: Manjrekar

Once again Afghanistan rebuilt, putting on 29 in the next four overs to lay the platform for the last five overs. However, it was at this point that the rain fell, and with the score reading 95-5.

It left Ireland needing 56 runs in seven overs for a series win. Mujeeb Ur Rahman immediately created an impact as he trapped Andrew Balbirnie lbw, and conceded just six runs from the third over.

Rashid Khan was introduced and tempted Paul Stirling with a tossed-up delivery. The opener took the bait, but successfully so, smashing high over long-on. When Lorcan Tucker shuffled and smashed the first ball of Mujeeb's next over up and over the leg-side.

But the dismissal of Stirling brought Afghanistan back into the match. He holed out off Mujeeb, having become the fourth man in history to the milestone of 3,000 T20I runs.

Harry Tector punched his first ball, a low full toss, through the covers for four, to ease the Irish nerves but the dismissal of Tucker, mistiming a slog sweep off Rashid, put the game back in the balance.

Some ones and twos brought the requirement down to five needed from four. Ireland eventually won the match and series as a sweetly timed George Dockrell pull shot found the fence, making the result a foregone conclusion.

Dockrell was named Player of the Series for his unbeaten batting exploits having scored 141 runs across five innings without being dismissed.

Next Story : Dubai Capitals sign Powell, Mujeeb, Chameera amongst others for ILT20