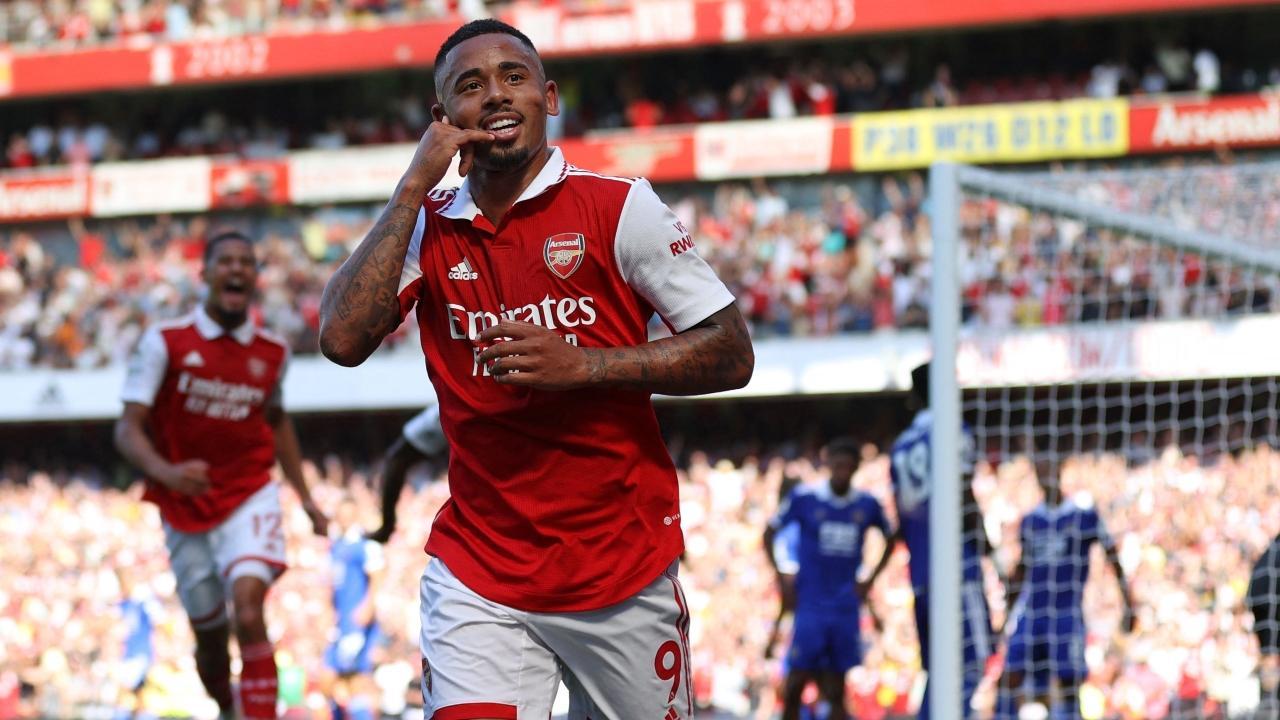 Gabriel Jesus celebrates after scoring their second goal during the PL football match between Arsenal and Leicester City. Pic/ AFP


Gabriel Jesus didn't take long to make an impression at the Emirates stadium. The Brazil striker marked his home debut for Arsenal with two goals and two assists in a 4-2 win against Leicester in the Premier League on Saturday.

Jesus, who joined from Manchester City as Arsenal's marquee summer signing so far, opened his account for the Gunners in the 23rd minute with a brilliant, curling finish. He got his second in the 35th from a header and had several chances to finish the game at Emirates Stadium with a hat trick.

The two times Leicester found itself back in the match, Arsenal responded right away.

The visitors made it 2-1 from an own goal by William Saliba in the 53rd, but Arsenal midfielder Granit Xhaka restored the home side's two-goal cushion two minutes later. Xhaka scored after Jesus poked a loose ball into his path after Leicester goalkeeper Danny Ward failed to hold on to a routine cross into the box and collided with defender Wesley Fofana.

Leicester attacking midfielder James Maddison made it 3-2 in the 74th when he sent a low shot through the legs of Arsenal goalkeeper Aaron Ramsdale.

A nervous murmur went through the crowd, but the Arsenal team didn't panic as it did in similar situations in recent seasons. Jesus drove forward just a minute later and squared the ball to forward Gabriel Martinelli, who fired a left-footed shot from just outside the area to beat Ward at the back post to make it 4-2.

Also Read: Premier League: Gerrard wins duel with Lampard to get Aston Villa off the mark

Leicester also had a penalty decision overturned just before halftime after the referee first pointed to the spot and then was asked to review a coming together of Ramsdale and Leicester forward Jamie Vardy in the box.

On a hot day when the mercury hit around 33 C (91 F), six goals and the pace of the game took a lot out of the players and water breaks were needed in each half. The result means that Arsenal has won both of its opening league games, with Leicester drawing its first match.

Jesus was the focus of Arsenal's attack throughout the match, with teammates trying to get him the ball at every opportunity. For his first goal, he took one touch after receiving a pass from Xhaka, set himself and then bent a shot that took a slight deflection to sail in past Ward.

Jesus got a bit of help for his second from Vardy. The Leicester forward flicked the ball backward across the face of goal from a corner, and Jesus headed into an empty net at the back post.

The striker nearly scored a hat trick before halftime when he dominated Leicester defender Jonny Evans with his back to goal, spun around him into the box and fired a low shot saved by Ward. He had multiple chances in the second half as well.

Unlike Arsenal, Leicester has been very quiet in the transfer market. The team only announced its first signing of the transfer window on the eve of Saturday's match. Alex Smithies, a 32-year-old backup goalkeeper who most recently played for Cardiff, signed with the Foxes on a two-year deal.