‘I was put on HIV children’s meds due to shortage’ 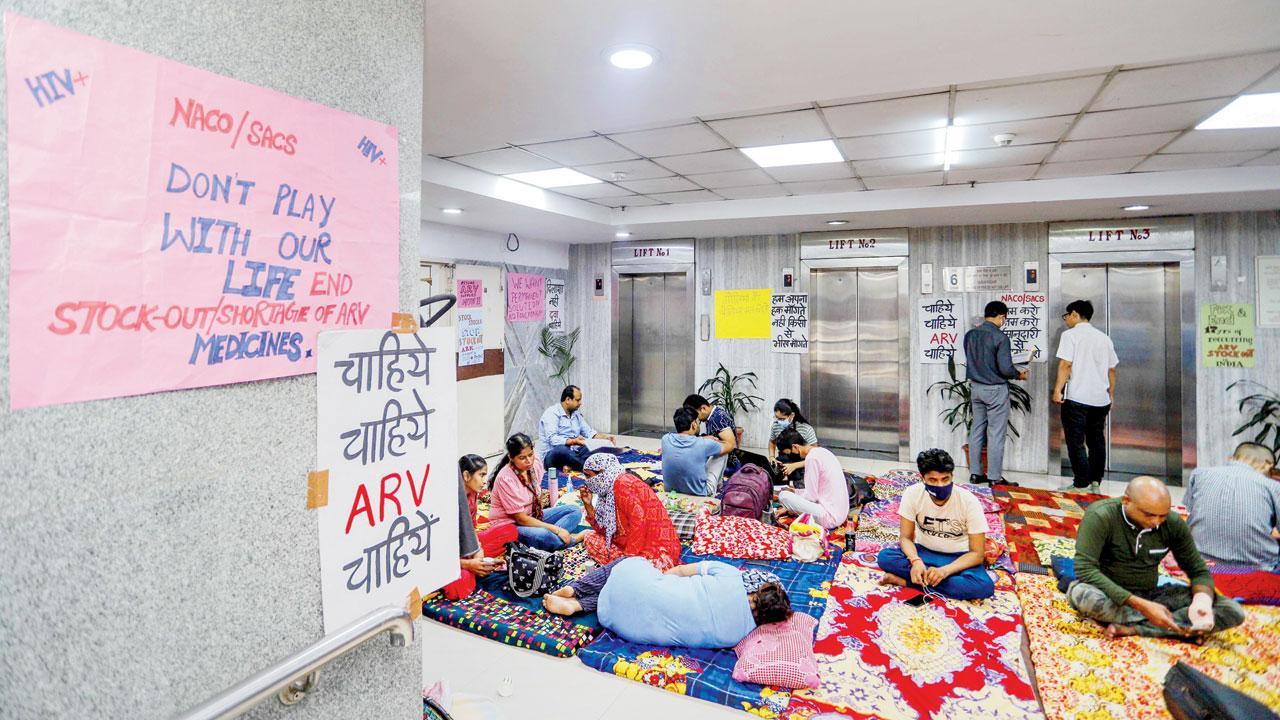 Activists and AIDS patients outside NACO’s Delhi office last week, where they have been on an indefinite protest since July 21 against the stock-out of HIV drugs since. Life-saving drugs for people living with HIV have been in short supply in the country since March this year. PIC/NISHAD ALAM


Nagpur resident Ashok* was diagnosed with HIV/AIDS back in 2006. The 53-year-old has been on the second line of treatment ever since; that’s one stage away from seeking the final line of treatment. For the longest time, he was receiving a cumulative stock of medicines that would last him three months from the Anti-Retroviral Therapy (ART) based in Mumbai, where he lived before the Covid-19 pandemic struck. Financial constraints forced him to return to Nagpur. Ashok was only just beginning to get his life back in order, when the shortage of HIV/AIDS drugs—Antiretroviral (ARV) drugs—that the country is currently reeling under, pulled the plug on his treatment. 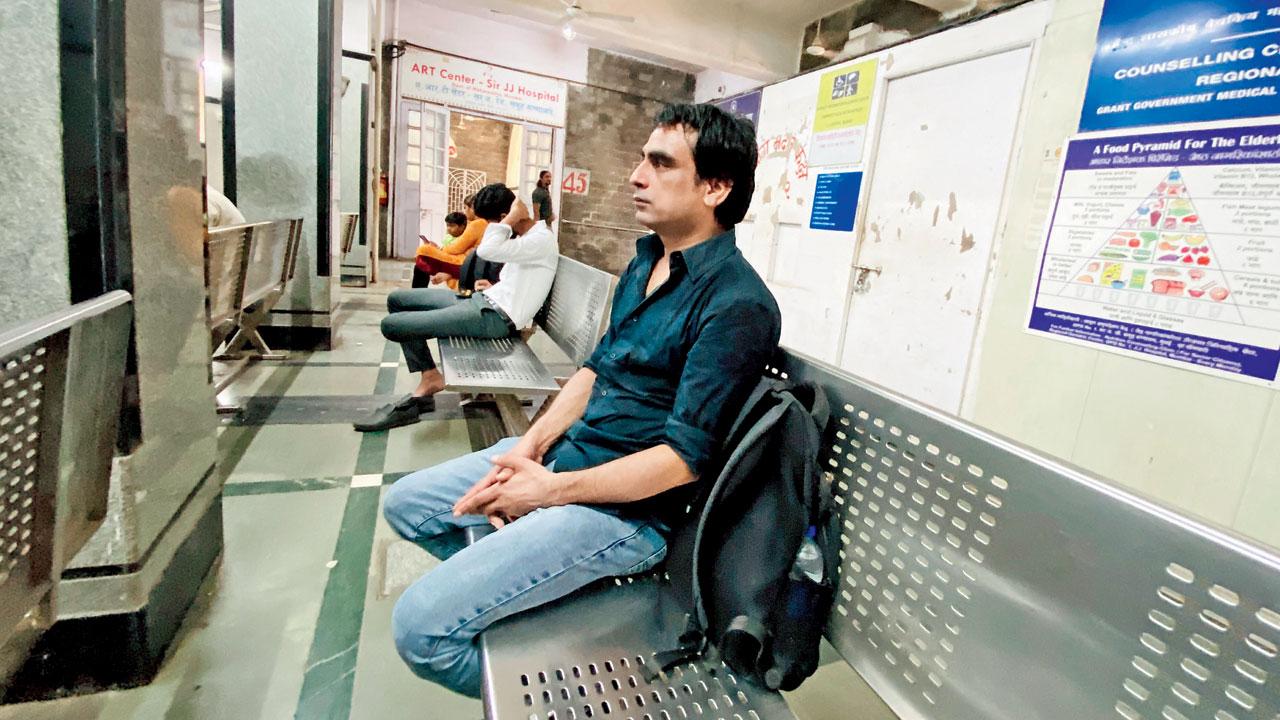 Since February this year, Ashok has been receiving only 15 days’ stock, which he is sometimes forced to use for as long as 45 days. This means, cutting down on his daily dose or taking the pills on alternate days—a practice, experts advise against, as it could affect the drug’s capability. “The HIV drug shortage is omnipresent, including in Maharashtra. There seems to be no dependable assurance from NACO [National AIDS Control Organisation] on replenishment of the stocks. Patients are confused, out of drugs and demanding that they be treated as humans,” says Mumbai-based HIV/AIDS activist Ganesh Acharya. Acharya was diagnosed with the condition in 1999, and has been actively working in the circle ever since. 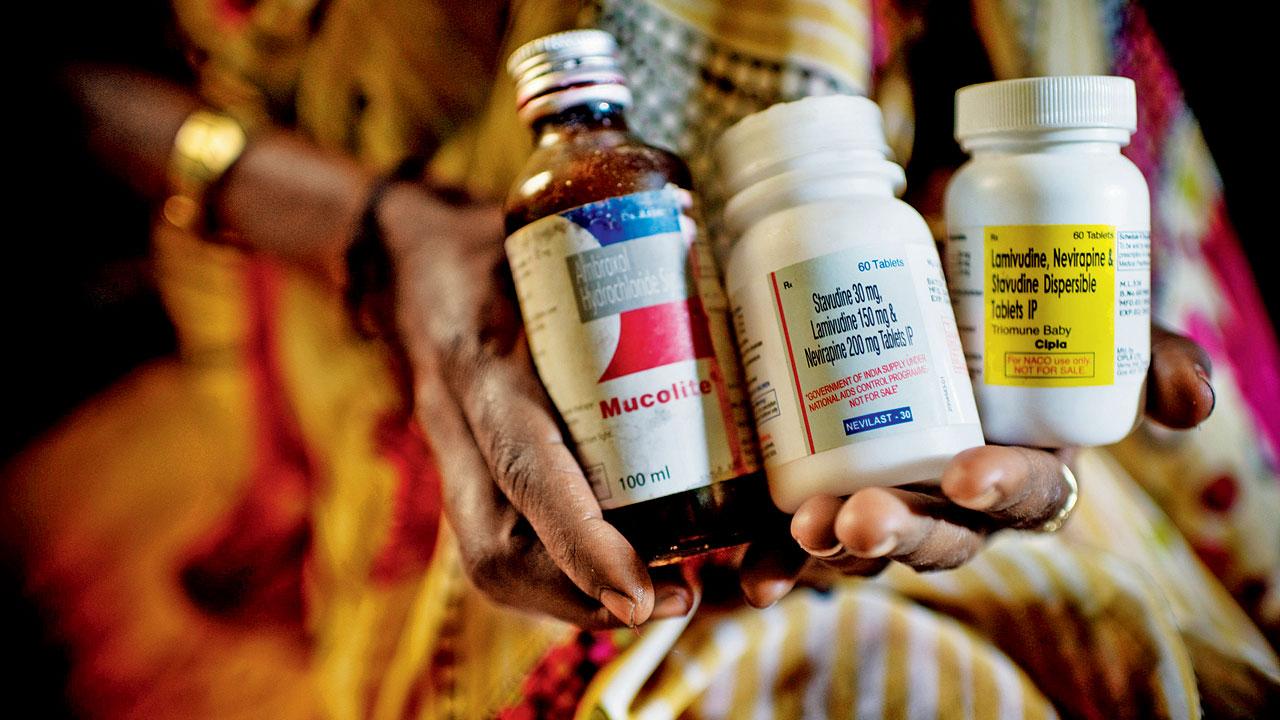 Lives saving ARV drugs for HIV/AIDS patients have been running short in the country at varying degrees. The drugs are important line of treatment for the patients, some of whom are in their final line of treatment—after which there is no cure. Shortage of drugs can lead to health complications

Ashok has been in touch with Acharya ever since he was told by the ART centre in Mumbai that he would be handed a limited stock of his combination medicines, since he also suffered from liver and kidney conditions. “He was asked to purchase the remaining from the open market, which he was unable to do due to lack of funds. This continued from February till May,” Acharya says. Ashok was finally put on medicines meant for children with HIV. The only way out was to double his daily dosage to suit an adult body. When that too wasn’t sufficiently available, Ashok was provided 15 days of medicines and made to follow an alternate-day regimen. 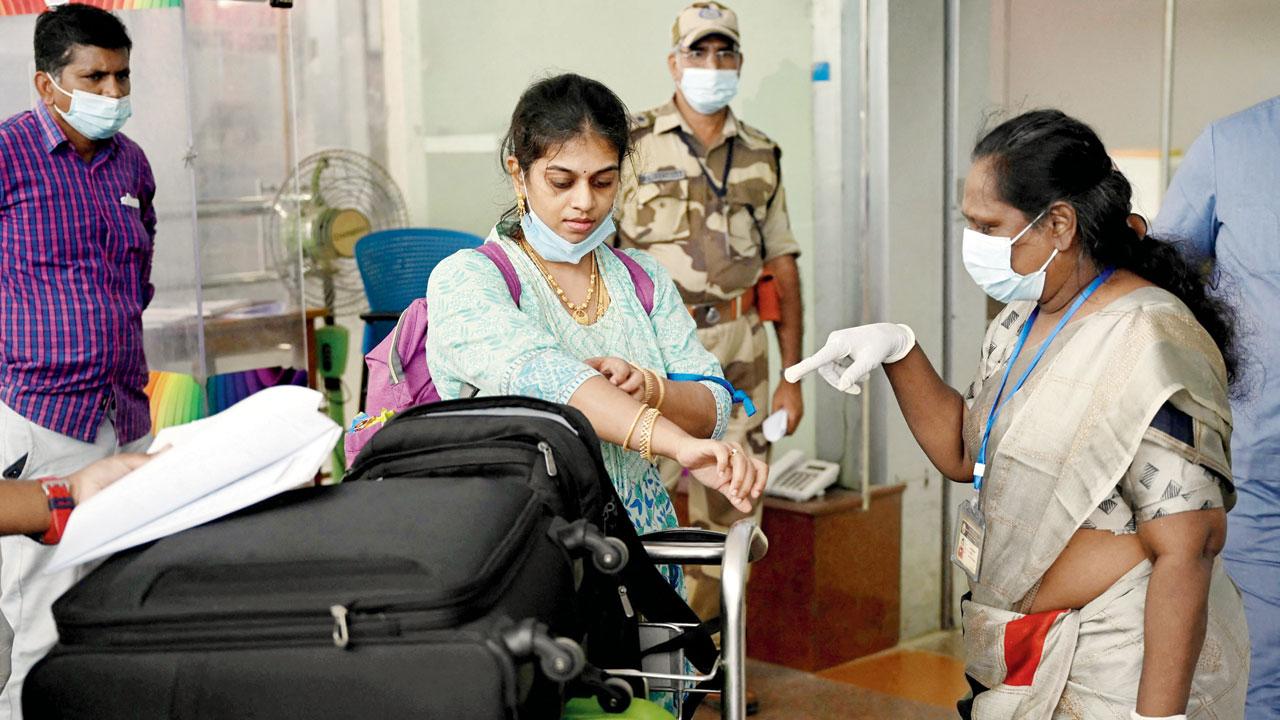 HIV/AIDS patients have had to stand in multiple queues, travel long distances and battle health issues to get their medicines from government run ART centres. Due to the shortage of drugs, they have been provided with drugs for days lesser than the stipulated time of minimum one month

There are about 100 ART centres in Maharashtra, of which 25 are in Mumbai. The remaining 75 are spread across the state. The shortage of ARV drugs began back in December 2021, when NACO had to halt the supply of certain ARV drugs because of a slack in the procurement process.

Activist Hari Shankar, also an AIDS patient, has been on an indefinite strike against the shortage at the NACO office in Delhi’s Janpath area since July 21. He claims the shortage arose after NACO gave the tender to a blacklisted firm. “The problem in Delhi started in March 2022. Nationally, there is a shortage and stock-out of Dolutegravir (DTG) 50 mg, paediatric medicine, second and third line ARV. The issue has been brought to the notice of NACO and State AIDS Prevention and Control Societies [SACS] by Delhi Network of Positive People [DNP+] and other organisations, but the situation remains the same,” Shankar told mid-day from Delhi.

Struggling with AIDS since 2002, Shankar bears the additional burden of diabetes, high cholesterol and hypertension. He, along with other AIDS patients, have been camping outside the NACO office on the sixth floor of Delhi’s Chandralok building, where mattresses have been laid out on the floor. On August 2, Shankar fell ill at the protest site. He had to be put on intravenous saline after complaining of nausea and dizziness. Despite his condition, he has refused to budge.

He told mid-day over a telephone call, “NACO and SACS are providing medicines for less than a week to patients who should be given supplies for a month at least. Patients have to bear the cost of travelling [to their respective ART centre], which not many can afford. Many patients are daily wagers, who cannot take repeated leave from their employers. Not many are open and comfortable about their status as AIDS patients, which adds to the problem.”

Twenty-year-old Haryana resident Shama* has to travel at least three times a month to the ART centre in Delhi to procure her drugs. A college student, Shama learnt she had HIV when she was a teenager, soon after her father died due to HIV/AIDS in 2007. Her mother, a social worker, was also diagnosed with the condition around the same time. She told mid-day that with barely any income in sight, it costs the family around Rs 400-R500 a day to travel to the ART centre. “It takes four hours for my daughter to reach the centre. Some days, it is by bus and at other times, she has to take the auto. She is a college student, so taking leave is an issue, since she doesn’t want her friends or teachers to know of her condition.”

Then there is the trouble of standing in queues at the ART centre. Travelling also adds to anxiety, dizziness and nausea, which most patients struggle with. “Shama is being given just 10 days of ARV drugs at one time. She is on a daily double dose of DTG as the first two lines of treatment didn’t work for her.”

In a circular from NACO to all SACS sent on May 30, accessed through an RTI query, activists found out that patients were to be put on alternate regimen, instead of the daily regimen “to tide through the crisis situation as an interim arrangement”. The letter also states that till the Central supply of DTG is streamlined, DTG 50 mg has to be locally procured. “In view of the shortage of Tenofovir Lamivudine (TL) and DTG 50 mg, transition to alternate regimen may be done without viral load testing,” the circular reads. It further suggests that alternate regimens for ARV drugs with critical stock including for TL and DTG 50 mg and that patients on first line treatment may be transitioned to a single tablet.

This sudden alteration in the regime has also affected PLHIV, activists say. “A 62-year-old patient from Mumbai was put on a new regimen without proper counselling or support and she has complained of stomach issues since then. The woman already had a fatty liver. Many patients I spoke with had not been counselled adequately on the change in their medicines. There is loss of trust and people are experiencing side-effects, which no one is looking into,” says Acharya. The Maharashtra State Aids Control Society (MSACS) believes that it has managed to solve the shortage before them with help from private corporations and NGOs.

An official with MSACS, who spoke to mid-day anonymously, claimed that the shortage and stock-out in Maharashtra was a reality in April-May, but the effects lasted only till mid-June. “Through CSR and NGO donations, we have managed the stock for about two-and-a-half months. This includes ARV drugs worth R25 lakh through the Poonawala Trust for Pune district and Rs 1.5 lakh worth of medicines through Bank of Baroda for Thane district. NACO has assured us of a smooth supply from September.” He also claimed that budget proposals are in the pipeline for more procurement to take place and District Planning Committees have leveraged stock between districts depending on varying levels of demand.

But Acharya, who works with several other groups of PLHIV across Maharashtra, claims that these donations are only on paper and patients continue to suffer because of red-tapeism. “MSACS had sought CSR funds and drug donations from corporations and firms, but a change in the government has also stalled that process. Sources have informed me that they have not received the sanction to disperse medicines from this particular stock yet. So the scheme has not really paid off in the real sense; patients are still fretting and waiting for a steady supply of ARV drugs,” he says.

The MSACS official also accepted that as per guidelines, patients are to be provided with three months of medicines or at least a minimum of one month of stock. “We do not want to call patients over repeatedly, as constant travelling takes a toll on their health. So we have provided them with a month’s dose of drugs.” This is, however, not the case with most patients, who have spoken about receiving limited supply of the drugs.

Under normal circumstances, when there was no shortage of drugs, about 12,000 PLHIV in Maharashtra required DTG, as per the official. When the regimen was changed on NACO’s direction, 4,000 of these patients were diverted to an alternative drug and the total requirement was brought down to 8,000 PLHIV, he shared.

However, Dr Raj Harjani, who has been actively involved in the HIV/AIDS practice since 1994, says that shifting patients to an alternate regime has both its pros and cons. “Ideally, the viral load of a patient should be checked before alternate medication is given. If the alternate regimen does not work for a particular patient, it can lead to a problem of drug resistance,” says Harjani.

The NACO circular on alternate regime also states that patients on DTG 50 mg hould be put on Atazanavir (ATV) in combination with another drug. For patients on TL, which is facing shortage, patients should be put on TLD. But Harjani sounds a note of caution against ATV. “These drugs have fat-increasing prohibitors which in turn can cause abdominal discomfort and might aggravate any pre-existing kidney problem of the patient. It may also not suppress the virus totally.”

Meanwhile, there’s also a huge shortage of drugs for children affected with HIV. The Government of India has launched the seven-year National Strategic Plan on HIV/AIDS and Sexually Transmitted Infection (STI), which aims to attain universal coverage of HIV so as to eliminate AIDS by 2030. “But how will they achieve it, if they are not catering to the paediatric population?” asks Shankar. He points out that in the absence of daily medicine that is necessary for survival of such patients, the viral load of the disease aggravates leading to slackening immunity. He says, “This then leads to various diseases affecting the patients, who have low immunity. Their personal and professional lives are affected. They could potentially pass on the virus to high risk persons; so not one, but several members of a family are disturbed and affected.”

3.96L
No. of people living with HIV in Maharashtra according to a NACO survey in 2019

*Some names have been changed in the story to protect the identity of the patients.

Next Story : Is the world draining of colour?