The one who can sense/see it best is the wife’s mother, living right across that closed door. What does the mother make of it? 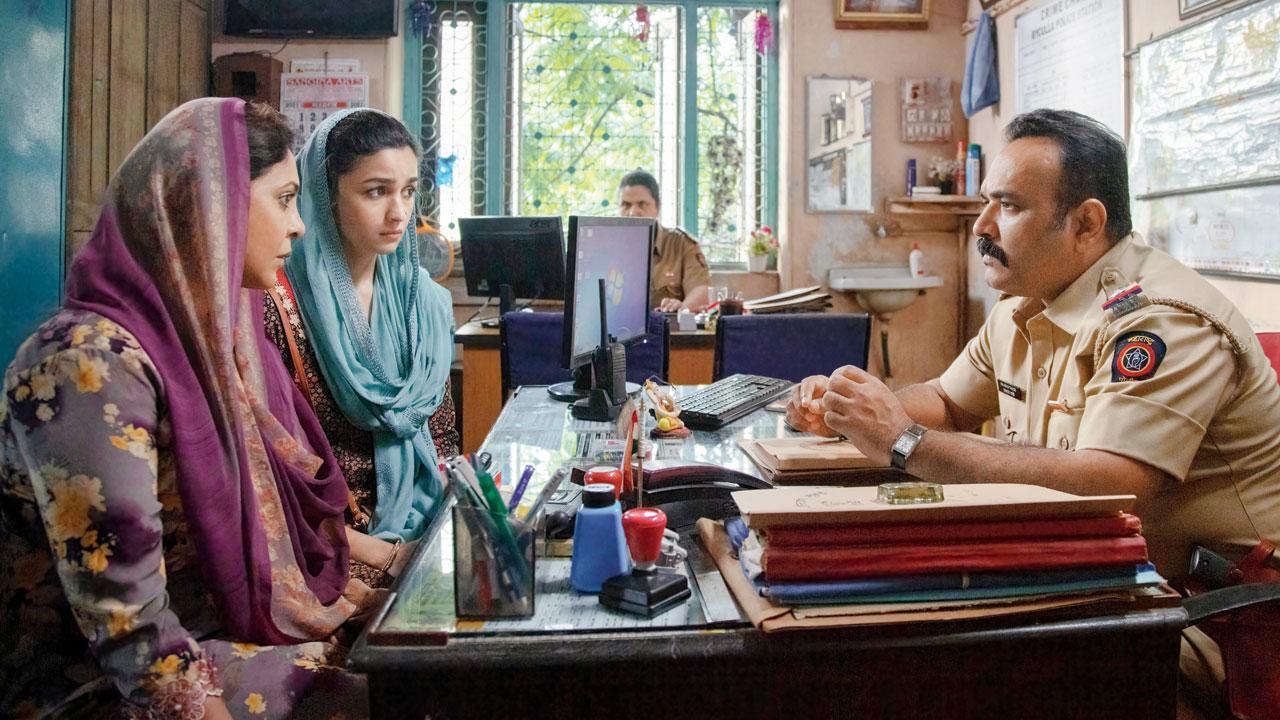 In a brave casting choice, the Malayalam actor Roshan Mathew (Choked) plays a man from one Barha Chawl in South Bombay in this movie. He’s supposedly a screenwriter, without much of a job, really. In seven years, he has written only one complete script. What’s it, though? “A horror comedy.” To which the lead actor (Vijay Varma) instantly responds, “Won’t work. Can’t mix falooda with whiskey!”

I love self-referential moments in movies, unless done so cleverly that no one’s gonna get it. The moment above though could well be this film’s writer-director Jasmeet K Reen’s take on her own script. Darlings is a film about physical abuse, indeed male violence against women in general, but more importantly, gaslighting, that probably defines most toxic relationships, between married couples, behind closed doors.

But this is not so much an obviously dark, issue-based advocacy picture, so to say. In the sense that the Deepika Padukone starrer Chhapaak (2020) was, or the Aishwarya Rai movie Provoked (2006) was as well. Instead of relying on crutches of good intentions alone, Darlings pretty much plays out like an altogether funny caper, gripping audiences with enough excitement over what’ll happen next. As is the case with thrillers, in general. This could even be a horror comedy, if you like! So what happens first?

That there’s a total kameena (sordid), bewda (drunkard) fellow—a psycho sorta guy brought to believable life, and turned so human still, in a way that few actors can, like Vijay Varma—who physically and emotionally abuses his young wife, who has nothing but love to offer him still. What kinda man beats up his wife? A “na-mard” (coward), as the line in this movie goes. But more so someone, I guess, who feels so inadequate within, that the mental dissatisfaction/insecurities get projected in violent ways towards those who can’t retaliate in equal measure.

This might well be true for power-drunk oppressors/bullies in general. Or maybe it is just the “fitrat” of some people to be a certain way—that’s just who they are—as this movie implies as well. Varma plays a railway ticket collector (TC) by profession, but the actual work involves a lot of humiliation, such as being a de-facto toilet cleaner (TC) for his boss. The frustration he lets out on his wife can be heard in the neighbourhood. The one who can sense/see it best is the wife’s mother, living right across that closed door. What does the mother make of it?

Unlike some mothers that one hears of, who normalise violence against their own daughters who, in turn, accept the same worldview, deeming it okay for her man to hit a few, this mom would rather have her daughter out of this mess, ASAP. Shefali Shah plays this mother—an actor blessed with some of the most expressive eyes, that they deserve separate award nominations of their own!

What precedes/follows that scene is of course a film simply coming together so well—on paper, therefore in the picture—that it will be considered first-timer Reen’s dream directorial debut of sorts, with actors in top form, dialogues and repartees in place, the story always in motion, each character serving a purpose, and a popular platform (Netlfix) to showcase all of it for an instantly wide global reach. Only that Darlings would’ve been just effective over a theatrical première. Especially when you absorb the music (by Vishal Bhardwaj).

Already this film’s title hearkens back to Bhardwaj’s fab track ‘Darling’ from the twisted, Priyanka Chopra led drama, 7 Khoon Maaf (2011). The number ‘La ilaaj’ (penned by Gulzar) here stands out right away. Think I loved ‘Bhassad’ more, for what it means for this movie, and that gem of a word itself! At the centre of this quietish mayhem/bhassad is the lead actor Alia Bhatt, as young, lower middleclass Badru, at the (current) times in Bombay, when chawls are receding, and builders fully taking over a city.

This is Bhatt—such an indecipherably instinctive performer, with hardly a social access to parts she pulls off—hot on the high heels of Gangubai Kathiawadi (2022), from Kamathipura, that wasn’t too long after Gully Boy (2019). Making Darlings, in effect, a trilogy of sorts, set in lower-deck Bombay, in Bhatt’s solid, eclectic filmography. If you took out the rappers and their face off from Gully Boy, what would be it if not the story of Murad and Bhatt’s Saifeena, from Kurla. Which is totally the case with Bhatt’s Badru, from Byculla. The two female leads, from a similar community/economic milieu, have only one thing in common though. They’re both fools in love. Something that can go either way. Loved the way Darlings goes—so cathartic!

Next Story : On the filmmaker’s chair