India's Most Wanted Movie Review: Bit of an empty shell

India's Most Wanted is kinda fast-paced, a rudimentary thriller with background score guiding your every move, but two hours plus runtime simply appears an hour too long. 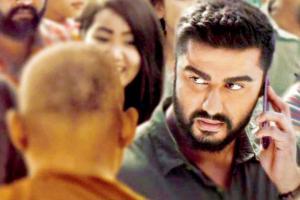 Won't exactly call this Zero Dark Tatti; hell, no. This is a half competent picture, as against a complete washout. It is set up as a man-hunt for 'India's Most Wanted'. That epithet usually belongs to the absconding Dawood Ibrahim. The analogy the filmmakers use is of 'India's Osama Bin Laden'.

The target, if I'm not mistaken, is called Yusuf. He's singularly the mastermind behind a series of bomb blasts taking place in quick succession across the country, while the intelligence community is convinced that the perpetrators are either based in Dubai or Pakistan. Which isn't the case.

But the shoddiness with which this subject is approached by the nation's military/ruling elite can be immediately gauged from one of the film's opening scenes, where the big politician rounds up his defence top-brass in what looks like a college/school staff-room.

The sequence equally pans out like a hyperbolic dramatic society production, with a bhajan the top politician plays for his demoralised team, and an assistant who barges into the room to suggest, "Sir, we've found a picture of the main suspect!" Or something to the effect. You get the picture.

That said, this isn't an indoor political drama bordering on parody, although all such scenes, involving both the Indian and Pakistani establishment, appear so. The movie is mainly designed like an espionage thriller, along the lines of say Neeraj Pandey's Baby (2015), Aiyaary (2018), if you may.

Also Read: Arjun Kapoor: Women in our country don't get their due, nor do they get the right to choose

It is chiefly set between Patna and Nepal, both of which are captured almost entirely through vertigo-inducing overload of aerial shots. Because, I guess, drone cameras have just made them cheaper to execute.

At the centre of this man-hunt is a Bihari intelligence dude. Arjun Kapoor plays this lead role with a quiet coolness -- a sort of Ajay Devgn type insouciance if you like. For one, he gets his Bihari accent pat-on.

He leads a rather rag-tag team of neatly cast intelligence operatives. All of them wear patriotism on their sleeves -- even willing to put their money, where their jaw-dropping mouth is. But nobody in the government cares for their dangerous mission.

This is quite in line with the generally accepted notion that the UPA government in Centre at the time (around 2008) was extremely soft on terror. As against the perceptively decisive folk who backed the 2016 surgical strikes in Aditya Dhar's stellar Uri (2019).

Here's the rub though. Unlike director Raj Kumar Gupta's films Aamir (2008), No One Killed Jessica (2011), and most recently, Raid (2018), which were first-rate investigative dramas/thrillers, there is hardly any (written) material/script here to pull off a similar film in the spy space, with competing bends, twists, turns, or even a bunch of back-stories, directed at the man-hunt. And given no mortal combat, let alone warfare, this isn't quite a military action picture, or Zero Dark Thirty, either.

What plays out essentially is a Run Lola Run (1999) kinda fast-paced, rudimentary thriller with background score guiding your every move, and heightened the drama in every scene to fill up time. Frankly, nothing really happens for you to care enough. And the movie at two hours plus simply appears an hour too long. Ah! Felt like an empty shell -- well, to me, anyway.

Top Entertainment Stories of the day:

Next Story : Pilates girl Sonakshi Sinha gets back in the groove