Kabir Singh is definitely not a film you can watch with your family. Your partner or friends are the perfect company to watch Kabir Singh with. Kabir Singh will make you laugh, cry and love, and do it all with a lot of passion. 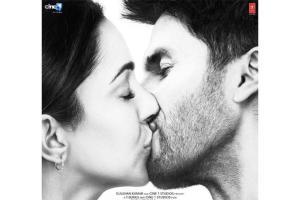 How deep can you dive in love? How far can you go for it? Can love hamper you and your career? Is love a distraction? If these questions pop into your mind, then Shahid Kapoor and Kiara Advani's Kabir Singh is the answer for you. The love story is not limited to what is shown in the trailer; there's more to what meets the eye. Shahid Kapoor plays the titular character of Kabir Singh, who is an outstanding student, brilliant surgeon, and who deals with anger management issues. The entry scene of Shahid Kapoor is well-established, which describes his persona of an alcoholic and a drug addict.

Shahid Kapoor falls in love with a pretty girl, Preeti (Kiara Advani), in college. He is shown as the poster boy of passion, and the kind of possessive boyfriend who would go to any length to protect his love. Kiara Advani as an innocent college girl, who gives in to whatever Shahid Kapoor says, is a bit difficult to digest. The first half fails to delve into Kiara's character. They fall in love at a tender age, and their love develops with time to a stage where things don't work in their favour and the main plot of the film begins.

The first half of the film is loose with the college scenes stretching a bit far. The script feels weak in places with no understanding of why things are happening in the first place. In other parts, it's too fast-paced. The first half is about the honeymoon phase in Kabir and Preeti's love life. The second half of the film is all about Kabir's anger and how he devastates his life due to it. Arjan Bajwa plays Shahid's brother, a strong character who stands rock-solid throughout for his younger sibling.

Shahid Kapoor's friend plays the perfect character of a best friend, who no matter what is there for him during his happy and trying times. Kabir Singh is the remake of the Telugu film, Arjun Reddy. The Bollywood remake is directed by Arjun Reddy's director Sandeep Reddy Vanga. The scenes in Kabir Singh are similar to Arjun Reddy.

Check out the trailer of Kabir Singh:

Shahid Kapoor is outstanding in the film. He is, undoubtedly, one of the most underrated actors in Bollywood. This story is quite an unconventional romance, which deviates from the regular stories offered by Bollywood. Kabir Singh isn't glorified like the regular Bollywood hero. Love him, hate him but you can't ignore him. It's definitely not a film you can watch with your family. Your partner or friends are the perfect company to watch Kabir Singh with. Kabir Singh will make you laugh, cry and love, and do it all with a lot of passion.

Also Read: Kabir Singh: Here's why Kiara Advani stayed in a hostel for a week

Top Stories of the Day:

Next Story : Why does Janhvi Kapoor call herself old fashioned?